Even in the safest communities where everyone knows everyone else, police must train to prepare for school shootings, encounters with drug smugglers along Interstate 80, traffic stops gone awry, high-speed pursuits, and an increasing number of calls involving mental illness. It’s a changing job in a complex world, and rural law enforcement must plan and train for situations that were once unthinkable.

In Small Town Cops, experienced and newly-trained officers explain what’s different and why they still believe in serving and protecting their communities.

“It’s a scary thought to think that it’s going to happen in our town,” said Officer Regina Preston with the Mitchell, Neb., police department. The town’s police force, serving 1,600 people in Scotts Bluff County, logs less than 100 crimes each year, but the department takes on a multitude of other tasks assigned by the community to help keep the community safe, clean, and healthy.

Rarely is there violence. Nonetheless, these are times when even the smallest law enforcement agencies must prepare for the unknown.

“The ones that are on the beat are now tasked with more responsibility than has ever occurred in the history of American law enforcement,” said Mike Kerby, an instructor with the Nebraska Law Enforcement Training Center (NLETC) in Grand Island. The Center provides training for ordinary and extraordinary situations.

In recent years the pressures come from within their communities, as shrinking populations may be unable to pay for the increasing cost of law enforcement. As a result, dozens of communities have given up a local police force and contracted services with the county sheriff’s office. 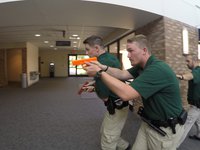 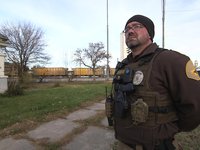 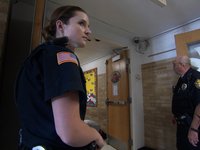 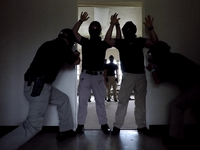 Other
More Nebraska Small Town Cops Training for Horror of Mass Shootings
For the kids at Mitchell, Nebraska's elementary school safety drills are part of the routine. They practice how to respond in case of a tornado or if a fire breaks out. For the past three years, they also rehearse what they need to do if someone shows up with a gun.
Other
Isolation and Darkness: Common Concerns for Small Town Cops
"There's bad things that can happen in the dark."
News
Milestone Training Class Gives New Nebraska Officers a Heavy Dose of Blood, Sweat, and Fears
It only took a few hours of basic training at the Nebraska Law Enforcement Training Center to understand the following 16 weeks will be a physical and mental challenge.
Support Grows for Reducing Use of County Jails for Nebraska's Mentally Ill
Too many people are being housed in Nebraska’s county jails without getting necessary mental health treatment, according to local law enforcement officials and mental health professionals.
News
New tactics, training aim for greater SWAT team safety
SWAT teams in Nebraska are moving a little slower. Changes in methods and training used by the police special tactics units have been evolving in the hopes of making high-risk raids safer for officers.
Other
Small Town Cops: NET Documentary Captures Changes in Rural Law Enforcement
It’s common to hear about the worst abuses in law enforcement and just a common to hear about their heroics. It’s not often you get a chance to see what life is like on the beat in some of the smallest police departments.
Share on Twitter
Share on Facebook