Today, it would be surprising to see a rhinoceros roaming Nebraska, but rhinos were a highly successful group of medium and large mammals in North America for over 30 million years.

Three families of fossil rhinos are recognized but all living rhinos fall into one family. Unlike today's rhinos, the early species had no horns. Most species had three toes but a few early species had four toes. Today’s rhinos have three working toes with the center toe bearing the most weight.

They favored locations near streams rather than swampy plains.

Early rhinos lived in forests, with some species favoring areas near rivers and others more open areas. Many later rhinos favored grasslands and other open areas. 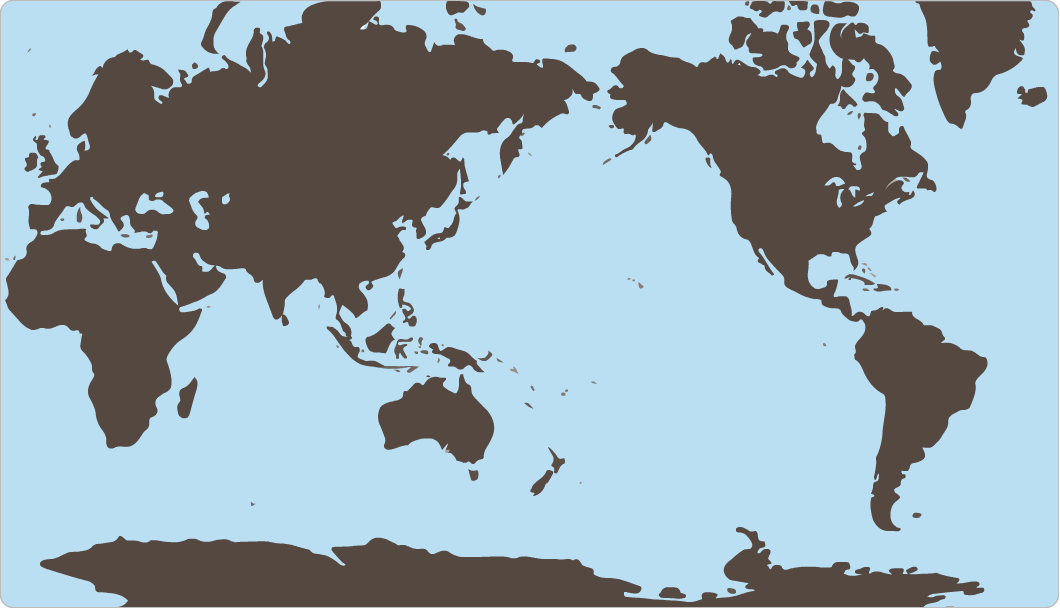 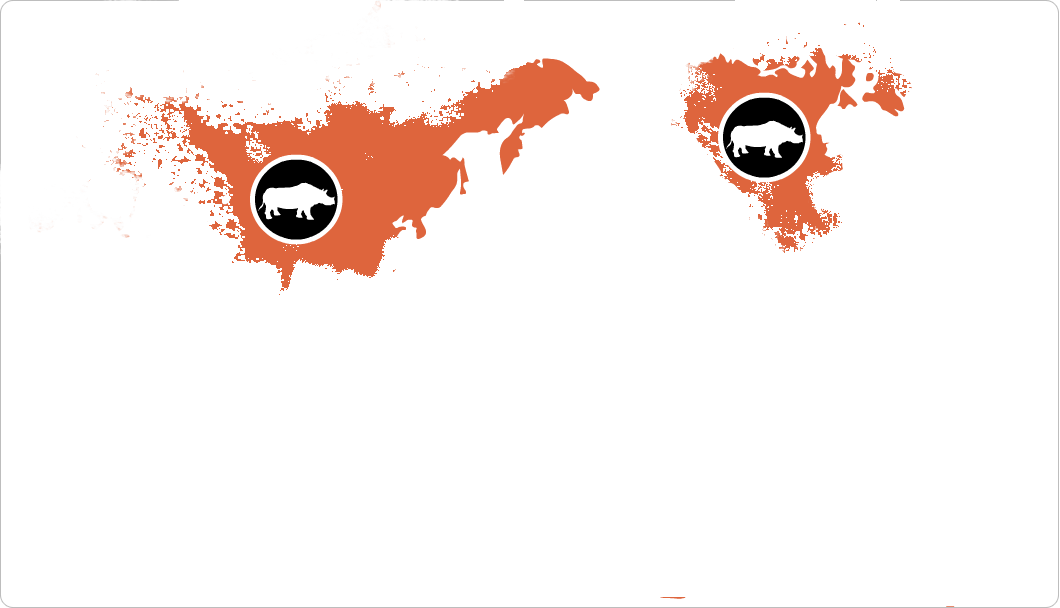 Rhinos were once more varied and existed in greater numbers over a wide geographic region, including the Badlands of the western United States. 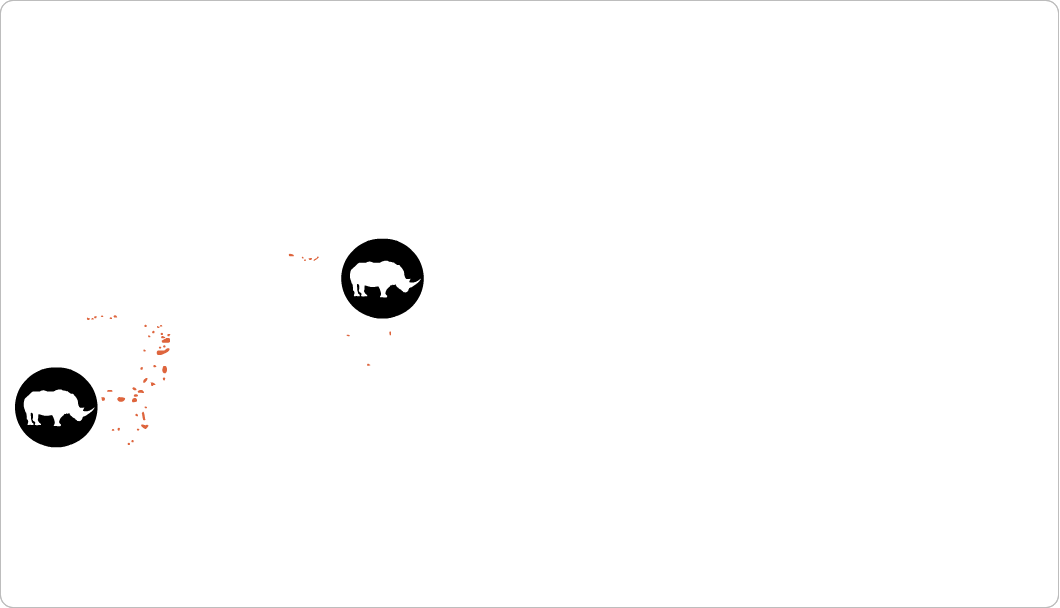 Now, rhinos are on the decline due to loss of habitat from humans. Today, the four living genera and five species of modern rhinos are native to Africa or southeast Asia.
38 MYA
TODAY

See this family tree to find out how the rhino changed, gaining size and horns, as it adapted to changing climates and locales.

The Modern Rhinoceros (10,000 YA - present): The modern species of rhinoceros are varied, with three that have nasal and frontal horns. Some species still have upper or lower tusks while others lack these teeth.
Subhyracodon (36-16 MYA): The size of a cow about 8ft. long this genus had no horn. It used its speed to escape predators. As an herbivore it had browsing teeth and was a ground dweller.
Diceratherium (28-12 MYA): This genus was related to Menoceras or crescent horns, and lived in North America, Europe, and Asia. The male had a pair of horns side by side on its nose, while the female had no horns. Diceratherium weighed about one ton.
Peraceras (21-10.3 MYA): The Peraceras had a broad and but short skull. It was hornless with shortened nose bones (nasals). Considered as a grazer it outnumbered Aphelops and Teleoceras in the west and southwest but was not common in Nebraska.
Aphelops (21-5.3 MYA): Aphelops means smooth-faced hornless. Even though it did not have a horn or an upper tusk, it sported a round lower tusk. The skull of this rhino was upswept and it had low-crowned molars for browsing. Aphelops became progressively larger through time and had legs proportioned similar to most modern rhinos, longer than Teleoceras. Specimens were found in the Ashfall Fossil Beds.
Teleoceras (18-7 MYA): Also called ;Barrel-bodied Rhino. Teleoceras had a body shape similar to the modern hippo with a chest circumference of 10 ft. Its name means perfect horn. Bumps at the end of their nasal bones indicate they had horns. Both the males and females both had horns, with a triangular lower tusk in addition to the horn. Probably lived in harems led by single males. Specimens were found in great numbers at the Ashfall Fossil Beds. 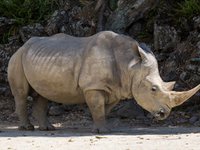 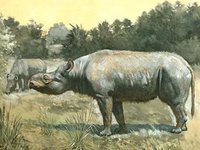 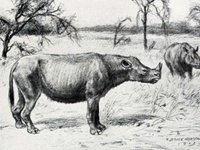 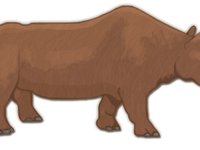 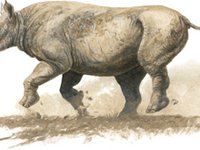 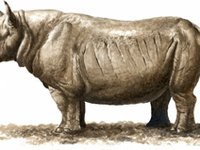 This state has supplied many pieces of the puzzle that help form the picture of changing climate and habitat, and its relationship to rhinoceros evolution.

At Bassett, a site from the late Miocene (about 8 MYA), the presence of tortoises and warm-climate rodents, shows the climate was warm-temperate with winter temperatures not going below freezing for many days. These were mild temperate grasslands. Historical work was done here by paleo sleuth Shane Tucker.

Fossils from herds of rhinos (Teleoceras) were found at Ashfall Fossil Beds, where many communities of animals perished and were rapidly buried by a cloud of volcanic ash over the course of one to two months. This middle Miocene site from 12 MYA had a warm climate with mild winters. Grassland dominated with small patches of forests. Historical work was done here by paleo sleuth Mike Voorhies.

At Agate Fossil Beds, bones and teeth of the rhino Menoceras are a common part of the bone beds. The wind-blown sands, dunes, and mass death assemblages offer clues to a period of extremely dry conditions that took place in Agate.

At Toadstool Park, a site with specimens from the late Eocene and the Oligocene (about 38-28 MYA), several now-extinct groups of mammals have been found, including the families of primitive rhinos. Subhyracodon is probably the animal that made the large tracks preserved at Toadstool. Toadstool samples an environment that was partly forested and partly open before the spread of grasslands. It was warm, temperate and transitioned from moist, and lush vegetation in the Eocene to drier, more open habitats in the Oligocene. Historical work was done here by paleo sleuth Erwin Barbour and many others. Recent work on the ancient ecosystem at Toadstool was done by paleo sleuth Ross Secord and his student Grant Boardman.