Elephants belong to the order Proboscidea—animals with trunks. Proboscidea is Greek for “having a nose.”

At various times, proboscideans have lived on each of the continents on earth except Australia and Antarctica.

The trunk may have initially evolved to serve as a snorkel, allowing the animal to spend long periods under the water's surface. In modern elephants the trunk serves as extra “arm and hand” for gathering food that would otherwise be hard to reach.

Though there have been scores of species in the order, only two have survived into recent times.

Why did all the other families of the order Proboscidea go extinct? Evidence suggests that North American mammoths and mastodons were hunted to extinction by the first humans to reach the continent. Some scientists also argue that warming climate played a role in their extinction.

Paleo sleuths continue to piece together the mystery of why some species vanish and other go on. 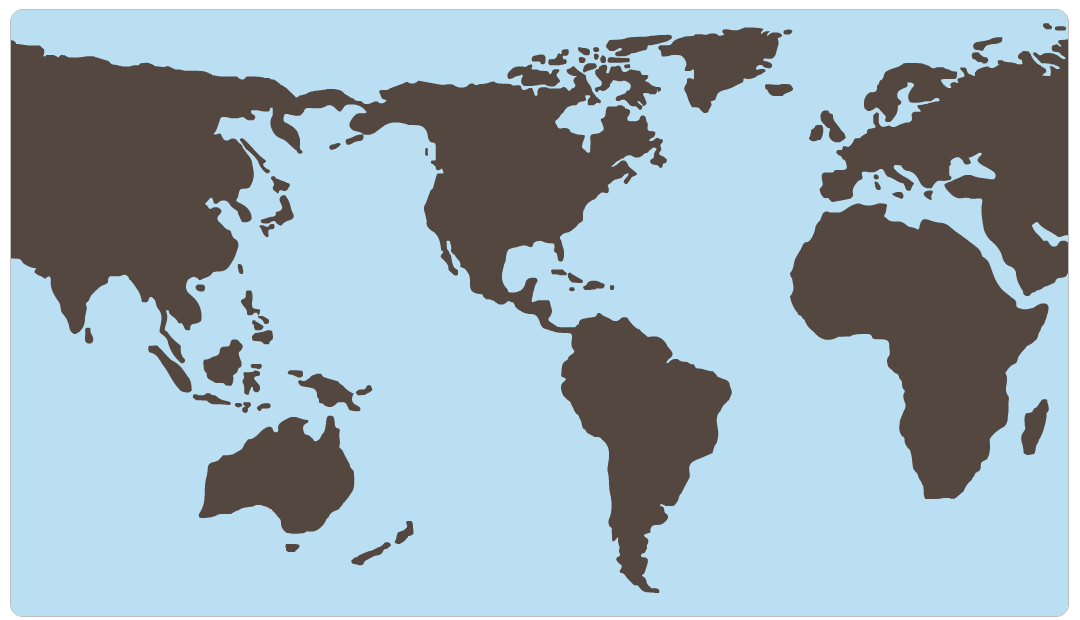 It might be hard to imagine it now… but elephants once roamed Nebraska. Of course, they didn’t start out there. 56 million years ago, elephant species originated in Africa and remained there for the next 33 million years. 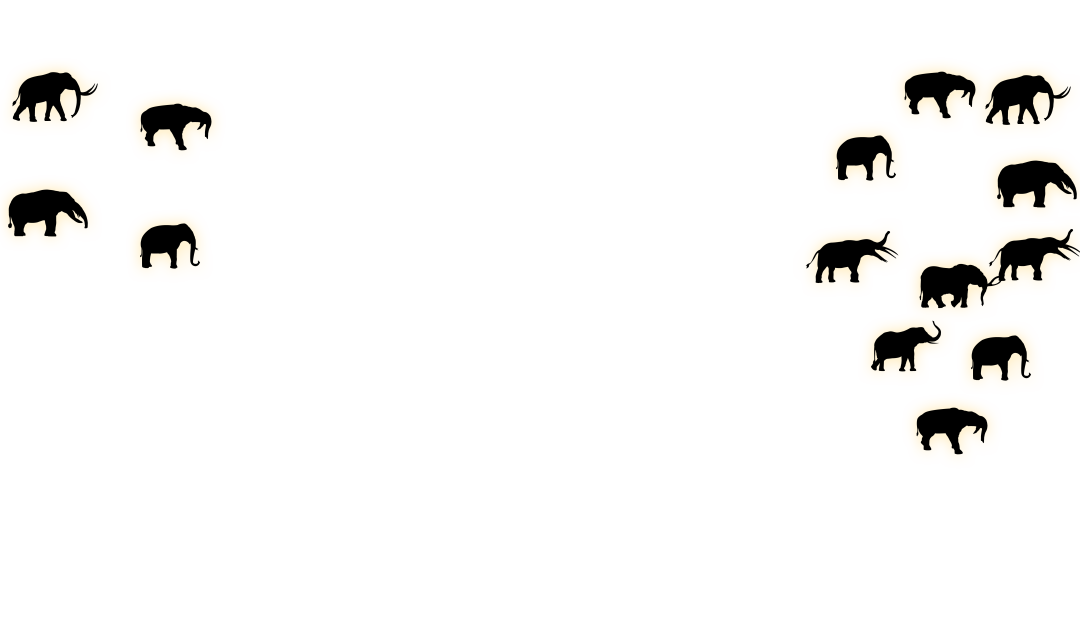 20 million years ago, elephant ancestors spread across land bridges from Africa to Europe to Asia. 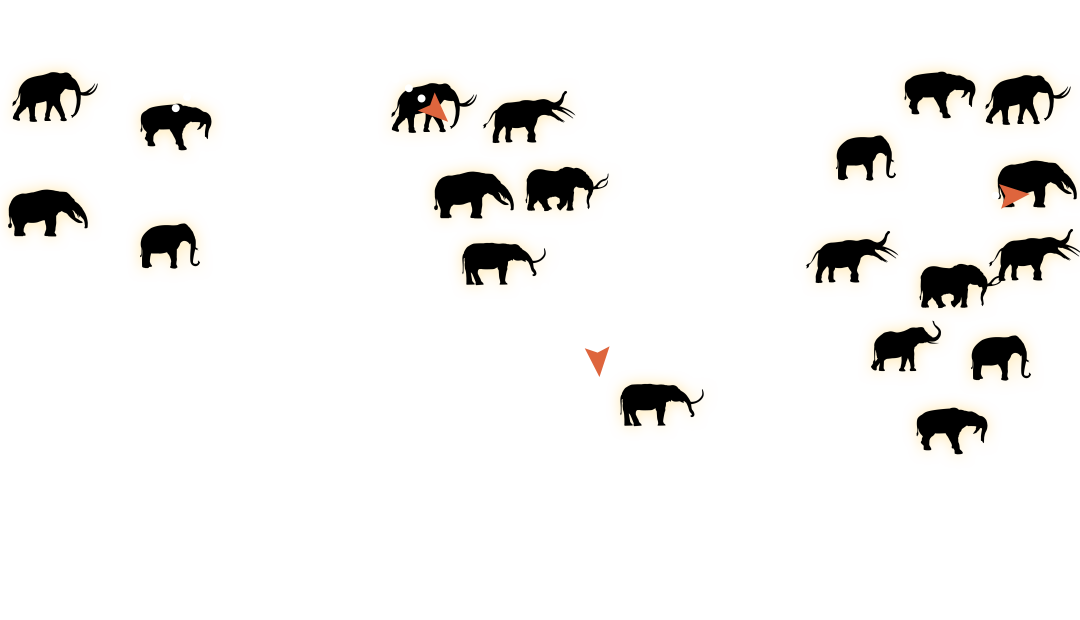 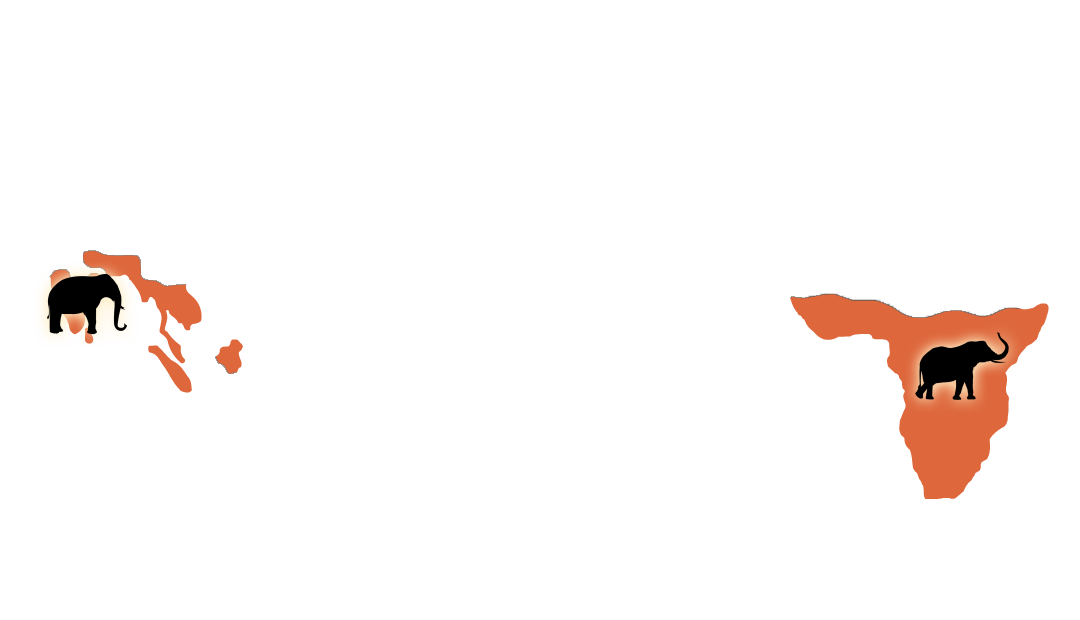 Elephants died out completely in Nebraska and in many parts of the world. Today, only three species remain in Asia and Africa. 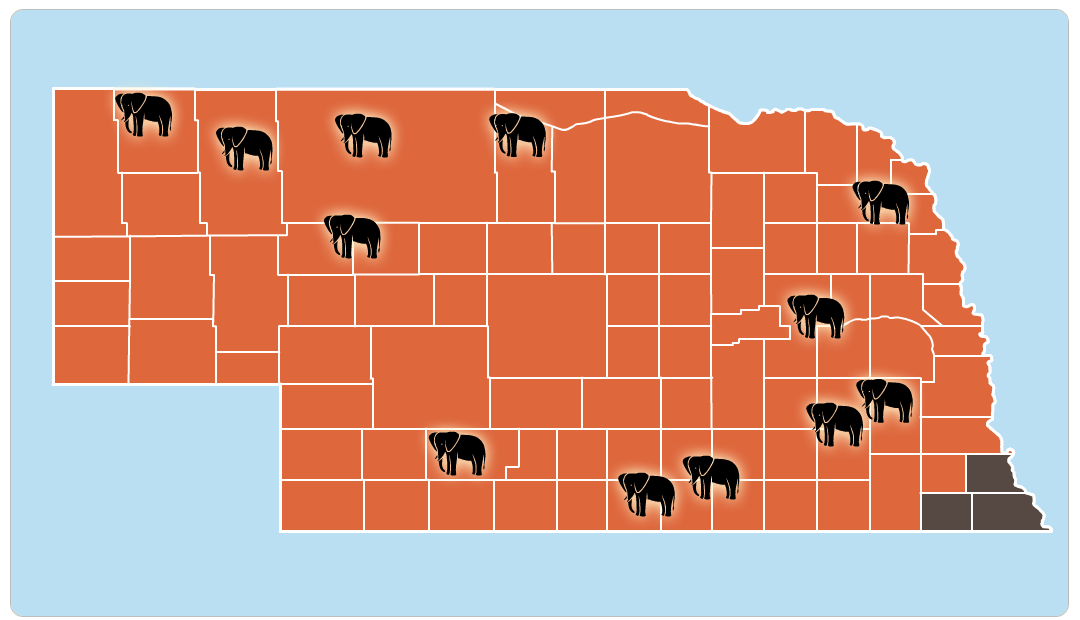 Learn more about out how the elephant evolved from a smooth-faced, four-tusked beast to the familiar pachyderms we know today.

Moeritherium (40-28 MYA): Ancient relative to the elephant and sea cow. The Moeritherium did not have a trunk but had a flexible upper lip that allowed it to grasp vegetation to eat. It stood about 2 feet tall and was about 10 feet long. It dwelled in swamps and water and had a lifestyle similar to the modern hippopotamus.
Palaeomastodon (28-23 MYA): Closely related to the Moeritherium with characteristics of scoop-shaped lower tusks, used to dredge plants from flooded riversides and lakebeds. Unlike its ancestor it had a trunk with long, lower jaws and short upper and lower tusks.
Hoe Tusker also called Deinotherium (38-2 MYA): Deinotherium belonged to a separate family of elephants living in the Old World. Its characteristics include two downward curving tusks that were good for digging. Unique in that they did not have tusks in their lower jaw.
Scoop Tusker also called Platybelodon grangeri (23-5 MYA): Thought to have lived in swamp areas and scooped up algae and crops but may have actually used their long jaws (two large extensions that looked like teeth) to scrape trees for bark. Some controversy on whether this mammal should be considered a shovel tusker.
Prod Tusker also called Gomphotherium and Four Tusker (14-1.2 MYA): Originated in North America the bulldozer, short and stocky built for power with a massive jaw they plowed through the lush forests of Nebraska. The Prod Tusker had a long, low skull with a short trunk and two tusks on the upper jaw, two on the lower. The lower tusks were used to scoop food from the mud. Know as America’s most ancient elephant.
Long Jawed Tusker also called Megabelodon lulli (22-12 MYA): Found in the Nebraska Niobrara River Valley. This Four Tusker did not have tusks in the lower jaw, but had a flexible lower lip.
Perfect Tusker also called Eubelodon (12 MYA): The Perfect Tusker was the size of the modern Asian elephant and thought to have fed on treetops with long legs and long trunks with short jaws. The shorter jaw allowed for a long, modern style of trunk. It had two large upper tusks and No lower tusks, unlike other gomphotheres. Specimens found at Ashfall Fossil Beds.
Shovel Tusker also called Gomphotheriidae (24 MYA - 10,000 years ago): This Four Tusker had lower tusks that were used to scoop food from mud, a long, low skull and a short trunk. Gomphotheres, a separate family of elephants and was ancestral to modern elephants. It was eplaced by more advanced elephants in the Pliocene. Extinct in North America by 2 MYA but survived in South America until 6,000 years ago.
Short Jawed Tusker also called Stegomastodon (3 MYA - 10,000 years ago): Not really a mastodon but a gomphothere, it was considered to be the last of the Four Tuskers. Their name means &#8220;roof nipple tooth&#8221; they had two, upward-curving tusks. Migrated from North America to South America 3 mya, where it survived into the Ice Age.
Mammoth Archie also known as Mammuthus (5 MYA - 4,500 years ago): Also called mammoths, the largest mammals to have existed in the Great Plains, the adults could be more than 13 feet tall. Both males and females had long, curved tusks and corrugated teeth that enabled them to grind grasses. Ancestor of modern African elephants but not Asian elephants, is known as Nebraska’s state fossil.
American Mastodon also known as Mammut (12 MYA - 10,000 years ago): It roamed North American and then mysteriously became extinct around 10,500 years ago. Most likely due to changing climate that was warmer and drier. Their name means earth burrower and comes from the European farmers who discovered mammut fossils and thought they belonged to huge, burrowing animals.
African Elephant also known as Loxodonta africana (2.5 MYA - Recent): Characteristics include a swayed back, tapered head with large ears and trunk with two extensions. The male and female both have tusks.
Asian Elephant also known as Elephas maximus (2.5 MYA - Recent): Characteristics include an arched back, large domed head with small ears and trunk with a single finger or extension. Only the male will have tusks. 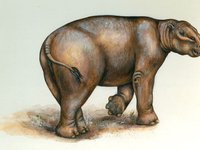 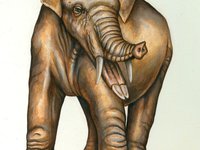 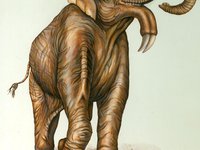 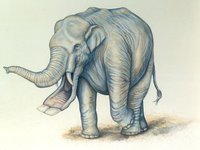 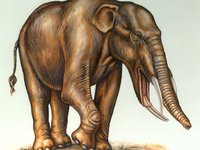 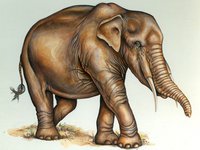 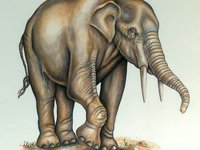 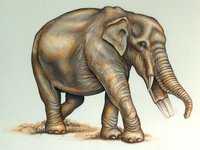 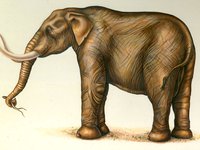 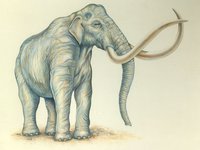 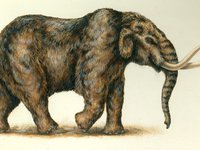 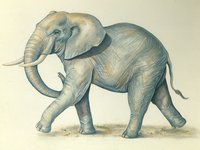 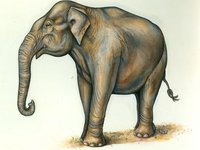 A Historical Perspective on Elephant Evolution

Nebraska's Pieces of the Puzzle

This state has supplied many pieces of the puzzle that help form the picture of changing climate and habitat, and its relationship to elephant evolution.

At Ashfall Fossil Beds, a middle Miocene site where volcanic ash overwhelmed whole communities of animals, excavations revealed specimens including a jawbone of a short-jawed four-tusker or Eubelodon in the sand layer below the ashbed. The water hole was situated in a depression amid warm grasslands and riparian (river-related) forests. Historical work was done here by paleo sleuth Mike Voorhies.

Norden Bridge, a middle Miocene site from about 14 MYA, was host to the first elephants in Nebraska and had the greatest diversity of animals from any terrestrial fossil site in the world, according to Mike Voorhies. The Gompotheres or four tuskers at Norden Bridge lived in a warm, temperate, forested habitat along stream channels. Winter temperatures were mild and did not go below freezing for long periods (indicated by the presence of species like tortoises that could not tolerate freezing). It was home to both grazers and browsers, and was an environment with several habitats. Historical work was done here by paleo sleuths Morris Skinner and Mike Voorhies.

Oak, a site from the late Pleistocene (about half a million years ago), had specimens of mastodons and mammoths, along with many browsers and a few grazers. Pine and spruce pollen were also found there. Historical work was done here by paleo sleuth Mike Voorhies.