Brontotheres are extinct. It's known that these thundering creatures are perissodactyls.

But it hasn’t been determined how they are related to other perissodactyl groups such as horses, tapirs, or rhinos. Even though there are much older perissodactyls, brontotheres are often viewed a one of the most primitive members of the group.

Though they were living at the same time, Brontothere species developed differently on two different continents for much of their history. 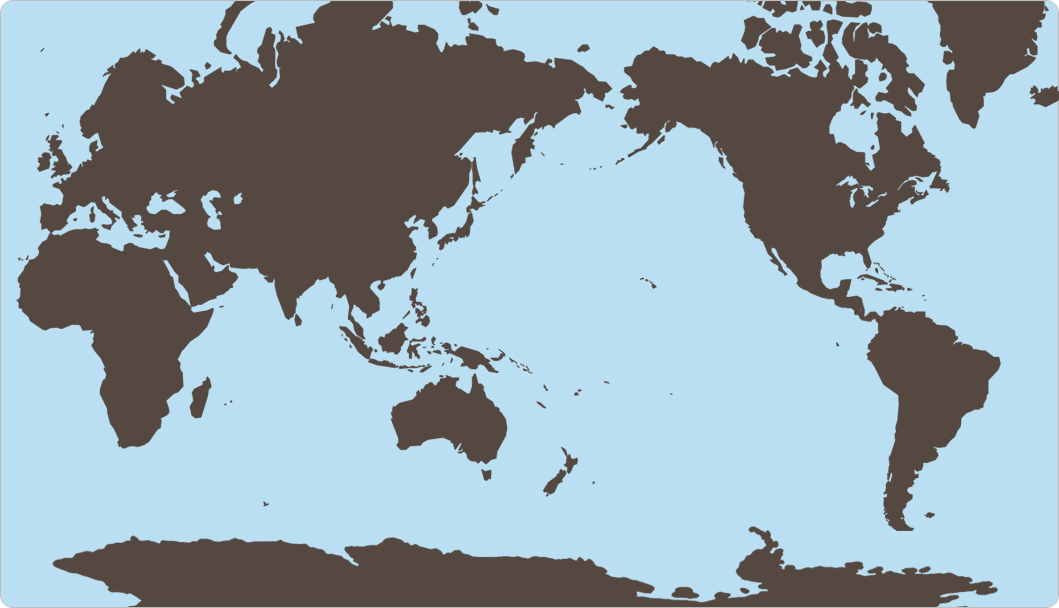 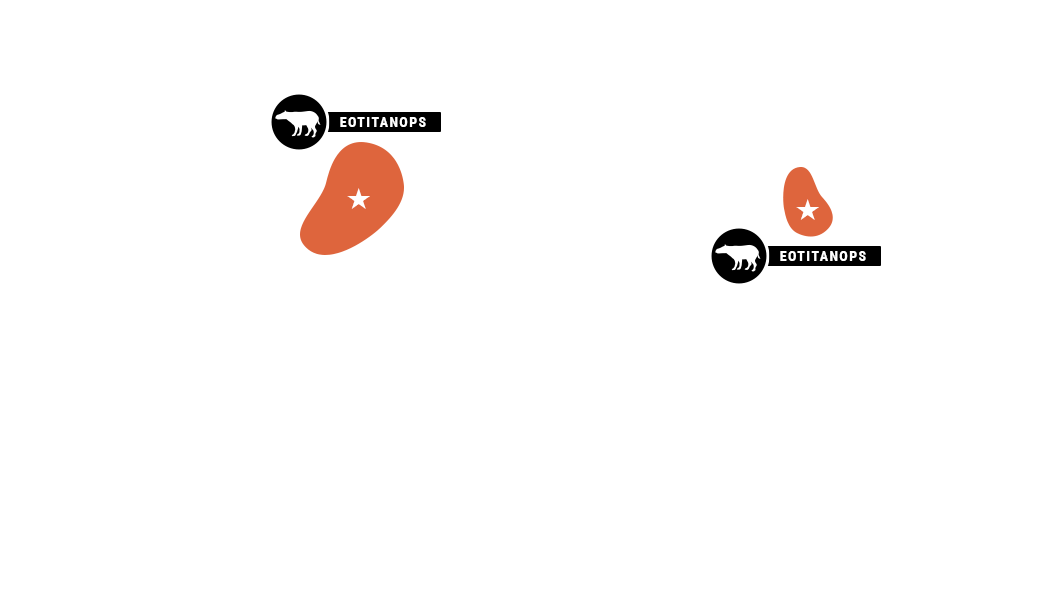 Brontotheres appeared 54 million years ago and evolved in North America and in Asia. 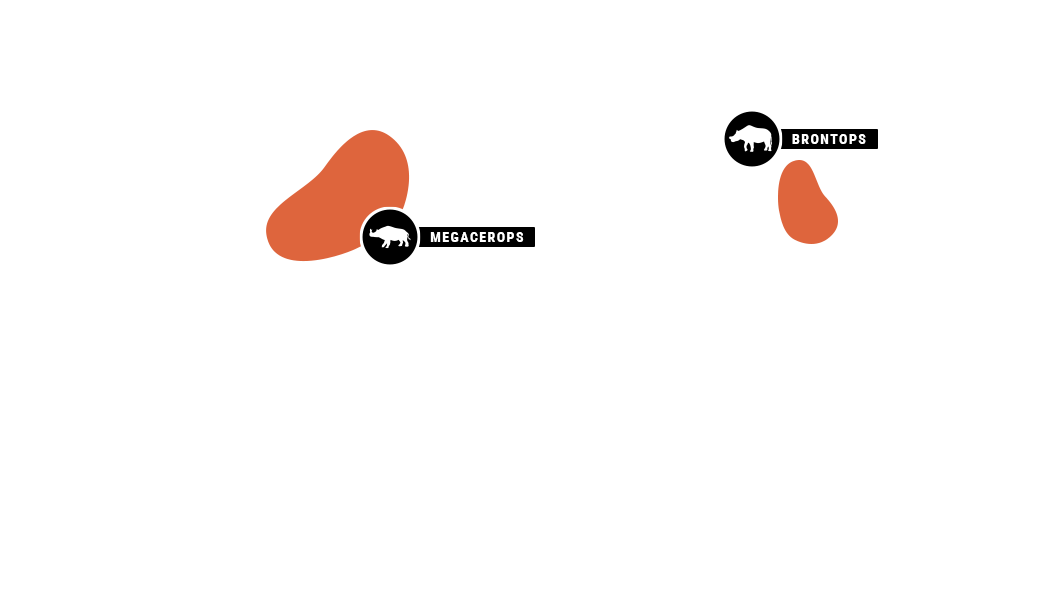 In North America, Brontothere species evolved to have larger bodies with pairs of horny appendages on their skulls, useful for fighting and protecting young. Fossils of the two main species that evolved have been found in northern Colorado, western Nebraska, eastern Wyoming, the South Dakota badlands, and as far north as Saskatchewan.
In Asia, Brontothere bodies also grew large, rather than a pair of horns they had a single structure like a battering ram made up of the nasal and frontal bones.
Despite their widespread populations and dramatic variations, Brontotheres went extinct worldwide as the dense parts of the forests in which they lived gave way to more open forests at the end of the Eocene epoch.
54 MYA
38 MYA
34 MYA

An ancestor that came to be known as the “Thunder Horse” was small (dog-sized) and hornless. But it went on to much bigger things, such as Dolichorhinus, which had an elongated skull.

Brontotheres evolved to have large bodies—larger than a modern rhino—and pairs of big, bony appendages on their skulls.

One of the last brontotheres Megacerops, had slingshot-type bone formations above the nose. These were larger in males. Their strong neck suggests the bony appendages could have been used for headbutting or knocking over others using head thrusts. The female Megacerops had her own smaller appendages, which she might have used for protecting calves from predators.

Asia evolved different types of Brontotheres, such as the Embolotherium, which had a gigantic body. Instead of a pair of intimidating horns, it had a single long, bony structure made up of nasals and frontal bones that formed a battering-ram-like horn. It also had huge nasal cavity, good for making loud sounds for communicating long distances.

Though they looked foreboding, and would have been a fierce adversary if challenged, all Brontotheres were vegetarians.

Brontothere Life in the Eocene

Before elephants arrived, Brontotheres were the largest mammals in Nebraska.

Like elephants, Brontotheres evolved from small animals no bigger than a pig, but grew to enormous sizes. Both were browsers (leaf-eaters). Both developed tusks.

Cooling and drying trends led to the disappearance of the densely forested habitats that brontotheres required, resulting in their abrupt extinction at the Eocene-Oligocene boundary when global climates rapidly changed.

Brotontheres were the largest North American mammals on the continent during the Eocene. The largest were 14 feet long and eight feet tall at the shoulder.

The body resembled a rhino, but it had legs and feet like an elephant. The head was large, but the eyes were small and located on the front of the head. Ears were situated at the back.

Their mouths were evolved to cut and crush plant material, including leaves with short-crowned molar teeth.

As Brontotheres evolved, the core of their horns grew larger and longer. They had fewer incisors, which might have been related to development of a prehensile (able to grasp) lip. Their nasal canals shortened.

Dozens of North American brontothere species of late Eocene age have been named based on differences in horn shape. Recent works, however, have concluded that the horns were highly variable within a single species. This conclusion was only possible after studying large collections of skulls occurring together from the same areas and discovering that one shape grades into another. Currently, only one genus (Megacerops) of brontothere is recognized in the latest Eocene of Nebraska. The “Thunder Horse” or “Titanothere” was plentiful in Nebraska, and many specimens were left behind before they abruptly disappeared.

Nebraska's Pieces of the Puzzle

This state has supplied many pieces of the puzzle that help form the picture of changing climate and habitat, and its relationship to Brontothere evolution.

At Toadstool Park, a rich site with specimens from the late Eocene into the Oligocene (about 37-28 MYA), several now-extinct groups of mammals have been found, including Brontotheres (“Titanotheres”). They lived in a densely forested, specialized habitat. It was warm, moist, and fairly lush. Historical work was done here by paleo sleuths OC Marsh, Erwin Barbour and Mike Voorhies. Joseph Leidy also did work involving specimens from Toadstool Park. More recently, paleosleuth Ross Secord, along with his graduate student Grant Boardman, applied stable isotopes to brontotheres and others extinct mammals from Toadstool Park to determine the types of habitats in which they lived, and to learn how these habitats changed across the Eocene-Oligocene boundary. They found that brontotheres occupied the most densely vegetated habitats present, in contrast to earlier depictions of them living in open areas, and that these densely vegetated habitats shrunk across the boundary in response to a drying climate [Boardman and Secord, 2013, published in Palaeogeography, Palaeoclimatology, Palaeoecology].