At a time when Husker fans were longing for a ‘winner’, the Nebraska Husker Volleyball team did not disappoint in their run for the 2015 National Championship.

Entering the season with low expectations didn’t stop the program from setting the lofty goal of winning its fourth National Championship – and this one would be in front of its home-state crowd at Omaha’s CenturyLink Center (now CHI Health Center). We were there to capture all of the electric moments as the Huskers battled their former Big 12 conference rival Texas Longhorns in front of a record-setting attendance.

We pulled back the curtain on the program to show the commitment and dedication it took for the Huskers to build a championship team, through interviews with players, coaches, fans and media experts. Viewers will also be inspired by the highlights and low moments that played out during the five-month roller coaster season. In addition, viewers will get a preview of the high expectations the program had for the 2016 season. This documentary sets the stage for many great Nebraska Volleyball milestones to come. 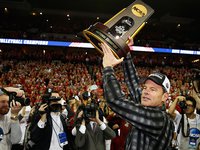 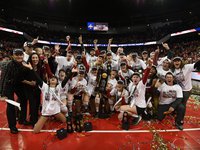 Nebraska Volleyball fans helped set the new NCAA record for highest attendance of a college volleyball match at the 2015 National Championship. 17,561 fans stormed the CenturyLink Center in Omaha to set the stage for a fourth national title, as Nebraska swept Texas, proving Nebraska fans are regarded as the "best fans in the nation".