Women's March in Lincoln Brings Thousands to the Streets 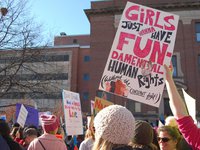 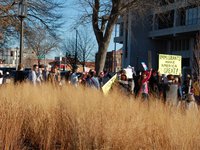 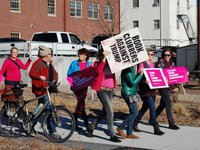 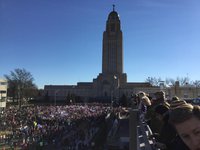 A Saturday protest in Lincoln brought thousands of people to the streets in support of equality, human rights and women empowerment.

The day after President Donald Trump’s inauguration, thousands of people gathered in downtown Lincoln in a peaceful demonstration. They joined millions of demonstrators around the country and the world participating in the Women’s March on Washington.

Hallie Yousif explained her reason for marching: “We’re all people and we all deserve the same basic human rights. And we need to protect our earth and really take a stand and be known that we’re still here.”

Joan Blomsted was with her young niece Katherine, and said it's important young women were part of the march. “They can learn that they don’t have to sit down, they can stand up and speak for themselves. And I think it’s just amazing this turnout in Lincoln, Nebraska. It’s amazing to me.”

As for Katherine, “I’m following in the footsteps of what my grandma did, my great-grandma did and our ancestors that suffered through everything else like this,” she said.

Saturday afternoon, a diverse crowd of women, children and men gathered at the University of Nebraska, then made their way to the steps of the state capitol. They carried colorful signs and banners, wore pink knitted hats, and periodically broke into cheers or chants. 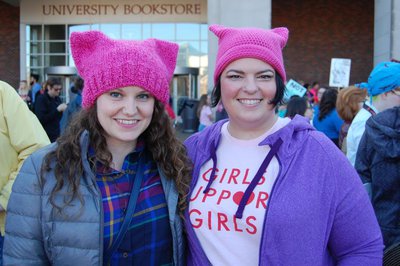 Laura Beahm of Hastings and Shannon Cameron of Lincoln show off their pink hats from the PussyHat Project, which Cameron said is a way of showing solidarity with the Women's March on Washington in response to Trump's statements about women.

Organizers stressed the event was not an anti-Trump protest but rather a demonstration in support of equality, human rights and justice, particularly for marginalized groups. But many signs and demonstrators took direct aim at the new President’s campaign statements or rhetoric.

Aida Goitom, a student at UNL, said she was “here to be with a bunch of other nasty women, marching for what we think is right.” Her sign read, “Gender Justice, Racial Justice and Economic Justice.”

John Taylor was handing out about 1000 black stickers with the image of safety pin. “A safety pin means that you personally are a safe place for somebody who feels that they’re being terrorized. The message has grown a little bit, it also means that you reject everything that the new administration stands for,” Taylor said.

Some Nebraska women traveled to D.C. to participate in the national protest near the U.S. Capitol. Two other sister protests were held in Nebraska on Saturday, in Omaha and Loup City.

On the capitol steps, Rev. Karla Cooper and speakers from ACLU of Nebraska and Planned Parenthood of the Heartland encouraged the crowd to take action and stay engaged in local issues. Cooper wrapped up the event by leading the crowd in a rendition of "This Little Light of Mine."