With Casino Gaming Approved, Regulations and Proposals Come Next 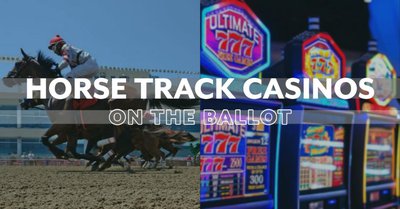 With the last of the ballots still being counted, Lynne McNally of the Horseman's Association was "thrilled, absolutely thrilled" that so many Nebraskans were ready to embrace casino gambling.

The state's horse breeders in the state got their wish.

What happens next is not entirely up to the race tracks. McNally says state government moves first.

Creating regulations for the new gaming industry could be a complicated process influencing casinos' size and the racing season's length.

Chris Kotulak, the CEO at Fonner Park in Grand Island, said he would expect the track "to maintain the same first position on the calendar that we've held since 1954." That spring season has an important place on the racing calendar, giving Fonner "an 11-week span from the end of February until the first Saturday in May."

"Our board has had preliminary discussions on the prospect of a casino being developed here at Fonner Park," Kotulak said, "and there is not any concrete opposition to it."

While planning the size of their casinos, the horse tracks and potential developers must analyze the customer base's size and gauge the impact of competition from other existing and proposed tracks.

Kotulak suggests casino management companies "won't have much confidence" investing in communities where there may be state-issued racing licenses nearby.

With six licensed race tracks in Nebraska, he believes "issuing even one or two more could have a major impact on what casino might come and what size of casino" would be considered

Two communities, including Hastings, expressed interest to state racing officials about setting up new tracks now that casinos are part of the package.

The major player establishing Nebraska casinos will likely be Lance Morgan through his company, Ho-Chunk, Incorporated. Morgan contributed millions supporting the pro-casino ballot issue. Plans are in the works for facilities in Omaha, Lincoln, and South Sioux City. Morgan told NET News, "if you can figure out what the what the market is, you can size your facility appropriately."

"Maybe it doesn't, you don't build something that looks like it belongs on the strip in Las Vegas," he said. "It's modeled on what works for a smaller community and that scale."

He anticipates modeling his facility on tracks in eleven states known as "raceinos." As the name implies, they are a combination of horse tracks and casinos. Prairie Meadows, outside of Des Moines, Iowa, is the closest facility in the region.

The horse tracks are considered a way to draw in gamblers, similar to bringing in musical acts and festivals.

"Having 30 days of racing per year (at an individual facility) is really just a built-in way to build in a crowd," Morgan said, "so we're looking at it as a real partnership where we can really feed off each other."

The state's horse breeders also hope having table games and slot machines next door to the horse track will attract new fans to pari-mutuel wagering.

The Horsemen's Association concedes the sport suffers from a generation gap and needs to convince younger gamblers to bet on the ponies.

McNally, the state association's vice president, hopes, "if they go into this facility, they're going to go check out live horse racing, see what it's about."

She's hoping once younger gamblers see the races in person, they will have "a genuine interest in those horses."

The ultimate goal is adding as many days of competitive horse racing as possible after years of decreasing time on the track to a handful of contests a year.

"Our greatest pain in life is that we are running the minimum required number of live days," McNally said. "That's 53 days (and) we would desperately love to go back to the days of old when AKSARBEN was running over 100 live days" every year.

For 90 years, the AKSARBEN race track in Omaha was the gold standard of Nebraska tracks, until shutting down in 2004. The crowds weren't there anymore.

As other tracks cut back on scheduled race days, the number of horse breeders in the state plummeted.

Getting the new "racinos" up and runner remains a couple of years away. The regulations and new permits need to be approved. In the coming months, millions of dollars will be spent at existing tracks and on behalf of those being planned.

In the end, Chris Kotulak at Fonner Park believes the profits will be a lifeline for the horse breeders.

"The windfall of casino profit that would go towards stimulating the racing industry by will regenerate the whole Nebraska thoroughbred industry and make us competitive with the nearby states."

Still looming in the background: the potential for gambling opponents, including Nebraska's Governor, to complicate the licensing and regulation of casino gaming.