A proposal to require public hearings by a state board for wind energy projects drew support and opposition at a public hearing Thursday. An independent state senator who’s running for governor sued to overturn an election law. Senators advanced legislation responding to last year’s Equifax data breach; and they heard a warning from Sen. Ernie Chambers, channeling Darth Vader.

Last year, Sen. Tom Brewer of Gordon proposed a moratorium on wind farm development in the Sandhills, but his bill went nowhere. This year, Brewer’s back with a proposal to require such developments to first get a public hearing before the state’s Power Review Board. Brewer says the requirement would restore citizens’ voice. “This bill does not stop wind energy development in Nebraska. This bill does nothing to infringe on someone’s choice to participate in a wind energy project on their land. All this bill does is to put wind energy back into a process that affords members of the public the legal standing and opportunity to be heard and have their concerns considered by an agency of the government,” Brewer said.

Tom Budler, president of BHE Wind, a subsidiary of Berkshire Hathaway, opposes the bill. Budler said Nebraska lifted such requirements two years ago, after which his company invested $600 million in the Grande Prairie wind farm near O’Neill. He said Brewer’s bill, LB1054, threatens future developments. “The uncertainty LB1054 would impose, and the fact that the committee is even considering a bill that would undo the important regulatory relief the Legislature passed previously and the governor signed just two years ago with LB824, creates a significant cloud over investing in Nebraska,” Budler said.

Vickie May, a Holt Country landowner whose house is less than a mile and a half from the one of Grand Prairie’s wind turbines, supported the proposal. May said the turbines had replaced her view of the night sky with a series of red blinking lights, and described the effect of living next to them. “Night after night of little sleep due to the noise of the turbines under certain wind condition takes a toll. A review process would give us a chance to have an input on the siting of turbines, especially when our local boards are heavily influenced by the wind companies,” May said.

Lucas Nelson of the Center for Rural affairs opposed the bill, citing economic benefits from wind developments, like payments to landowners, and tax payments. “It has the opportunity to lower those levies in counties. But it also has the opportunity to help address longstanding issues, whether it be funding local schools, whether it be funding emergency services or making road improvements, all problems that we know about in rural communities,” Nelson said.

Brewer has named the bill his priority this year, increasing the chance it will be debated by the full Legislature if it gets out of committee.

Also Thursday, Sen. Bob Krist, who says he’ll run for governor either by forming a new party or as an independent, filed a lawsuit seeking to overturn a law the Legislature passed last year. The law raised the number of petition signatures an independent candidate for governor would have to get to qualify for the ballot from about 4,000 to more than 120,000. That provision was sponsored by Sen. John Murante, chairman of the Government, Military and Veterans Affairs Committee. Krist, who switched from Republican to independent last year, says the law is just another example of the political parties making it harder for independents. Asked if he blames one party more than the other, Krist said “Sen. Murante is a Republican and is the chairman of Government. The governor is a Republican and signed the bill. So I would just say let’s just look at the blame where the blame is.”

Nebraska Republican Party Executive Director Kenny Zoeller said Krist’s lawsuit, in which he’s being represented by Dave Domina, a former Democratic candidate for Senate, represents an attempt to “contort Nebraska election law to serve his political ambitions.” And Zoeller noted Krist voted for the amendment that raised the signature requirement. 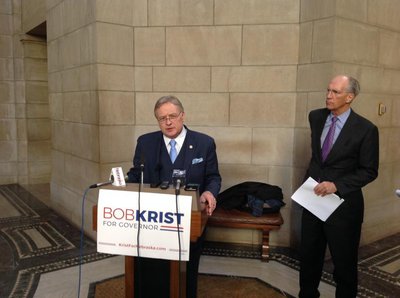 Krist said he and other senators had overlooked the provision, one of several inserted into the bill. “We make mistakes like anyone else. And I’ll assume 1/49th of the blame for not being here and fighting it. But it needs to be corrected. It is not constitutional. And I’m just happy that Mr. Domina is standing by my side on this one,” Krist said.

Even if the lawsuit does not succeed before this November’s election, Krist could still run as the candidate of a new political party, which takes only 5,400 petition signatures. He indicated he will run one way or the other.

In legislative floor debate Thursday, senators advanced a bill responding to last year’s massive Equifax data breach, in which the personal information of 145 million Americans was hacked from the credit monitoring agency. Sen. Adam Morfeld, a Democrat, said he worked with Republican Attorney General Doug Peterson on the proposal. “This legislation strikes an appropriate balance, by providing consumers access to security freezes at no charge, and allowing reporting agencies to innovate and charge for other products or bundled services,” Morfeld said.

A security freeze means credit monitoring agencies can’t release information about someone without that person’s permission. Under current Nebraska law, agencies can charge $3 for each time you request a freeze to be started, ended, or interrupted. Morfeld says “other products” agencies could still charge for include dark web searches or more extensive credit monitoring.

Sen. Paul Schumacher said the bill raises questions. “I sense big money and big issues involved here. And we talk about something with 10 minutes of debate. I’m not sure we’ve given it adequate consideration,” Schumacher said.

After 18 minutes of debate, senators voted 34-0 to advance the bill.

And, Sen. Ernie Chambers, who has been delaying other legislative action to eat up the time remaining in the session, identified a prime target Thursday. Chambers says if Gov. Pete Ricketts’ tax cut proposal makes it out of Revenue Committee to the full Legislature for debate, he will grab hold of it and not let go. Chambers launched into a Darth Vader imitation to make his point. “Brothers and sisters, I’m going to ‘Stay on the leader.’ And when that bill comes out here, I’m going to say ‘I have you now,’” Chambers intoned.

The Ricketts administration did not immediately return rhetorical fire.