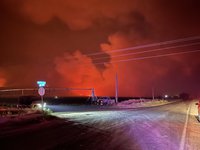 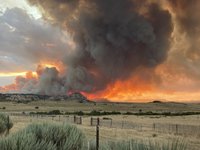 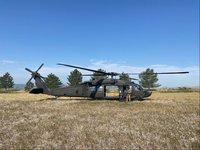 A large wildfire south of Gering, NE continues to force evacuations in the area of Carter Canyon Rd. and CR 17, and has destroyed or damaged several homes.

According to Region 22 Emergency Management Director Tim Newman, more than 35 local volunteer fire departments are on the scene and have been battling the fire since Saturday evening. County, state and federal agencies have also been assisting. The fire has been burning in the Cedar Canyon Wildlife Management area as well as Carter Canyon. Public information officer Benjamin Bohall confirmed the fire was started by a lightning storm. The fire was first reported at 6:30 pm on Saturday. Firefighters say drought conditions and 20 mph winds have helped fuel the growth of the fire.

A staging area for fighting the fire has been set up at the old Cedar Canyon School. Authorities are asking people to stay away from the area to allow firefighting crews room to battle the blaze.

According to Newman, 3 primary residences have been destroyed and 7 others damaged.

Josh Ewing told Nebraska Public Media News his parents' home and ranch in Carter Canyon were destroyed. Ewing, who lives in rural Utah, spent Saturday night and Sunday talking and texting with his parents. He told them on Saturday night to evacuate.

"My mother took off right away with a friend," Ewing said. "My dad stuck around to try to wet down the yard, wet down the house and cut some fences so the cattle could get out and wouldn't get killed in the fire. They were both able to get out safely. It was a long night for all of us, but particularly my parents. They were staying in town with a friend who lives in Gering, and didn't know if the house was going to make it or not. Then they got a message early this morning from a neighbor whose house survived but that our house didn't."

No injuries have been reported so far.

This is a developing story. Stay with Nebraska Public Media News for updates.