Why more Nebraskans are registering non-partisan, and how this impacts Nebraska politics 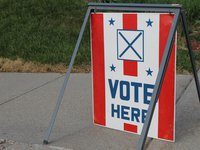 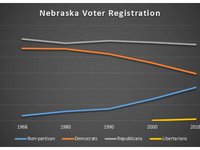 More Nebraska voters are registering as non-partisan. Fewer as Democrats. We take a deep-dive into voter registration trends.

With polls closing in less than two hours, early evening voters trickled through a basement door of First Lutheran Church in downtown Papillion. Here, like other Nebraska polling places, voter turnout was sparse for the May primary. About 24 percent.

But it took just 15 minutes for me to find four voters here willing to talk about why they’re registered as non-partisan.

“I’ve always just tried to remain neutral,” James Miranda said. “I think it just gives you more options. That’s what I like about non-partisan.”

Miranda, Roe and Stewart are among the nearly 29,000 non-partisans in Sarpy County. That’s 26 percent of registered voters and actually just 150 short of outnumbering Democrats.

It’s not just Sarpy County. Statewide, non-partisans are 21 percent of registered voters. Compare that to about 14 percent in 2000 and 6 percent in 1980. 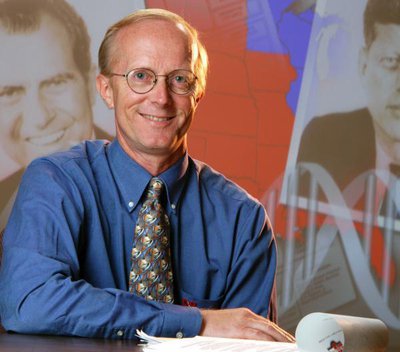 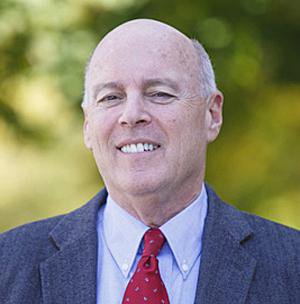 Campaign Connection 2018 is the home for NET News coverage of the 2018 elections.

“The non-partisan trend gives people an opportunity to kind of say to themselves and others, ‘I'm not that attached to parties. Parties are bad.’ People don't like parties. There's no doubt about that,” said John Hibbing, University of Nebraska-Lincoln professor of political science.

“It seems like people, as time goes on, are becoming more and more disgusted with the political parties, the traditional political parties,” said Paul Landow, University of Nebraska at Omaha assistant professor of political science. “That can be attributed to a variety of reasons but, mostly because they don't see the parties as either representing their point of view anymore or because they don't see the parties as accomplishing anything. As people grow more disgusted with the parties, they don't lose their interest in expressing their political opinion so they think that the best way to address it is to register as what we now call a non-partisan, formerly an independent. That way they can still vote, the can still make partisan choices but they don't have to do it inside the constraints of a typical political party.”

“People are just downright unhappy with the political parties,” Landow added. “They don't think that they're accomplishing anything for sure, but it goes deeper than that to the idea that the parties in some people's view are even dangerous. That they're all power grabbing groups of people who don't have the interests of the voter in mind.”

Landow said non-partisan voter growth is a national trend that he also sees this in his UNO classrooms. “A large number of my political science students are registered non-partisans and if you ask them why, the answer is almost always exactly the same. They just don't want anything to do with the political parties. They don't see the political parties as representing their interests,” he said.

“It shouldn’t be defined Republican or Democrat. It should be whatever your beliefs show,” said Savana Moore, the fourth voter I talked to in Papillion. The 18-year-old was voting for the first time during the May primary. Moore calls her family “very Republican” and “strong conservatives.” She registered non-partisan.

“My political beliefs vary, and they go kind of back and forth,” Moore said. “So that’s why I decided to go non-partisan, because then I don’t have to be a part of that party and feel like I have to vote a certain way because of a party.”

Moore added that she thinks registering as non-partisan is “becoming more and more common for people her age.”

In Nebraska, the growth of registered non-partisans has happened almost entirely at the expense of the Democratic Party. Take a look at the changes over the last 50 years.

There were 355,724 registered Democrats on June 1. That’s the lowest total since the 1972 primary. Democratic voter registration in Nebraska peaked at 396,764 for the 2004 general election. For comparison, here are total numbers of registered Democrats (from Secretary of State primary election reports) from selected years:

“I think that the country has turned more conservative and Nebraskans in particular have turned more conservative,” said Landow, who was executive director of the Nebraska Democratic Party in the mid-1990s, when that party still comprised about 40 percent of Nebraska voters. “There's less interest in the social positions that Democrats hold, generally on the part of Nebraskans.”

So what will all this mean in November? After the primary, Nebraska Democrats found positives in voter turnout numbers, touting an increase in Democrats and decline in Republicans casting ballots. Democratic Party officials say that helps them “build muscle and momentum” going into the general election.

But while it’s hard to quantify because of the way voter information is updated, it’s doesn’t appear that Democrats have seen a registration boost from protest events or the recent election. Since March 1, 2017, overall voter registration in Nebraska and numbers of Republicans, Non-Partisans and Libertarians has steadily increased, while the number of Democrats has steadily decreased. The number of Democrats actually decreased by 29 in the three weeks after the May 2018 primary. (See the chart below for a detailed breakdown of Nebraska voter registration since the start of 2016.)

Hibbing believes non-partisan voters still retain a tendency to consistently vote for one party or another. “A lot of people who are non-partisan continue to vote in a very partisan fashion,” he said. “I think it's worse for the Democratic Party than it looks in a way because I think most of those non-partisan identifiers, especially those who are moving there now, are actually very prone to vote for the Republican Party. This is why we haven't had a Democrat win a state-wide race in Nebraska for a quarter of a century, except for Ben Nelson, who was barely a Democrat.”

“Traditionally, when people have moved to the cities, we tend to see greater attachment to the Democratic Party,” Hibbing added. “Well over half the population of Nebraska lives in three counties right now, and they're all urban counties, not surprisingly, Sarpy, Douglas and Lancaster. So you could have had the expectation that this would have been a good thing for the Democratic Party. But I think, as people have moved from the small towns and rural areas of Nebraska to Omaha and Lincoln, they've kept their political ideology, and certainly have not engaged in any kind of liberalizing tendencies.”

What happens in November, and likely in future elections, will increasing hinge on the growing influence of non-partisan voters like Savana Moore.

“So I just feel like it gives me more freedoms, rather than like segregating yourself from a group of people,” she said, shortly after voting for the first time this May.

* The overall decline in registration here, which impacted all categories, can be attributed to a periodic registration "clean-up" of names of voters who have died, moved or are otherwise not eligible to vote in Nebraska, according to the Secretary of State's office.