While new safety efforts are underway, injuries are still part of the job for meat and poultry workers

Meat and poultry workers are injured at a higher rate than others in manufacturing. Federal regulators and meat companies agree more must be done to make slaughterhouses safer. There are signs the industry is making progress, but danger remains.

The meatpacking plants that enable American consumers to find cheap hamburger and chicken wings in the grocery store are among the most dangerous places to work in the country.

The rate of meatpacking workers who lose time or change jobs because they’re injured is 70 percent higher than the average for manufacturing workers overall, according to the Bureau of Labor Statistics.

A Harvest Public Media public records request found from January 2015 through February 2016, 145 serious accidents were reported in the factories run by the country’s four top meat companies – Tyson Foods, JBS USA, Cargill and Smithfield Foods and their affiliated companies. The reports reveal a gruesome scene. They describe, for instance:

“Unfortunately this industry continues to experience amputations, hospitalizations,” says Jeff Funke, director of the Omaha office of the federal Occupational Safety and Health Administration (OSHA). “This is an industry that needs some work.”

Regulators have plans to get a grip on the problem. OSHA launched a special enforcement program this year in Nebraska’s meat processing industry and at poultry plants in the Midwest and Southeast, even Texas and Oklahoma.

This chart prepared by the Government Accountability Office (GAO) shows the rate of injuries and illnesses in meatpacking remains higher than the rate for manufacturing overall. The GAO also reports that injuries in meatpacking are undoubtedly underreported. (Image courtesy GAO) 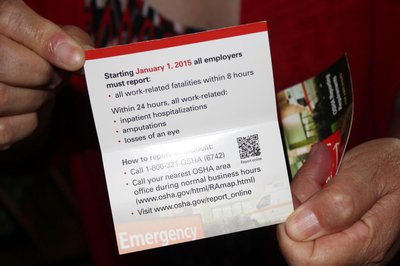 In 2015, federal regulators began requiring injuries to be reported within 24 hours. Nebraska Appleseed, a worker advocacy group, handed out these pamphlets to inform workers of the new rule. (Photo by Peggy Lowe, Harvest Public Media)

While the enforcement program is in effect, regulators in these areas have the power to inspect meatpacking plants without warning. That could mean an increase in the number of fines for safety violations, although Funke says the idea is to convince companies to raise their own standards.

OSHA is also trying to learn more about injuries as they happen. The agency set a rule into effect in 2015 that requires companies to report serious injuries within 24 hours.

This rule change is what enabled Harvest Public Media’s public records request. In the past, companies may have recorded these incidents but never had to tell OSHA about them, so they weren’t part of the public record. Companies would record the injuries on their official log, but OSHA would only see the log if the agency held an inspection, which OSHA only conducts at a fraction of workplaces in a given year.

“I don’t want to suggest that they were shooting in the dark, but I mean, it was a very dim light that allowed them to see what was going on in workplaces,” says Celeste Monforton, a researcher at George Washington University and former U.S. Department of Labor official who has also been gathering these reports.

Monforton explains the official injury statistics published by the Bureau of Labor Statistics aren’t based on hard numbers, but are extrapolations based on samples from the logs OSHA does see in a year’s time.

“Now [regulators will] know where they’re occurring, the pieces of equipment involved, the shifts that they’re occurring on,” Monforton says. “It’s really going to help OSHA not just potentially doing an inspection at that plant but also analyzing that information and being able to provide data back to the industry.”

The industry itself says injuries are a cost companies don’t need and injury rates are, in fact, going down.

“We are by no means all the way to perfect or all the way to bright, but we’ve made some pretty good strides,” says Dan McCausland, safety director at the North American Meat Institute, a meat and poultry industry trade group.

While new safety efforts are underway, injuries are still part of the job for meat and poultry workers

Official injury statistics do show a decline in injury rates. Meat processing is drastically safer than it was 20 years ago.

“That’s almost all done automatically or semi-automatically, so the difficulties associated with those jobs are gone,” McCausland says.

For example, a study by NIOSH, the occupational safety arm of the Centers for Disease Control and Prevention, found that 64 workers in a single year at a Maryland poultry plant showed severe enough symptoms to be diagnosed with carpal tunnel syndrome. Workers reported receiving care at the plant clinic and with their own doctors, but just four cases of carpal tunnel were recorded at that location from 2010-2013.

Some companies appear to be trying harder to police themselves. Last year Tyson Foods, one of those big four meat companies in the U.S., announced new safety projects around the country and a new vice president whose job is safety.

The worker advocacy group, Oxfam America, applauds the programs, which may be a surprise from a group that reported poultry workers sometimes wear adult diapers as they work because they are not being granted mandatory bathroom breaks.

Advocates say public commitments to safety help hold companies accountable, but they would like to hear more details. They are concerned well-meaning policies won’t make it from the top of the corporate ladder down to the factory line.

“There is a significant gap between the publicly stated policies that these companies have developed, have put out, and the way that those policies are being implemented,” says Oliver Gottfried of Oxfam America.

On its website, Tyson says it will adjust ergonomics, require injury reports and conduct more safety training. The company recently announced it will hire a company to audit the safety programs. A request by Harvest Public Media to interview the company’s safety executive, however, was never granted.

Vega Brown says at each company she worked for there was a lot of pressure to work fast and move more meat out the door. The pressure to produce compelled supervisors to work around safety rules and inspections, she says. When an inspector was on-site, everyone would follow the rules. 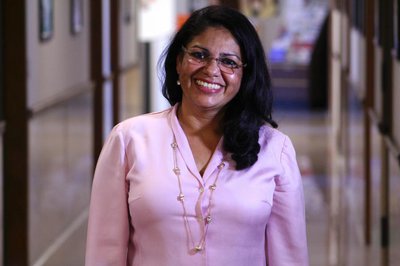 “The floors are completely clean, there’s no meat or anything,” Vega Brown says. “I can go on my break, take my time. But that’s only when the inspector is there.”

After inspectors left, she says supervisors weren’t so strict. If a worker forgot to bring earplugs or misplaced their safety glasses, they were told to keep working.

Keeping guards and locks in place are basic safety measures. Safety guards keep fingers and limbs from falling into dangerous contact with saws and rollers. Safety locks keep machines powered off so they don’t turn on inadvertently.

Vega Brown quit her last meatpacking job after she had surgery for carpal tunnel syndrome. A couple of days after the surgery she was still in pain, but says she was rushed back to work. She left, but her wrist and shoulder still hurt too much to find another job.

Other people are working through injuries to keep their meatpacking jobs and fill the coolers at the supermarket, Vega Brown says.

“I think of the people who are there day after day,” Vega Brown says. “People who couldn’t move their arms that day but made the effort and made a great product.”