Tim Hobbs (center), a member of the Midwest Rugby Rebels team, reaches for the ball during a practice scrimmage at the Paralyzed Veterans of America - Great Plains Chapter. (All photos by Joy Carey, NET News)
Since they both have limited use of their hands, Robert Rieck (right) helps his teammate Jessie Garner with her sweatshirt using his teeth.
Katie Dyas (left) and Jena Munson (right) help Jessie Garner into her rugby chair.
Robert Rieck prepares for practice, taping on his gloves.
Jessie Garner (left) and Taylor Graham talk on the court while waiting for practice.
Ethan Eckelbarger (center) calls out directions to his teammates during a play.
Tim Hobbs (left) looks for an opportunity to pass the ball as Taylor Graham defends.
Jon Schuetz wheels across the court after scooping up the ball.
Ethan Eckelbarger (center) attempts to block a pass by Taylor Graham.
Jessie Garner jokes with the team during a short break.
Ethan Eckelbarger (center), turns to block another player.
Some members of the Midwest Rugby Rebels pose for a team photo. Clockwise from left: Jessie Garner, Ethan Eckelbarger, Taylor Graham, Jon Schuetz, Tim Hobbs, Robert Rieck. 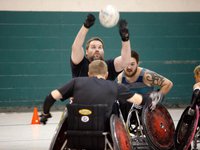 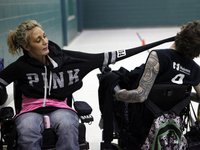 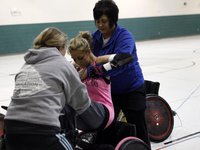 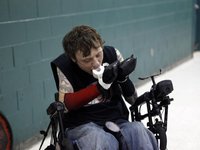 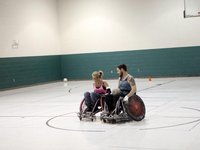 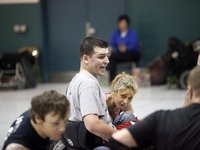 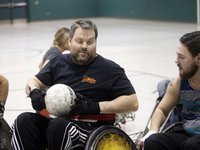 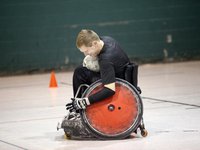 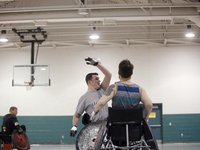 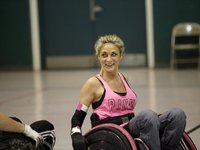 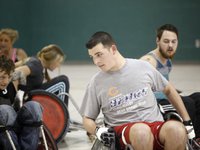 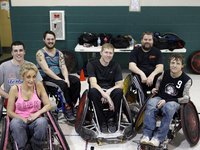 The word ‘quadriplegic’ is rarely associated with exercise. But for members of the Midwest Rugby Rebels in Nebraska, wheelchair quad rugby provides both a competitive workout and a supportive community.

It’s a Thursday evening in Omaha, chilly and overcast outside. Inside a gym on the north side of town, the competition is about to heat up as about ten people gather for a rugby game. One of them is 21-year-old Taylor Graham. In 2013, Graham was in a motorcycle accident in Lincoln that broke his neck and dramatically changed his life. And, like the rest of the rugby players in the gym tonight, Graham is in a wheelchair.

“I’m actually pretty blessed, I’ve got a C-6 injury which is about Adam’s apple level,” Graham said. “I was just happy to be alive and I knew that there was still going to be plenty of opportunities for me out in the world and I knew life wasn’t over.” 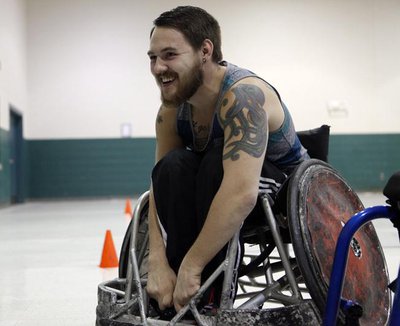 Taylor Graham gets ready for a routine practice at the Paralyzed Veterans of America - Great Plains Chapter. (Photo by Joy Carey, NET News)

One of those opportunities was quad rugby. Many members of the Midwest Rugby Rebel team, like Graham, are incomplete quadriplegics. That means their functionality and sensation are affected in all four limbs, but they’re not completely paralyzed.

“I actually got started playing tennis post-accident, down in Lincoln,” Graham said. “I’ve had guys coming after me to play quad rugby for both of those two years since the accident. I kind of sloughed it off because I loved tennis so much, but I finally came and got involved and fell in love with this too.”

As long as there’s no contact between players, quad rugby rules say you can ram an opponent’s wheelchair as much as you want. Playing on a basketball court, the object of the game is to carry a volleyball across the opposing goal line. It’s an aggressive sport, but Graham says the players like it that way.

“When I came to rugby, I didn’t really think I had the aggression in me that I needed to get out, but it just kind of brings it out of you,” Graham said. “That competitive nature comes out, and you really just give it your all and try your hardest.”

There are more than 40 competitive quad rugby teams in the U.S. The Midwest Rugby Rebels travel when they can to compete, and recently hosted a scrimmage against a Kansas City team.

In between competitions, they meet once a week to practice. Assistants help the team get ready, which takes about an hour. Players and volunteers air up the tires of the wheelchairs, tape gloves on the players, and get out the glue they rub on gloves and wheels for grip. A few players have to be lifted out of their everyday wheelchairs into the rugby-style ones. 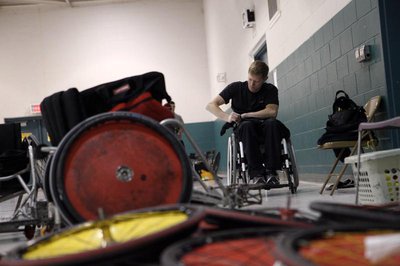 For several members of the team, quad rugby is more than just a way to have fun. It’s a way to regain confidence and athleticism they lost after becoming disabled. Graham’s teammate Jon Schuetz became paralyzed from the chest down after a motorcycle accident.

“I was a runner and basketball player before I got injured,” Schuetz said. “The first thing you realize is the physical things you’ve lost, but there’s a lot of emotional stuff that goes on with it too. So I think finding rugby and helping me get back to that competitive edge is a really cool thing.”

Another member of the Rugby Rebels, Ethan Eckelbarger says finding the team helped him survive his injury, which happened when he attempted suicide in 2009. He was 18 years old at the time, struggling with depression, family problems, drugs and alcohol.

“The more I used drugs and alcohol the worse it got,” Eckelbarger said. “When that stops working, you think that’s it.”

Eckelbarger tried to end his life by shooting himself, but instead of killing him the bullet lodged in his spine. Right away, he knew it hadn’t worked like he wanted.

“I was awake. I was just laying there, and it literally started raining. I just kept yelling call the cops,” Eckelbarger said. “It was like four to five hours later, I knew I was going to be dead, and I heard a door shut and I just screamed all I could. Finally, next thing I hear ambulances and fire trucks miles away and I knew then I was going to be good, you know?” 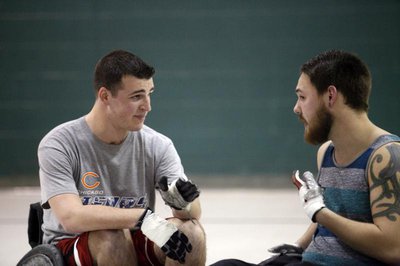 Taylor Graham (right) chats with Ethan Eckelbarger in the middle of the court during a break. (Photo by Joy Carey, NET News)

Initially, Eckelbarger was told he would never walk or breathe on his own again. By the time he left rehab he was doing both, but the bullet remains in his spine, causing him constant pain and some loss of function.

“I didn’t want to live at first you know?” Eckelbarger said. “I thought it was bad before and now it’s ten times worse, but you kind of have to suck it up and do something.”

‘Doing something’ for Eckelbarger turned out to be quad rugby.

“My dad started calling people ‘cause he was tired of me laying in bed every day,” Eckelbarger said. “Finally we showed up, first practice just like Taylor, you do it one time and you don’t stop. That’s what you look forward to every week.”

“Five, six years I’ve been playing now and I love it,” Eckelbarger said. “That’s what I look forward to every year. It’s so much fun! You know, I’m glad I got hurt just for the sport. I never would have got to experience this.”

Both Graham and Eckelbarger encourage newcomers to try the sport. Some paraplegics and even able-bodied players practice with the team, but only quadriplegics compete in matches.

Jena Munson is a recreation therapist at Immanuel Rehabilitation Institute. She regularly helps with the team.

“It’s just a great opportunity for them to have some exercise outlets and have that opportunity to be around others who are in similar situations,” Munson said.

If you would like to get involved with the Rugby Rebels, contact Jena Munson at 402-572-2276 or jena.munson@alegent.org.

The team is sponsored by the Paralympic Sports Club, which is made up of the Eastern Nebraska Wheelchair Athletic Association, Immanuel Rehab Institute and the Great Plains Paralyzed Veterans of America.

“They might not think of people in wheelchairs getting back out in the community or playing sports like that, so it’s a pretty cool opportunity for people to come out and experience something like that. See what we do, how hard we push ourselves and train.”

Despite his injury, by pushing himself Graham has found there’s not much he can’t do.