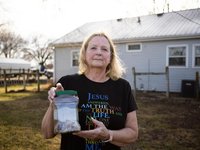 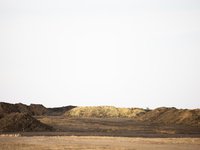 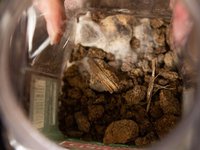 Residents and scientists in Mead, Nebraska, say more testing and research is needed to understand potential health and environmental risks posed by the AltEn ethanol plant. The state is suing the company for years of environmental violations, mostly stemming from its use of seed corn coated with pesticides. The facility was ordered to close in February after improperly handling solid and liquid toxic waste leftover from that process.

At this point, little is known about the wider impacts the company’s actions may have on the environment and community. While some residents are seeking well testing to rule out contamination to their drinking water, researchers at the University of Nebraska say they’re planning to launch a multi-faceted research effort into the scope of the pollution.

Jody Weible moved to the eastern Nebraska village of Mead in 1986, and for most of that time, has drunk the water from her tap without thinking twice. She owns a charcoal filter in her home, which she’s long trusted to filter out contaminants.

“The older you get, the more water they tell you to drink. Like an ounce for every year you are,” Weible said. “That's not going to happen. But I drink a lot of water.”

Not anymore. She lives a mile from the AltEn ethanol plant, and in recent years, has started to question if the company’s presence in the community threatens her drinking water. The plant started making ethanol out of treated seed corn, which is coated in pesticides and fungicides after opening in 2015. Since then, the complaints — and concerns — have mounted.

“Someone has reached out to me and said I need to get my water tested because we could be contaminated from that,” Weible said. 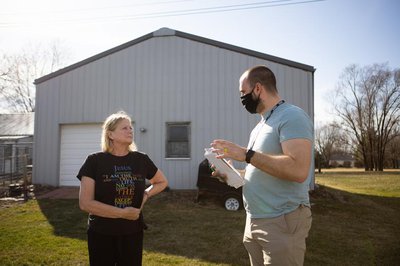 Much of the controversy stems from the plant storing tens of thousands of pounds of byproduct waste on its property without a permit to do so. The lawsuit filed by the state against the company notes that as of February 1, the company was storing upwards of 84,000 tons of contaminated distillers grain on its property that was leftover from the ethanol production process.

Residents say the grain piles have created an unbearable smell that wafts through the community, but they’re also worried the chemicals coating the seed corn have ended up in the area’s air, soil, and water.

In a 97-page lawsuit filed by the state in early March, regulators outlined similar concerns with 18 causes of action against the company. Those include causing pollution to land and waters of the state in two main ways: allowing contaminated distillers grain to sit directly on the ground thus risking leaching and runoff, and dumping its liquid toxic waste, which contained elevated levels of agricultural chemicals, onto nearby properties.

With pesticide testing normally around $400, residents like Weible are taking up the state’s offer to test their wells. The Nebraska Department of Health and Human Services sampled two hydrants on Weible’s property and tap water from her kitchen sink. Results are expected back any day.

The Nebraska Department of Environment and Energy recently tested six of the area’s public wells: two at the nearby Nebraska National Guard Readiness Center, two at the University of Nebraska-Lincoln’s Eastern Research Center, and two belonging to the village of Mead. Contaminants weren’t detected. 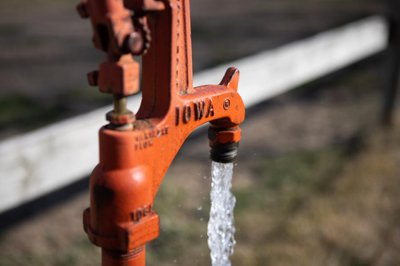 After numerous environmental violations at the AltEn ethanol plant, the Nebraska Department of Health and Human Services has been sampling residents’ water free-of-charge. Testing for pesticides normally costs around $400. (Photo by Gabriella Parsons, NET Labs)

Whether chemicals from the plant have made their way through some local creeks — and could one day end up in the Platte River — is another question. That concern looms even larger after a recent waste spill at the plant.

Days after the plant closed, a pipe connected to one of its 4 million gallon waste tanks split open in the middle of the night. Thousands of gallons per minute of inky black pesticides, fungicides, and manure spewed about five miles across the snow.

Sheldon Brummel, a masters student with the University of Nebraska-Lincoln’s Bee Lab, discovered the spill by accident while chopping wood for beehives. He and colleagues raced to block the flow at a culvert near the University’s nearby research property, but says at the time, AltEn was nowhere to be seen.

“We dragged a tarp … and then a couple bales of corn, essentially, and tried to block it,” Brummel said. “Keep in mind it was like, negative 10 degrees and snowing.”

NET reached out to AltEn several times via email and phone for comment on their response to the spill, but those requests were not returned.

A month later, on a foggy morning in Mead, Brummel is back at the scene of the makeshift dam to test the water with Dr. Judy-Wu Smart, who runs the UNL Bee Lab. Ahead of a recent rainstorm, NDEE allowed AltEn to unblock the creek to avoid flooding. The creek’s water runs brown and reeks of the now infamous scent of Mead, a rotten smelling mixture of manure, chemicals, and fermented grain.

Wu-Smart recalls seeing stormwater from the plant flowing through this spot. She says that warrants yet another round of sampling for her team. 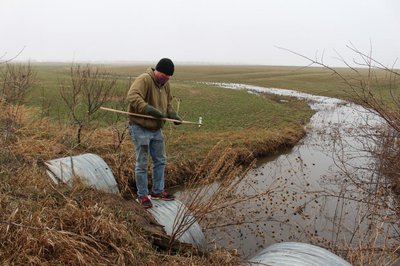 Sheldon Brummel, a masters student and researcher at the University of Nebraska-Lincoln Bee Lab, takes samples from a culvert northeast of the AltEn ethanol plant on March 17, 2021. Researchers at the University of Nebraska-Lincoln Eastern Research Center, which sits 4 miles from AltEn, have been following the disaster closely and monitoring for environmental contaminants. (Photo by Christina Stella, NET News)

“Every time we come out here, we're facing uphill battles to document and to try to figure out the extent of the ongoing contamination issues,” Wu-Smart said. “We're here to try to understand the past ones and we keep uncovering new ones, which is really frustrating.”

Brummel starts taping garbage bags to his legs. He’s preparing to lower himself above the water, which he samples with a plastic cup fitted inside a yardstick. EPA sampling of spill waste recovered from the makeshift UNL dam built at the culvert showed 12 different chemicals.

For years, Wu-Smart’s team has been trying to figure out why their bees were dying. But Brummel says this kind of monitoring was never their job.

After spending $65,000 on research, testing, and new bees, they suspect the die-offs are due to agricultural chemicals often found on treated seed corn, and that the compounds have already damaged some local birds, bugs, plants, and more. But it’s not clear exactly where the pollution hotspots are.

“Is it in the water, is it the soil, air? If it's the vegetation, where we know that there's high levels of chemicals found in our pollen and our hives, now our next steps [are] to identify what species of plant and where on the landscape they are,” she said.

NDEE already conceded in their documentation of the spill that "the level of pesticides found in the samples indicates that the spill poses a risk to human health and the environment."

The process is akin to looking for several needles in different haystacks. Plus, with many different fungicides and pesticides in the mix, Wu-Smart says not much is known about what happens when they are combined together and released onto a landscape.

Research has shown some chemicals found on treated seed corn can cause immune system problems, neurological damage, and yes, die-offs in certain animals. But those impacts occur at different levels in different species. That adds yet another layer of uncertainty.

“Here we have a chemical mixture, lots of fungicides, neonicotinoids, other agricultural herbicides and insecticides at lower levels, but if you have these chemicals that enhance toxicity, we don't really know the impact of those mixtures,” Wu-Smart remarked. “Our regulation is all based on individual chemical benchmarks. We're not looking at it as a chemical mixture.” 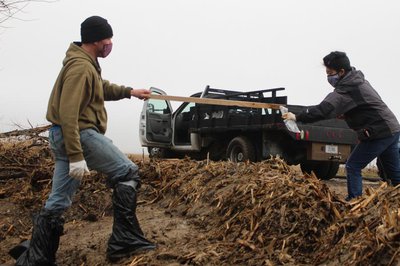 That’s partly why Wu-Smart says her team’s work is a drop in the bucket compared to what’s needed to fully understand where the chemicals are ending up and how that’s impacting local wildlife. In her view, environmental testing needs to happen regularly, especially after weather events that could change the concentration and location of chemicals in waterways.

“I think the biggest problem here that this case has highlighted, is that there's no regulatory power division to help us understand or deal with impact exposures from systemic pesticide pollution,” Wu-Smart said.

Eleanor Rogan, chair of the University of Nebraska Medical Center’s Department of Environmental, Agricultural & Occupational Health will lead a team of University researchers as they try to put the pieces together.

“The reality is, we have very little data at this point,” said Eleanor Rogan, chair of the University of Nebraska Medical Center’s Department of Environmental, Agricultural & Occupational Health.

A interdisciplinary collaboration of University scientists will look into the possible impacts of the contamination on local water quality, wildlife, and the community. Rogan agrees with Wu-Smart that ongoing conditions, including rainfall in the area, pose new questions to experts: the rain probably pushed any chemicals that are already in local waterways farther downstream.

“It also then expands the area where, for example, wildlife could track around in that. And we don't know what the hazards are, if there’s a hazard there. But it certainly expands the area into this surrounding countryside,” Rogan said.

That’s partly why Dr. Judy Wu-Smart believes federal agencies need to be brought into the fold of monitoring the area’s air, soil, and water. She says the EPA can help address where possible contamination hotspots are by providing more resources and manpower to testing efforts. 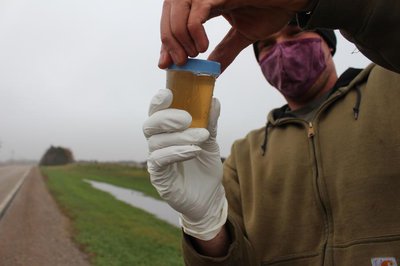 The UNL Bee Lab sampled a large puddle in front of the AltEn ethanol plant on March 17, 2021. Days before, a berm built near piles of treated seed corn waste overflowed, causing stormwater runoff to pool by County Road 10 in Mead. (Photo by Christina Stella, NET News)

“In addition to EPA, I think we also need the assistance of Fish and Wildlife to help us understand the downstream impacts on fish, on birds, on mammals,” said Wu-Smart. She says she’s hit walls trying to get that help herself.

“We've reached out to Fish and Wildlife Services to see if they can assist, but because the state hasn't requested assistance — federal assistance — their hands are tied.”

NET asked NDEE and Governor Ricketts’ office if the state has requested that assistance. Representatives declined to comment, citing the pending lawsuit between the state and the company.

Looking out onto a field where migratory birds are drinking from a creek, Wu-Smart says research into environmental impacts can’t wait.

“We focus on insects, invertebrates. That's a hugely different system than mammals and birds and aquatic organisms … We need experts in those areas to help put eyes and ears on the system and try to help put input and feedback on where those research priorities need to be,” she said.

Wu-Smart recently received some funding from Project Apis m. to continue her research. But given the complex questions raised by AltEn’s actions, Brummel adds it’s going to take months — and a lot more resources — to know how to respond. Time is of the essence.

Editor’s note: We changed two lines in a previously published version of this story to clarify that Dr. Wu-Smart and her team suspect, but can not conclude at this time, that their bee die-offs are a result of pesticide pollution.

Students Across Nebraska Are Learning to Spot Unsafe Drinking Water
Barge Industry May Be a Mixed Bag for the Green Energy Movement
Fifty Years In, Oklahoma-Based River Corridor Faces Millions in Backlogged Repairs