Farming in the fertile Midwest is tied to an environmental disaster in the Gulf of Mexico. But scientists are studying new ways to lessen the environmental impact of nitrogen and phosphorous pollution from Corn Belt farms and improve water quality.

The National Oceanic and Atmospheric Administration (NOAA) forecasts the so-called “dead zone,” an area of sea without enough oxygen to support most marine life, to grow larger than the size of Connecticut, or roughly 6,000 square miles.

“This dead zone forms because nitrogen (and) phosphorous pollution is flowing from agricultural fields – because they use it as fertilizer,” says Matt Rota, senior policy director for the environmental group Gulf Restoration Network. “(The pollution is) flowing from sewage treatment plants, from concentrated animal feeding operations, from industrial sources, and flows down the Mississippi River.”

The Mississippi then dumps massive amounts of nitrogen and phosphorus into the Gulf, which feeds algal blooms. When the algae die and drift to the bottom, oxygen is sucked out of the water, creating a massive area inhospitable to seafood. It’s a condition called hypoxia.

Watching Our Water: Harvest Public Media examines water quality issues in the Great Plains and Midwest and how they connect to the region’s largest industry: agriculture.

Watch: Watching Our Water: The Challenge to Keep it Clean

Federal officials had planned to reduce the size of the dead zone to about a third of its estimated size by 2015. But in the face of a growing problem, and without much progress in reducing the hypoxic zone, they recently kicked that can down the road another 20 years to 2035.

Upstream farmers can’t just stop using fertilizer and pesticides altogether without massive changes in our food system. So, what can they do? Researchers are looking at two plant-based strategies to help mitigate the dead zone.

Waterway to the buffer zone

“If you have a buffer system, that will help reduce all of the nitrogen and sediment losses,” says Ranjith Udawatta, an associate professor of Soil, Environmental and Atmospheric Sciences at the University of Missouri.

Udawatta is trying to coax farmers to add four lines of vegetation to separate farmland from streams.

“Next to the stream, we’ll have a fast growing tree species that can tolerate water,” he says. “Then next to that is slow growing, high value trees, then shrubs and grasses.”

Imagine a new mini-ecosystem lining streams and rivers in the Corn Belt: cottonwood trees closest to the water, black walnut next, then elderberry bushes and finally perennial grasses that nestle up to the corn fields. These plants can hold nitrogen in their roots, and prevent runoff from entering waterways.

Ultimately, Udawatta says, no farmer wants to contribute to pollution.

HARVEST VIDEO: Pure, pristine, and tested - When snow melts on the eastern side of the continental divide in the Rocky Mountains, it is clean enough to drink. But very quickly, that water will need to be used by nearly 1.5 million people in the Denver Metro area. Watch what happens as water is tested and used and put back in the South Platte River to serve agriculture needs to the east.

“They like the idea,” he says. “They know the benefits. Everybody knows the benefits of buffers: water quality, soil quality, wildlife. Everything.”

To work, though, he hopes to show through his research that it’s economically feasible for farmers to add the extra rows of vegetation by selling the trees for lumber or the grass for biofuel.

The second strategy to shrink the dead zone lies in restoring the river floodplains to wetlands.

The Overton Bottoms Conservation Area in central Missouri used to contain farmland. It’s right next to a bend in the Missouri River. Indeed, some of the most productive agricultural land is located along a big river on the floodplain, says hydrologist Robb Jacobson with the U.S. Geological Survey (USGS).

Producers raise crops in the fertile soil of floodplains and often add fertilizers and pesticides. But every now and then, the fields flood. 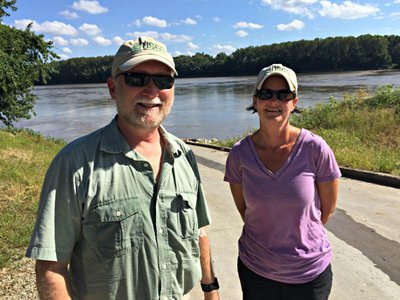 Hydrologist Robb Jacobson and geologist Carrie Elliott, both with the U.S. Geological Survey, monitor the farm runoff and water quality in the Missouri River, from Montana to its confluence with the Mississippi River near St. Louis. (Photo by Kristofor Husted, Harvest Public Media)

That’s where reestablishing wetlands in the floodplains can help.

“There’s a hope that some of that flooding of these floodplain wetlands would reduce nitrogen loads,” he says.

The native plants in the wetlands, like the riparian buffer, can act as a filter for nitrogen flushing down the river during floods, which climate scientists predict will become more severe as the planet warms.

Since a 1993 flood of the Overton area, conservation officials have been moving the levees back and returning the floodplain to its original form as a wetland habitat.

But while Jacobson says wetlands like those in Overton can help denitrify the water, it can only do a fraction of the nutrient filtering that needs to be done to restore the health of the dead zone.

“What we see here at Overton in these conservation lands would have to be replicated through most of the river valley to have an effect on the amount of nitrogen in the system now,” he says.

Until then, Jacobson says he hopes more federal programs and conservation efforts can provide incentive to farmers and landowners upstream on the river to protect the water downstream in the gulf.

This report is part of “Watching Our Water,” a special series from Harvest Public Media. Click here to see more.