Can lawyers save the day when the nations of earth fight over who should control the atmosphere on Mars?

We better hope so! And it may be lawyers trained in Nebraska who make peace in the solar system. 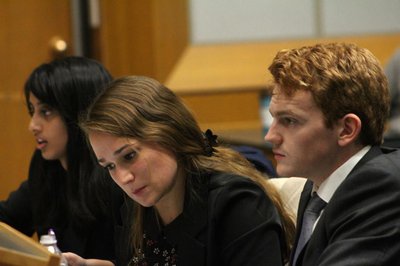 Team Neapilia: Nidhi Venkatesan (L), Shannon LaFontaine and Angas van Balen from of the University of Adelaide in Australia. 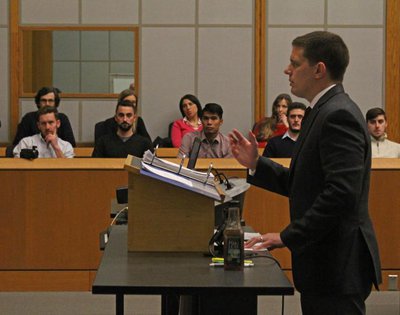 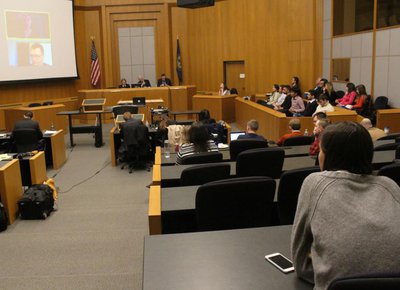 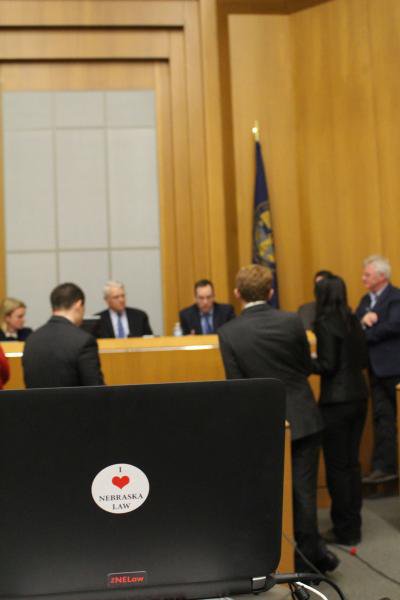 The scenario provided the space law moot court competitors reads like a pretty good outline for a sci-fi movie. Here's the narrative and a timeline for the fictional events that proceeded their day in court.

This year students from the University of Nebraska College of Law will compete in a moot court competition designed to test their courtroom skills and knowledge of legal case law and theories. It’s like a debate team using court cases.

Most law school specialties have these sorts of hypothetical problem-solving contests. In space law, many cases take on narratives that rival a pitch for a new Netflix series.

Earth is falling apart; over-populated and natural resources are scarce.

Hoping to survive, the Democratic Republic of Neapilia wants to colonize Mars. Because the atmosphere won’t support human life, their scientists developed a satellite system which can change the climate so people can move in. Imagine! Giant mirrors directing heated rays at Mars to melt its polar ice caps. What’s not to like?

The Republic of Kalvion is not a fan.

The nation has a robotic mining operation on Mars, and the whole climate change scheme would screw up its plans. They launch a cyberattack on the satellite orbiting mars, interfering with the OptronRay control system.

One thing that has not changed in the future? Lawsuits.

Now, teams of attorneys representing the two nations face off before a three-judge panel of the International Court of Justice (an actual judicial body administered by the United Nations and headquartered at The Hague, Netherlands).

The case unfolded on the Lincoln campus of the law college in a courtroom/classroom used for students to hone their trial skills.

This practice prepares the adversaries for regional competitions. Winning teams may earn a place in the World Finals to be held this fall in Germany. The Manfred Lachs Space Law Moot Court Competition prepares the case study used by competing teams from all over the world.

In this rehearsal, the Nebraska team got a taste of the global nature of the contest, coming up against the moot court team visiting from Australia’s University of Adelaide Law School.

A retired attorney who has specialized in space law since 1978 leads the three-judge panel evaluating the merits of the opposing parties. Dennis Burnett graduated from the University of Nebraska College of Law before establishing his practice in Fairfax County, Virginia. He specialized in commercial applications of space travel including launch contracts and satellite purchase agreements.

For each year’s competition, scholars in the field of space law, selected by the International Institute of Space Law, are assigned to write a convincing fictional case. They created the history behind the conflict between Neapilia and Kalvion. A good case provides multiple challenges and learning opportunities to the student competitors.

“It is a very complicated problem,” Burnett said in conversation outside the courtroom.

While the scenario is fiction, there is no fabricated case law used by the students advocating on behalf of their clients. Much of the case law involves earthly international agreements on the rules of engagement in conflict, trade and air space.

As competition got underway the Australian team, representing Neapilia, referenced Article 6 of the Outer Space Treaty and the Moon Agreement. Both are very real resolutions advanced by the United Nations, albeit rarely used.

“The Moon Agreement is not adhered to by the United States, Russia or China,” Burnett said. “It’s pretty much disregarded by everybody other than a few nations that signed it.” In reality, he adds, it will likely never be used to govern the lunar surface.

The challenge, explained Burnett, is for the law students to seek out existing case law and to speculate and understand how those legal principles might apply to events that might unfold in the future.

“We have five basic space treaties but we also have other treaties that apply and other international law cases that go back hundreds of years and the law students have got to go back and know essentially all of them.”

As arguments play out in this courtroom, it is clear there are parallels to the real world of 2018.

In place of the hacking underway between rival nations today, the fiction of this case plays out in orbit around Mars.

“Kalvion’s actions constituted an unlawful cyberattack against Neapilia,” argued Angas van Belen of the University of Adelaide. Such an act, he told the judges, was “contrary to international law and to the peaceful uses of outer space.”

His client’s attempt to alter the Martian climate wasn’t a reckless scheme, in van Belan’s case. He reassured the court, “the state of Neapilia has strived to contribute to the benefit of mankind through its space exploration and the implementation of its ‘Fifty-Rays Program,’” the scheme employing solar mirrors on a satellite to melt the ice caps on Mars to induce climate change.

It may sound far-fetched, but for students finding ways to apply the law to justify or challenge that scenario, the challenge is invigorating.

“There’s a lot about space we don’t know,” said Nidhi Venkatesan, lead researcher for the Adelaide team. “A lot of it is unexplored and a lot of it we’re still searching and trying to figure out, so we need set rules in how we do it.”

As session judge Burnett put it, “it is part of the building of their future.”

Representing the people of Kalvion was Aaron Kirk, completing his law degree at Nebraska. He is also a major in the United States Air Force. Via computer-video feed (which would have seemed equally futuristic just a few years ago) Kirk was joined by his law school co-counsels, Lyndsay Hurilla and Nate Woodford.

“I would equate it with being the legal equivalent of a cowboy,” he said following his day in court. “You are out there in the west and you are trying to make things work and trying to think about how it does.”

For Kirk, setting the case in the future does not change his frame of mind as a lawyer.

“When I am up there arguing, I am not really thinking to myself that this is 2060 or whatever and I have moon boots on. I’m really focused on the law and how the facts are presented.”

Kirk has found space law to be unique because of the way it must look forward.

“When you are dealing with law on the cusp of what is new, it’s fascinating,” Kirk said. “The law, whenever it encounters technology, these things often times require a lot of research, a lot of thought.”

That was certainly the case in his defense of Kalvion, the nation that took it upon itself to all but knock out the Neapilian satellite orbiting Mars.

There was sharp questioning by the judges during Kirk’s time at the podium.

“Agent, you are admitting you are responsible for the cyberattack under Article Six?” Judge Matt Schaefer asked pointedly.

“Absolutely,” came Kirk’s quick reply. “Because it was lawful and in fact, I would even argue we had an obligation to do it.”

This was at the heart of the case and revealed how a speculative scenario easily meshed with current events. What would justify one nation’s attack on another country’s technology? Did messing with a satellite’s circuit board equal an act of war?

“No it wasn’t. The U.N. Security Council has not determined this to be an act of aggression in any sense of the word. Aggression is equated to armed force.”

Burnett would add later, in our real world “military officials would say some of these issues are not resolved and we need them resolved” and a new generation of space law students will be the one’s crafting these treaties and regulations.

“These are areas of law that are crystalizing as we speak,” Venkatesan added. “Cyber operations are really at the forefront of a lot of nation’s thinking, and putting it in space just makes it all that much more interesting.”

At the end of the practice round, opposing team members in the room appeared visibly relieved. Signs of nervousness found their way past their professional cool during the hour-long session.

In this trial the panel of judges offer no verdict on the merits of the case, only advice for opposing legal teams.

From the bench, Burnett reassured them “this is a practice round (and) understandably, it’s going to be rough. That’s okay. It’s a great start.”

He and the other two judges went on to offer suggestions on both stage presence and case preparation.

Burnett said this is a specialty legal career destined to grow, meaning it’s a great profession for ambitious graduates.

He notes news coverage of everything from the military use of space to private companies like SpaceX and Virgin Galactic launching their own rockets.

“They’re investing billions of dollars in this and so there are lawyers there that are doing space law.”

“There’s so much to know about. It’s so vast. I’d like to figure out more things about space so we can pass that along to the next generation of space lawyers."

All the while, she said, she and her generation of law graduates are anticipating the future of technology and society.

The moot court team Nebraska hopes to compete in the regional competition at Georgetown University in Washington, D.C. later in March. The Asia/Pacific regional will be held in April at the University of Adelaide. Teams successful in any of the four international regions will compete for the Lachs Space Law Moot Court World Final taking place this fall in Germany.

Last year the Nebraska Law team placed second overall at the North American rounds of the competition in a field of 16 teams.

**Trivia note: the phrase “if man is still alive; if woman can survive they may find…” is an obscure reference to the song “In The Year 2525” by the Nebraska-born group Zager and Evans. It reached number one on the Billboard Hot 100 in 1969. Click here to listen to it on YouTube.