Controversy over voting rights for people released from prison produced an extraordinary scene in the Nebraska Legislature Friday. And Gov. Pete Ricketts stirred controversy by inviting the National Rifle Association to relocate its convention to Nebraska.

It was a quiet scene as lawmakers approached the end of what’s called final reading. That’s the last of three stages of voting, to give bills final approval, and there’s usually no debate.

But the quiet was upended when Sen. John Murante tried to amend a bill, sponsored by Sen. John McCollister, aimed at restoring certain rights – for example, the ability to get federal student loans -- after people serve time in prison. Murante proposed an amendment to specify those rights would not include the right to vote, which the Legislature has previously said requires a two-year waiting period.

Sen. Justin Wayne said the amendment was unnecessary – that existing law on voting would continue in effect. And Wayne, whoses mother is white and father is black, said the amendment tapped into Nebraska’s history of discrimination. “This isn’t about felon rights. This is about what it actually means to a young African American who is watching this right now. We were the only state to be vetoed, not just once but twice, over this issue: the right of African-Americans to vote,” Wayne said.

Wayne was referring to Nebraska’s being rejected for statehood after the Civil War because its constitution restricted voting only to white people. Wayne said restrictions on felons voting is a modern continuation of that policy.

Last year he Wayne sponsored a bill to eliminate the two-year waiting period, but it was vetoed by Gov. Pete Ricketts. Murante referred to that, responding to Wayne. “If you do not like that policy, I understand. We had a debate on the bill last year. It went through this Legislature. It came out of the Government, Military and Veterans Affairs committee, it went to the governor’s desk, and it was vetoed. There were insufficient votes on this floor to override that veto,” Murante said.

Murante’s attempt to amend the bill under consideration Friday failed, with only 6 senators voting for it, and 21 against. But then, as McCollister called for a final vote on his bill, Speaker Jim Scheer presided over a voice vote on whether to adjourn.

“Colleagues you’ve heard the motion. All those in favor to adjourn say ‘Aye,’” Scheer said, prompting a chorus of ‘Ayes.’ “All those opposed say ‘Nay,’’ he continued, prompting an arguably louder chorus of ‘Nay’s.’

“I believe the 'Ayes' have it," Scheer announced, adjourning for the day.

As senators prepared to leave the legislative floor and the tv cameras and microphones were turned off, Sen. Ernie Chambers launched into a fiery denunciation of Scheer, saying his colleagues knew it was wrong. “All of you know. That’s why you’re staying here now. He was wrong, wrong, wrong. I have nothing but contempt for it,” Chambers declared, pacing back and forth in an extraordinary if not unprecedented performance, as many of his colleagues stood transfixed. 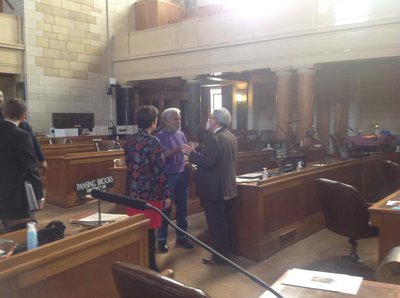 Scheer said later he handled the adjournment motion the same way he does on noncontroversial matters. “Those are judgment calls when we do voice votes. Certainly the ‘Nays’ were louder. But because you talk louder doesn’t mean there are more of you,” Scheer said.

Responding to Chambers' blaming the Republican Party for the controversy, Scheer, a registered Republican in the officially nonpartisan body, voted against Murante's attempt to amend the bill.

In his speech after adjournment, which lasted about five minutes, Chambers threatened, as he often does, to bring the session to a screeching halt. He also criticized Murante personally, implying that his Italian-American heritage should make Murante more sensitive to historic discrimination. Chambers vowed to eat pizza this weekend to fuel himself for a filibuster next week.

Murante said he was unfazed. “Sen. Chambers gives vulgar, personal attacks with people with whom he disagrees. The nature of the attack is incidental to me – it doesn’t matter. It comes with the territory of disagreeing with Sen. Chambers. I accepted that when I ran for the Legislature. And I accept that every time I take Sen. Chambers on when I think he’s wrong,” Murante said.

Scheer said the bill that prompted all the controversy would be back up for debate the next time the Legislature gets to final reading.

Also Friday, Gov. Pete Ricketts stirred controversy with a Tweet inviting the National Rifle Association to move its upcoming convention to Nebraska. The invitation followed First National Bank of Omaha’s decision to discontinue an NRA credit card, and after the mayor pro-tem of Dallas urged the organization to reconsider coming to Dallas and said it would face protests at its planned convention there. Ricketts tweeted “We want your convention in Nebraska. Nebraskans love our constitutional rights!” That prompted a storm of responses, many of them negative.

Nebraska Democratic Party Chair Jane Kleeb was among the critics. “Nebraskans are standing up in very strong ways to say they do not support the NRA. There are a lot of Democrats who are proud gun owners and are responsible gun owners. And we also at the same time want gun reform,” Kleeb said.

Patricia Harrold, president of the Nebraska Firearm Owners Association, saw it differently. “I think the members of the Nebraska Firearm Owners Association would welcome a fantastic opportunity like that for such a large event (the NRA convention) to happen in Nebraska, and hope to further communication and conversation towards solutions that will work for everyone,” Harrold said.

Ricketts was out of the state and didn’t respond to a request for comment on his tweet. The NRA has said it has no plans to cancel the Dallas convention.