Voices of a Changing Nebraska: ‘They Don't Understand Us’

2020 was a year that laid bare our deep divisions as a nation. Over the past few months, America Amplified reporter Megan Feeney has been following up with a small group of Nebraskans to find out how they’ve been navigating their lives in a year defined by a pandemic, a presidential election and increased awareness of racial injustice.

Growing up in Detroit, Barber learned from his mother that the American ideals of liberty and justice hadn’t been equally applied.

“Now, at that age, I didn't understand that it was systemic. I just understood from Civil Rights and slavery and Frederick Douglass that we have a history of having a hard time in this place.” 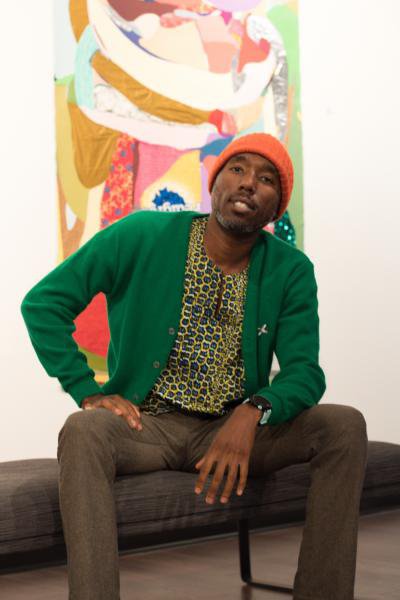 “Art gave me that chance to create my own space, to make a living from it.” Barber. (Photo by Lasha Goodwin, America Amplified)

Barber, a painter, mixed media, and performance artist who until recently resided in Omaha, Nebraska, didn’t want to submit to any of the conventional rules of how to live in the United States.

“Not the status quo, like a nine-to-five or anything like that, because I felt like at any point it can be pulled from under my feet. Like if history were to repeat itself, I felt like I was just two, three steps from chattel slavery,” he said. “Art gave me that chance to create my own space, to make a living from it.”

In his paintings, Barber says he seeks to communicate the oneness of humanity, about moving beyond the constraints of race and gender.

But after NYPD officer Daniel Pantaleo killed Eric Garner in 2014 by putting him in a chokehold for selling untaxed cigarettes, Barber felt compelled to create a more direct, and personal, message about racial injustice.

He installed his apartment in a gallery space and invited viewers to flip through his books and journals.

“To get to know this Black body and see this Black body as a person and find connections and intersections between myself and them. I felt like the reason the reason we Black Americans are readily killed and discriminated against by society is that they don't understand us,” he said.

To that end, he also sees his own body as a medium. Barber is a runner, which he does for self-care, and also activism -- this past summer, he ran 125 miles to raise money for the NAACP.

But beyond that, he also views his running as performance. Running while Black has a fraught history in this country.

He wants people to consider this as he claims his right to run, his right to space and fresh air and the joy of movement.

“It’s giving people the chance to see the humanity in this person,” he says

Megan Feeney produced this story as part of the America Amplified: Election 2020 initiative, using community engagement to inform and strengthen local, regional and national journalism. America Amplified is a public media initiative funded by the Corporation for Public Broadcasting. You can follow America Amplified on Twitter @amplified2020.