Among the many groups helping Nebraskans recover from flooding, one has a particularly interesting story. Made up of veterans, first responders, and civilians, Team Rubicon formed after the 2010 earthquake in Haiti. They’ve been responding to disasters around the world ever since. This week, they’re in Nebraska.

The work of flood response isn’t glamorous. This home in Monroe, Nebraska has mud all over the first level floors, despite a day’s work by Team Rubicon volunteers.

Sam Brokenshire is incident commander for Team Rubicon in the Columbus area. He points out the drywall removal that’s been done so far in the water-damaged home.

“What they do, the water came up to, you can see it came up to a certain level here. What they’re doing is cutting it out at four foot. They could have cut it out at two foot, but it’s easier for contractors to come in and just put a full sheet of drywall rather than having to cut a half sheet,” Brokenshire said.

This home wasn’t hit as badly as some others. The team hopes to finish the whole project in about a day and a half. 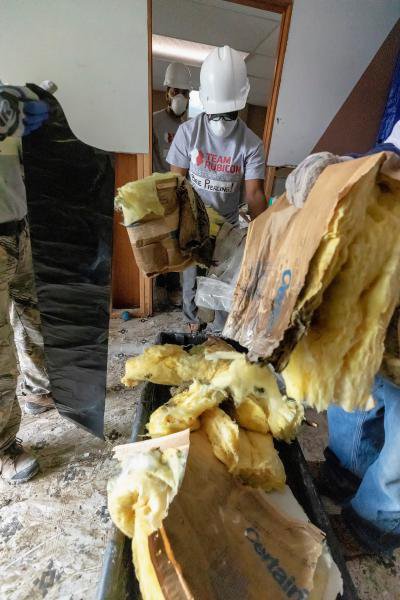 John Marsack is a Team Rubicon volunteer and a 23-year veteran of the US Navy. He got a chance to talk with the couple who own the home.

“His father, he’s a Marine Corps veteran, swapped some stories with him. Yeah, no it was good. You know, taking care of another veteran family, so it’s doing great,” Marsack said.

Marsack was a diver for the Navy and now runs a commercial diving company in Orlando Florida. He says when he retired from military service he felt there was something missing.

“Once I got out I started working, but I wasn’t really serving, you know, so I had to get back, get back to helping people. I don’t like to help myself, you know, I like to help others more. So that’s what we’re here doing,” Marsack said.

That seems to be a common theme for the volunteers here. Debbi Littrell is also retired from the US Navy. She signed up for Team Rubicon after seeing it nominated for a CNN hero award.

“This is just a great fit for veterans. It’s a great fit for other people too, but it really is leaning toward veterans I think. And it doesn’t matter your age. I mean, I’m 65. We’ve got a 25-year-old with us. So it’s just a good deal,” Littrell said.

Littrell explained some of the lessons from military service she carries into her work with Team Rubicon.

“Work together. You’re a team, you know. You don’t need to cowboy it. Everybody’s there to help you. And if you need to take a break, take a break,” Littrell said.

Working smart is built into the way the organization works. In Columbus their headquarters is the Columbus reserve center, a space which also serves the Nebraska National Guard. There, they’ve filled a room with maps and charts, keeping track of where their teams are and what still needs to be done.

Brokenshire says Team Rubicon rates disasters from one to five, five being the worst. Flooding in the Midwest this spring is rated a four. It’s been dubbed Operation Heartlander, and it’ll probably take them through most of it.

“Omaha was first, and then this is the second one, and as the water proceeds down the country, we’re gonna be, as the needs are met here, we’re gonna leap frog this facility further down, Maybe St. Louis or even further down into Missouri,” Brokenshire said.

While they’re here, Team Rubicon works with other non-profits to share the work and to figure out what a community may need.

“We have many capabilities, but we try and tailor it to what the community needs. We don’t come in and say ‘we’re gonna do this for you.’ We’re humble enough to realize we just need to fill what they can’t do for themselves,” Brokenshire said.

In the Columbus area, that includes mucking out houses. It also means doing damage assessments in Colfax County. 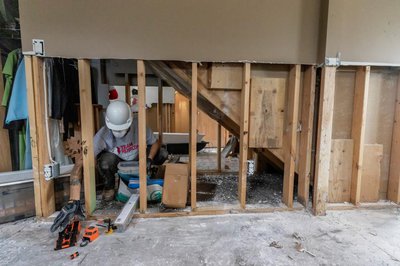 Team Rubicon didn’t arrive at the very beginning of the flooding, and they’re currently only scheduled to stay for two weeks. Brokenshire says their work now follows up on the immediate response efforts by other groups.

Back at the work site, it’s clear why this community needs some time to catch its breath.

Eric Jaekle is a U.S. Marine veteran who served in Iraq and Afghanistan. He compared the devastation of a natural disaster to the aftermath of war. He also says flooding is one of the hardest for families emotionally.

“Tornado knocks it down, trashes everything. A fire burns to the ground. A flood, you can see the rot, you can see the mold. Some people still living in it, cause they have no choice. You actually see all your memories and belongings float and rot away within the water. So for me, it’s the worst,” Jaekle said.

By the time Team Rubicon arrives, that damage is already done. By the time they leave, they hope to have given families a safe, clean place to start over.