A senior scientist at the U.S. Department of Agriculture filed a whistleblower complaint on Wednesday accusing the federal agency of suppressing research findings that could call into question the use of a popular pesticide class that is a revenue powerhouse for the agrichemical industry.

Jonathan Lundgren, a senior research entomologist with the USDA’s Agriculture Research Service who has spent 11 years with the agency based in Brookings, S.D., said that retaliation and harassment from inside USDA started in April 2014, following media interviews he gave in March of that year regarding some of his research conclusions.

Lundgren’s work has included extensive examination of a class of insecticides known as neonicotinoids, or neonics, which are widely used by U.S. farmers to control pest damage to corn and other crops, helping protect production. The insecticides are sold in forms that both are sprayed on plants or coated on seeds before they are planted. They are also used on plants sold by lawns and garden retailers. 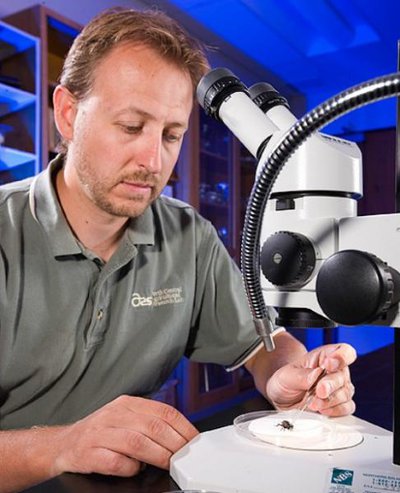 Lundgren is the first to file a formal complaint since questions arose about the scientific integrity of research by USDA scientists. The talk has dogged the agency for the last few years and some critics complain that scientific findings on a range of topics are suppressed if they contradict the interests of powerful corporations.

USDA declined to comment about Lundgren's case or his specific complaints. But in a statement, the agency said it takes the integrity of its scientists' work seriously.

"We recognize how critical that is to maintaining widespread confidence in our research among the scientific community, policy-makers, and the general public," the statement said.

Neonicotinoids are a particularly sensitive topic because some scientists have linked them to dramatic declines in honey bee colonies, which help pollinate roughly a quarter of the food consumed annually in the United States.

The agrichemical companies that sell neonic insecticides, such as Bayer AG, BASF, Syngenta AG and others, have said other research shows that neonics are not the problem, and they have been actively lobbying lawmakers and regulators against limiting use of neonics.

Neonics are a key part of a growing global insecticide market projected at roughly $15 billion in revenues.

Lundgren and other scientists have raised questions about both the effectiveness and environmental safety of the insecticides. Research has linked “neonics” to the demise of Monarch butterflies and honey bees, in particular. Two research reports by Lundgren concluded that farmers received no yield benefit at all in using the costly neonic seed treatments.

After Lundgren spoke out about some of his findings, USDA managers blocked publication of his research, barred him from talking to the media, and disrupted operations at the laboratory he oversaw, according to the complaint filed with the federal Merit Systems Protection Board Wednesday. The filing follows an internal complaint Lundgren lodged with USDA in September 2014.

“Dr. Lundgren’s case underscores why legal protections for government scientists are sorely needed,” said Jeff Ruch, executive director of Public Employees for Environmental Responsibility (PEER), which is providing legal services to Lundgren in his whistleblower action. “Bureaucracies under political pressure from corporate stakeholders routinely shoot the messenger, even if they are wearing a lab coat.”

PEER filed a legal petition with the USDA in March of this year, stating that the agency needed to strengthen rules to protect its scientists from internal censorship, “political suppression or alteration of studies.”

Documents supplied by PEER show that the USDA deemed Lundgren’s internal complaint to be without merit, and in August of this year the agency suspended Lundgren without pay for two weeks. It was his second suspension in the past two years. The agency cited violations of travel procedures and failure to follow supervisory instructions as reasons for the suspension.

USDA said Lundgren’s submission of a manuscript on neonic harm to Monarch butterflies for publication in a scientific journal violated supervisory instructions. Lundgren’s supervisor told him the manuscript was “sensitive’ and would require elevated levels of approval, the documents show.

Carey Gillam is a contributing reporter based in Kansas City, Mo. She has worked as a professional journalist for more than 25 years, including 17 years covering food and agriculture for Reuters newswire.