During recent flooding in Nebraska, the US Geological Survey measured flooding along rivers and streams. That data is used by the National Weather Service and the Army Corps of Engineers to predict and control floods.

Mike Andersen is a hydrologic technician for the US Geological Survey.

“We’re doing a discharge measurement on the Platte River at Ashland. We’re using an acoustic Doppler current profiler to measure the velocity or the speed of the flow. It also measures the depth. We’re looking for total discharge. We come out about every six weeks to measure. Right now, with the floods, we’ve been out about every other day measuring,” Andersen said.

Total discharge is a measure of how much water is coming down the river at any given time. 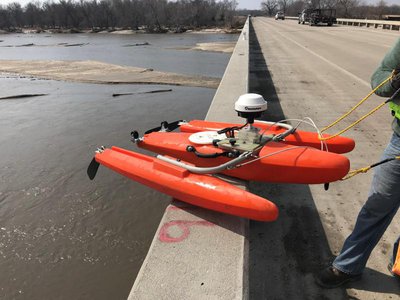 The actual instrument used to measure the depth and velocity of the water is mounted on a tiny orange boat. Andersen’s partner Kyle Kavan pulls it along under the bridge by a rope.

Anderson points across to a railroad bridge that runs parallel to the highway.

“You can see all the debris on the upstream side of the bridge. At its peak, when it was really flooding the most, it was really difficult to measure. We lost one instrument unfortunately due to it getting caught on some debris, it got taken away,” Andersen said.

“We’re just monitoring and measuring as it recedes now to see how the stream bed has changed, how the relationship between the river height of the stage in relation to the discharge has changed,” Andersen said. 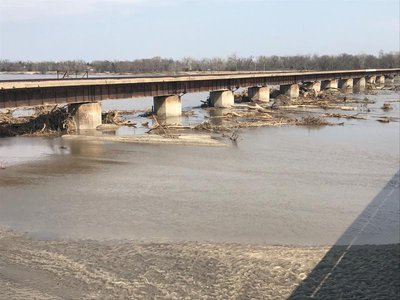 Debris under the railroad bridge over the Platte River near Ashland. (Photo by Allison Mollenkamp, NET News)

That data doesn’t just stay with the US Geological Survey. It’s also used by the National Weather Service.

“It gives us a really good idea of what’s happening at that moment. You know, within just a few minutes of taking that measurement and observation, we’re able to get that information into our systems and know whether or not we need to issue flood warnings or flash flood warnings. And then also it goes into our rather complex river modeling system, which also helps us to make long-range predictions,” Barjenbruch said.

Those predictions are especially important right now, with many rivers and streams still high. The National Weather Service is predicting one to two inches of rain later this week. That could be a lot of water, but they expect it to come slowly.

“But with that in mind, it’s gonna be something that we watch very closely because we’re certainly in a careful state right now where even minor flooding can cause significant impacts, especially in the clean-up process,” Barjenbruch said.

That clean up comes in the wake of floods that were far from minor. Barjenbruch says that in several locations, flood gauges saw all-time highs. Some gauges have been in place for more than 50 years. 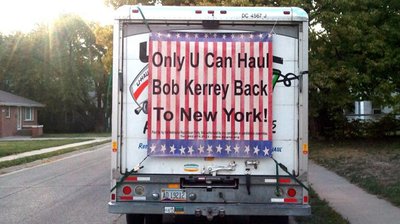 That data is useful to the Army Corps of Engineers, which controls many dams and reservoirs in the Missouri River system.

Eileen Williamson is a spokesperson for the Northwestern division of the Army Corps of Engineers. She explained how gauges were used to track recent flooding.

“The storm that came through in mid-March, you know, initially it looked like it was coming through as snow over the Niobrara basin, and as the stream gauges started to indicate, it was coming through not just as rain, but apparently warm rain that was taking the rain and the snow with it into the different tributaries, and as those gauges went up, we knew that more water was coming into the Gavin’s Point reservoir,” Williamson said.

That reservoir doesn’t have much flood control storage, which meant that the Army Corps of Engineers had to release water into the river system.

River gauge data and measurements taken manually by hydrologic technicians inform dam decisions and flooding predictions. They are taken at about 140 locations around Nebraska, and about 8,000 locations around the country.