A new drug to help combat the effects of Parkinson’s disease was demonstrated as safe and generally well tolerated during preliminary stages of a human trial. The findings of the study were published in the npj Parkinson's Disease medical journal.

Parkinson's disease is a progressive neurodegenerative disorder which has no cure and has very limited treatments. It affects nearly one millions Americans.

Dr. Howard Gendleman is professor and chair of the Department of Pharmacology and Experimental Neuroscience at the University of Nebraska Medical Center. Gendleman was also one of two UNMC scientists to conduct the research.

The research used a blinded clinical study – one where patients, their families and doctors were unaware whether the patient was given the medicine or a placebo.

“We were very excited to see that what we had seen in rodents - is actually true in humans,” Gendleman said. “We’re able to transform the immune system from something quite harmful to something that was reparative, supportive to the brain (with) Parkinson's disease.” 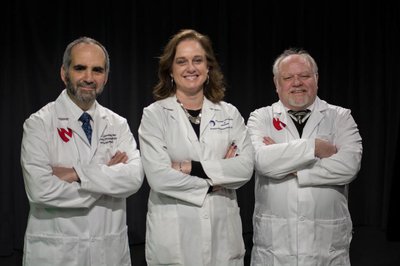 Gendleman said as the disease advances, patients succumb to motor and cognitive dysfunction. Regulatory T cells or Treg cells in the blood of patients help modulate the immune system. The study focused on the way the cells function - transforming bad cells into good cells.

“We saw that in model systems of Parkinson's disease - where we can take a toxic cell in the body in the blood and transform it into something good something that will nourish and repair the brain,” Gendleman said.

Gendleman said several of the patients saw a modest improvement in neurological function. He said it’s still early but he’s cautiously optimistic about what the future may hold with Parkinson’s research.

Tim Hoffman was one of the patients during the trial. He said the study started off rocky for him, but he stuck with it.

“My family encouraged me to keep with the program so I did and I started feeling better after the short period of reaction when I first started in in the program,” Hoffman said.

Hoffman, who’s had Parkinson’s since 2007, said the first few days he had stiffness and soreness in his neck but after that he didn’t have any trouble.

“Overall, I could walk better and I started feeling better after a couple weeks,” Hoffman said. “My fine motor skills seemed to really improve.”

Dr. Pamela Santamaria, a Nebraska Medicine neurologist, oversaw the clinical support portion of the study. She worked with Hoffman during the study. She was excited to see his progress and the improvement of several other patients.

“I think it's exciting to be in a study that may actually help to reverse some of the symptoms of Parkinson's disease or potentially help slow down the rate of progression of Parkinson's,” Santamaria said.

She said she sensed a change in certain patients and they could too.

“Someone would say, ‘I can button my shirt a little better,’ - ‘I can walk a little faster,’ – ‘I feel like I can get from point A to Point B a little quicker,’ so they were really excited,” Santamaria said.

Santamaria said the study had a small number of patients so the enthusiasm is tempered a bit, but her team and several of her patients are ready to be a part of the next step.

“But I think it's a great stepping stone to going forward helping patients,” Santamaria said.

Gendleman agrees. He said the early evidence shows a strong possibility these kinds of drugs and format could have a broader positive outcome.

“This excitement must be translated to larger numbers of patients so we can be secure that we really do indeed have a drug that is helpful in humans,” Gendleman said.

Some patients experienced skin irritation, bone pain and allergic reactions, but side effects were minimal. Gendleman points to the planning of a larger study with more patients in the next couple years.

For more stories from KVNO News, visit their website.

Could There Be Another Flu Pandemic? Looking Back at the 1918 Influenza
More women in Nebraska finding careers in natural resources-related fields
Graduates of Financial Management Program Often Experience Improved Health