UNL students were protesting the Vietnam War, and the FBI was watching

Nebraska college students were protesting the Vietnam War in the late 60s and early 70s. And you might be surprised how closely they were being watched, and who was watching.

Steve Tiwald remembers going to a Nebraskans for Peace meeting in Central City. A couple days later he was talking with Lincoln Police about plans to protest Vice President Spiro Agnew’s appearance at the University of Nebraska-Lincoln.

In part one of this two-part series we looked back at the growth of Vietnam War activism at UNL and one week in 1970 that was a potentially dangers flashpoint on campus. 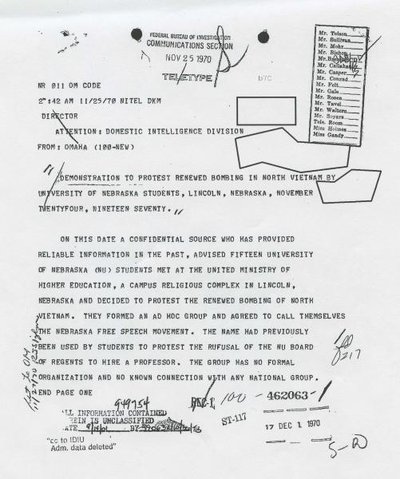 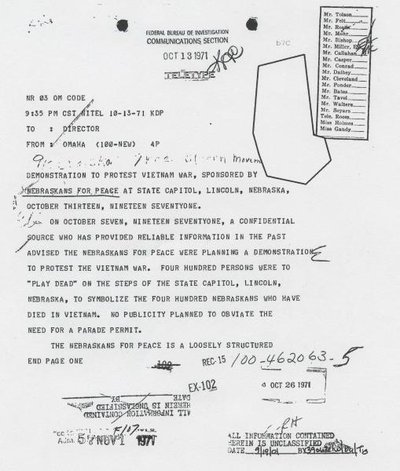 Memo from the Omaha FBI office cites a "confidential source" for information about a planned Nebraskans for Peace protest. 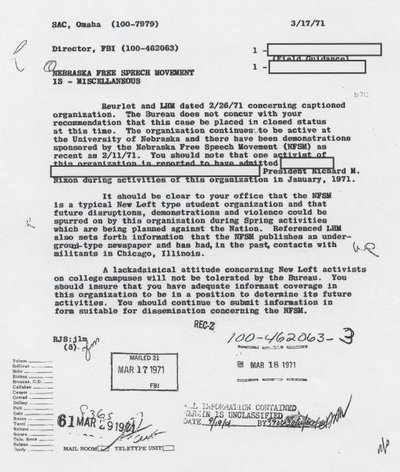 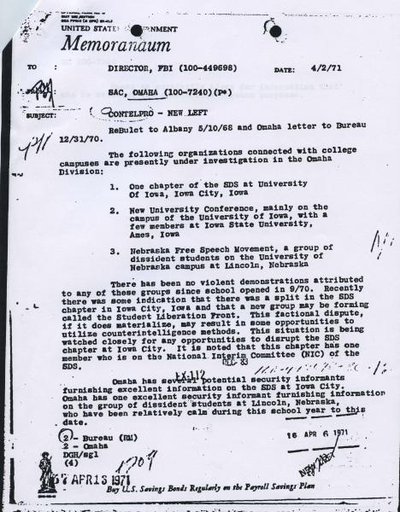 A memo from the Omaha office to FBI headquarters about Students for a Democratic Society (SDS) chapters in Iowa and Nebraska, developing informants and "opportunities to disrupt."

Some FBI COINTELPRO New Left documents can be found HERE on the FBI's web site.

“The Lincoln police official that we were meeting with said, ‘Oh, I'm aware of this meeting you had in Central City, and we have this FBI report about it,’” Tiwald remembered.

“I had a friend from high school who joined the army and was in army intelligence. He told me one day, ‘You know you have a file, the FBI has a file on you,’” said Dan Ladely, another UNL student involved in anti-Vietnam War activities. “Which really didn’t surprise me.”

“I assumed that as soon as I became active in this area that I was being under surveillance,” said Paul Olson, an English professor and anti-war activist at the time.

Paranoid concerns of Vietnam War activists who didn’t trust the federal government? No. The FBI was keeping an eye on college campuses during the war. A close eye.

Mostly through a Freedom of Information Act request, NET News obtained a pile of FBI documents offering a snapshot of how the agency was watching so-called New Left groups at UNL.

One example is a three-page teletype from the Omaha FBI office to the agency’s domestic intelligence division about a November 1970 student protest. It starts: “a confidential source who has provided reliable information in the past advised 15 University of Nebraska students met at the United Ministry of Higher Education, a campus religious complex in Lincoln, Nebraska, and decided to protest the renewed bombing of North Vietnam.” It continues with great detail about the students walking into the draft board office, reading a letter and leaving.

There’s a memo listing members of a student group and that the FBI has evaluated their “propensity for violence.” Details of a meeting of students and faculty at a private home to plan a demonstration. Even a report on a campus speaker, noting students “had expected a glib spokesman for issues of interest to protesting students but instead he was very dull.”

The FBI documents contain lots of references to “established confidential sources” at UNL, and the need to develop informants. That doesn’t surprise Ladely.

“We were suspicious a little bit of some of the people who were hanging out there with us. Most everybody I knew, we knew each other pretty well,” Ladely said. “But there were a couple of people kind of hanging on that we didn't know where they came from, and they weren't from here. So we were kind of aware of that, but not terribly aware. I think we found out all that mostly after the fact.”

There are also references to so-called counterintelligence efforts, requests from FBI headquarters for field offices like Omaha to be alert for “opportunities to disrupt activities.” Here’s how this happened in one case. As campus administrators were deciding whether to officially approve an anti-war student group, the FBI attempted to influence decision makers by sending the school a copy of a magazine article that told about problems the group caused on another campus.

“Certainly the sense was that that was going on,” Olson said. “And how much it was targeted to innocent people, and just an effort to intimidate students from having free expression whether they felt their lives were on the line. The FBI may have been onto some people that were planning nefarious activities. I never had any sense of that. What does bother me is there were threats from the right as well, and I didn't ever have a sense that the FBI was interested in those things.”

Tiwald said it was unnerving to know law enforcement agencies like the FBI were…his words…“spying on Nebraskans” who were exercising free speech rights to protest the war.

“We had to change the way we looked at those things”

John Fox is the FBI’s official historian. We talked with him about what the FBI was doing related to Vietnam War protesters.

John Fox, FBI Historian: The 1960s was a period of time when the FBI was casting its umbrella fairly widely as far as looking at what was considered subversive or radical behavior. It ranged across elements of the civil rights movement, of the anti-war movement and some of the other groups associated with that. As far as unrest with regards to the anti-war movement, there were several statutes under which some of the investigations were conducted. Sometimes there was the destruction of federal property involved. There was some of the illegal draft resistance activities that might have fallen under the Selective Service Act and things like that, but the FBI also cast more of a broad look at what it considered to be subversive threats.

Mike Tobias, NET News: When you look at the sorts of things that the FBI was paying attention to, especially on campuses, what were they?

Fox: On campuses, it was a combination of things. On the one hand, there was the very broad looking at what it considered to be subversive movements, starting with Students for Democratic Society, a lot of the anti-war movement groups that were coming about, and then individuals who were either prominent leaders of these types of groups and/or who were involved in altercations that led them into other parts of the justice system, whether it was property violations or it was other kinds of illegal activities. It was that combination of both a broad look at ideological groups but also at some of the illegal behaviors that fell under those. Of course, in retrospect, again, the Bureau came to realize that that broader look at ideology didn't meet our mission and we had to change the way we looked at those things.

Tobias: In looking at some of the documents, it’s surprising the depth of stuff that was falling into the attention of the FBI. In the case of the University of Nebraska, seemingly insignificant student groups that were meeting.

Fox: Part of that, I think, does go towards that casting a subversive umbrella. It was the idea that anybody who talks about overthrowing the government or radically changing the government or doing this or doing that fell under that watchful eye. Part of it was simply the Bureau was looking at so many different things and people were sending in so many different things, whether it was local law enforcement, local politicians, people that the FBI was working with or that sort of thing. The FBI just became this vacuum, in a sense, to catch all of this information.

Tobias: What would have been done with a lot of this information during that time?

Fox: A lot of it ended up just going into the file and staying there. In certain cases, the bureau would report some of that material back to campus administrators or to local political leaders who were looking into the issue. It could be any range of things, local police if they thought that that was the way it should go. It was a wide range of things in that sense.

Some of what the FBI was doing at the time fell under an operation called COINTELPRO. The FBI, on its web site, notes that it began “COINTELPRO, short for Counterintelligence Program, in 1956 to disrupt the activities of the Communist Party of the United States. In the 1960s, it was expanded to include a number of other domestic groups, such as the Ku Klux Klan, the Socialist Workers Party, and the Black Panther Party. All COINTELPRO operations were ended in 1971. Although limited in scope (about two-tenths of one percent of the FBI’s workload over a 15-year period), COINTELPRO was later rightfully criticized by Congress and the American people for abridging first amendment rights and for other reasons.”

“COINTELPRO was a small subset of things that the bureau did under this,” FBI historian John Fox said. “I think the Congressional committees found that there were about 2,500 to 2,600 COINTELPRO-type activities over the course of 1956 to '70, so 16 years or so thereabouts. Most of them were targeted at the Communist Party and the Socialist Workers Party and the third group would be the Ku Klux Klan. Then a number of actions also went against some of these smaller SDS (Students for a Democratic Society) type groups and New Left groups, as they were called. These were activities that took the FBI out of its law enforcement mission and actually were trying to disrupt some of these groups that the bureau considered radical at the time.”

Editor's note: This story is part of our "Best of 2017" Signature Story report. The story originally aired and was published in September.