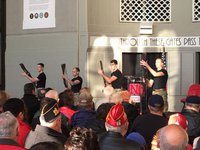 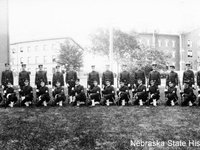 General John J. Pershing started a rifle drill team at the University of Nebraska-Lincoln in the 1890s. The practice spread to other universities across the country, but after more than a decade of inactivity was only recently restarted at UNL.

Some stories have twists and turns. This one has spins and tosses. It’s about a group of ROTC cadets at the University of Nebraska-Lincoln who are reviving a tradition started here more than a century ago – a precision rifle drill team known as the Pershing Rifles.

"Honestly, when I came here I knew nothing about General John J. Pershing," said Zackery Day, one of the cadets who quickly learned Pershing was the man who started the drill team in the 1890s. 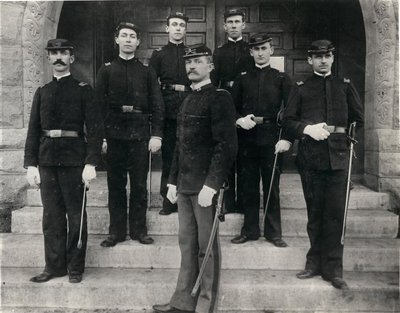 Pershing was a university military science professor who would go on to lead the U.S. forces in Europe during World War I. Through the years, the University of Nebraska rifle team named after him would be very successful, winning many competitions against the growing number of other drill teams across the country. But when Zackery Day arrived at UNL, the team had not performed in more than a decade.

Day had been a part of a drill team at his high school -- Bellevue West. He and a few others went to work to restart the program at UNL.

The Pershing Rifles execute marching drills with decommissioned Springfield 1903 rifles. They spin the rifles and even toss them back and forth, sometimes blindly over their shoulders to each other. The rifles they found that were previously used at the university, though, were hardly performance-ready.

"I don’t know how long they’ve been there, but they were in complete disrepair," Day said. "I’d say only one of them was actually able to be used."

Another team member, Mark Wagner, says fixing the rifles wasn’t easy. They had to make their own repairs. 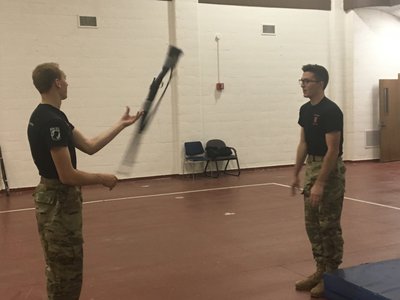 "Springfield 1903s are not in production anymore. It’s a lot of money to try to buy pieces or even find them," Wagner said. "So that’s why we try to make our own. We deal with what we got, really."

Of course with a new drill team doing complicated maneuvers with the rifles, it’s not going to be perfect. The rifles get dropped… a lot.

And sometimes those rifle tosses that miss the mark, can leave a mark.

"I got kind of stabbed almost 20 minutes ago trying to do one of our moves. The rifle came down wrong, hit me on the right side," Wagner said. "So yeah, you get pretty dinged up if you’re not careful, or if somebody has a bad toss to you or something like that."

The mistakes, though, are all part of the learning process. The routines look polished when they’re performed, but they usually start out as a freewheeling brainstorming session.

Megan Deprez says learning every step and toss in a routine can be time-consuming and demanding. 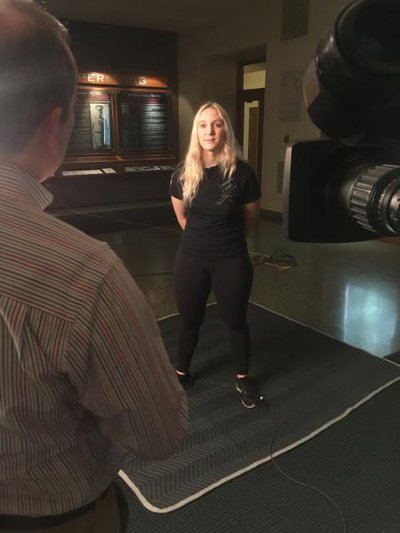 "The rifle’s around 15 pounds, maybe 20 pounds, so throwing it is just physically tough," Deprez said.

Deprez says the drills teach them to persevere, though, and that’s what she’s done as one of just a few females on the Pershing Rifles team at UNL.

"You don’t see many female Pershing riflemen," Deprez said. "So yeah, I think being a female in a male-dominated thing is awesome. Being a part of that, and changing military culture and leadership, is amazing."

After hours of practice, it’s time to move on to a performance in front of a crowd. That’s the moment it all becomes real for Zackery Day.

"From the time they say, “Now introducing the Pershing Rifles,” the butterflies start flying," Day said. "And it’s hard. Your hands are shaking and you’re like, 'Oh man. Am I remembering everything?' And then, yeah, you get done. It’s so much fun. It’s really a gratifying experience."

An experience more than a century in the making and one you have to think would make General John J. Pershing proud.

"Honestly, it’s just like we’re his company. We want to be the best there is," Wagner said.

"I think it’s really cool that Pershing himself was here, such a great leader in World War I. He’s really impactful," Deprez said. "Yeah, that affects me every day. I look at, I walk to my classes and look at the sign outside that says Pershing Rifles, and I think, I’m a part of that."