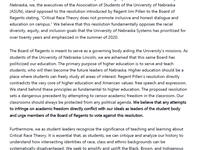 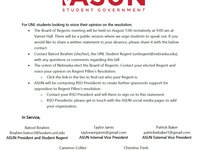 The University of Nebraska-Lincoln student government organization, ASUN, released a statement Monday directly opposing a resolution introduced by Regent Jim Pillen on Critical Race Theory earlier this month. ASUN’s statement said Pillen’s resolution “Fundamentally opposes the racial diversity, equity, and inclusion goals that the University of Nebraska Systems has prioritized for over twenty years and emphasized in the summer of 2020.”

"I think students right now are really confused and I think they are hurt as well. I think they needed to know that ASUN is advocating on their behalf."

She said she felt she had an obligation to the student body to release the statement.

"I ran on the notion that students were always going to be my only stakeholders. And that at any meeting or any conversation I was in, that I would always have students' voices and concerns at the forefront of those conversations.”

In their written statement, ASUN went on to say they "recognize the significance of teaching and learning about Critical Race Theory.” ASUN is urging students to speak out at the Board of Regents meeting on August 13th. Pillen, who is running for Governor, formally asked other regents to oppose critical race theory in UNL’s curriculum.