UNL Researcher Focuses on Horse Therapy for ADHD and Autism

A professor at the University of Nebraska-Lincoln, Michelle Howell-Smith, is looking at the benefits of equine therapy as a way to help relieve stress and social anxiety from people with mental conditions and physical limitations. The research was spurred by her own daughter, who has autism, who benefited from equine therapy.

Brandon McDermott, NET News: There are different types of equine or horse therapy. Can you explain some of these for us?

Michelle Howell-Smith, Professor, researcher at the University of Nebraska-Lincoln: Equine therapy can target a variety of different issues. They have equine-facilitated learning for people who maybe are dealing with emotional or cognitive issues. There's also special kinds of equine therapy, where you work with a licensed therapist – such as a speech therapist, a physical therapist and occupational therapist – where they can target those types of activities while you're riding a horse. There's a really vast array. In addition to those, there's also traditional counseling therapy, so working with a licensed mental health practitioner. There's really a wider range of different kinds of challenges somebody might have that they could address direct line therapy.

McDermott: How could a speech therapist help with equine therapy?

Howell-Smith: Part of the thinking is that for people when you are on a horse, it engages your body in a different way. So if you think about children going through speech therapy and sitting in a little office with a therapist and doing things that are repetitive over and over again, it may not be the most motivating or fun experience for them. 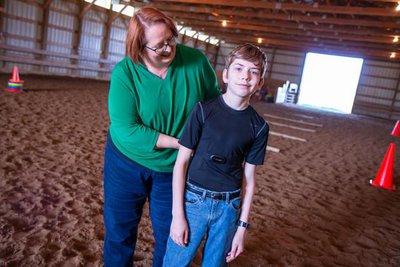 Michelle Howell-Smith hooks up a study participant with a heart monitor before therapy. (Photo by Kyleigh Skaggs)

But when they're on a horse, and their speech that they're working on is actually guiding their activities – so they're learning the importance of how to say walk when they want the horse to start moving, or they might use a board with stickers or pictures on it to point to which activity they want to do – so there's a direct outcome of the speech or communication that they're doing. It tends to be more engaging for people that are doing that.

McDermott: What do we know about these types of therapy and how they can help people with anxiety or stress?

Howell-Smith: Well, one of the things about horses is that they tend to have a real calming influence. And so there's a theory that the horses actually sort of project their heart rate and synchronize to the people around them. If you're around a horse and you're very, very anxious, the horse is going to feed off of that and they might be anxious and kick up or bump into other things or that type of thing. And so you learn very quickly that you need to sort of calm yourself down and get in sync with the horse if you want to be able to interact with them, groom them, saddle them, ride them, and so it has a very calming influence being around the horses.

McDermott: Your daughter has autism and went into equine-based therapy. How did that help her and did this spur some interest for you in this topic?

Howell-Smith: Absolutely. That's exactly how I got interested in doing research and equine therapy. My daughter was about five years old when we started with that client therapy. And we've done a lot of different therapies with her. We continue to do a lot of therapies with her, but this was the first time where there was a noticeable change in her behaviors. We saw her instead of just playing around groups of children. She would say, ‘Mommy, can we go make a new friend to play with?’ And so I would help her go make a new friend. Then pretty soon, she didn't need my help anymore, she would just say, 'Mom, I'm going to go make a new friend' and would cope and do that.

She became more interested in self-care and wanting to wash herself in the bathtub or choose what clothes she was going to wear, things that she had no interest in previously. It really just sort of turned a light on in her and when you witness that firsthand, especially for me, as a researcher, it kind of makes you think like, ‘Well, what's going on here? What is happening? How is this really making a difference in a way that all these other things hadn't?’ As I started getting into the research literature, that's what I decided that maybe there was something I could contribute there.

McDermott: Through research, the effects of equine therapy are being measured by stress hormones in saliva and MRI screens. Can you walk us through how this is evaluated?

Howell-Smith: So we look at how the stress hormones have a natural pattern throughout the day. And so we're looking to see, are we influencing that pattern? So you have to have good baseline data, to see what are the stress hormones on a typical day and then what does it look like on a day that you're writing? What does it look like after you're done writing those types of things? When we look at the fMRI, it's a little bit more challenging because you can't put a child in an fMRI machine while they're riding a horse. So it's something that they do after the event. 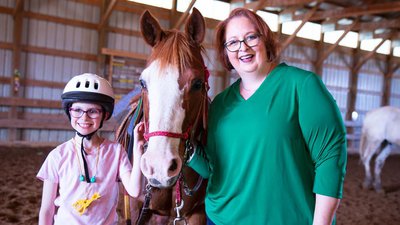 Michelle Howell-Smith poses for a photo with one of the study's participants. (Photo by Kyleigh Skaggs)

Again, we're comparing baseline data with data that's done throughout the treatment period. So not literally on the horse, but right after the horse and (it’s) looking at the connectivity of the neurons in the brain. Are we seeing things becoming more connected, and therefore more active in different regions of the brain versus the baseline treatment? And so our hope is that the children are able to be calmer, less anxious, have more connectivity going on in their brain as a result of their experiences, interacting with the horses and riding the horses.

McDermott: Could this potentially help people with other emotional or cognitive disabilities?

Howell-Smith: The particular study that I was working on with the pilot was we focused on children with ADHD, but it can cop it can be a treatment for any number of different types of conditions. And so people who are struggling with substance abuse, people who have depression anxiety – post-traumatic stress is probably one of the most researched areas and the most well-known type of treatment. There's a lot of writing centers that focus specifically on veterans who have PTSD and working with horses and, and the kinds of impacts that can have – it's really something that can address a lot of different issues because it is a very flexible type of intervention you can do.

McDermott: How about people with physical limitations? How could this equine therapy help them?

Howell-Smith: One of the great things about writing is that there's a lot of adaptive equipment that has been created – or adapted to work on horses – so there are special saddles, for people to be able to ride if they have problems with their core strength, be able to sit up taller, we use gate belts, which would be similar to something that they would use in a nursing care facility to be able to hold on to a rider and keep them balanced. We call them side walkers, but they're kind of like spotters that are maybe holding somebody as they're going around on the horse.

The great thing about being on a horse in particular if you have mobility limitations. Being on the horse allows you to sort of stretch out in ways that you can't do on a treadmill in a physical therapist's office. You're able to engage your muscles in different ways because you're supported by the horse, but you're still stretching and moving and exercising. And so that's where that sort of equine therapy with a physical therapist can be really, really powerful.

McDermott: So for folks listening in who are hearing about this equine therapy for the first time, maybe wondering are horses more special, for lack of a better term, than other animals, say cats or dogs for this type of therapy?

Howell-Smith: That's a great question. I wouldn't say they are more special because there's a lot of research on pets and service animals and how they can impact the quality of life for people who have different kinds of disabilities. But it's a different kind of thing. A horse is not something that you typically have in your home. That you have access to on a daily basis; obviously, some people do. So it's getting out of your normal environment, interacting with an animal that's not part of your daily routine. Horses are very large.

You don't really appreciate how large they are until you have, for example, my daughter was five years old, and she was riding for the very first time a draft horse. So they ended up finding another horse that fit her a little bit better. But being with something even a pony and being up off the ground, it's a different perspective and the way the horse interacts with you, as a herd animal as a prey animal. They're always sort of scanning their environment and interacting with their environment and the sort of nonverbal ways that's a really powerful therapeutic tool that's different than what a cat or dog might do on a daily basis. So I'm not discounting how pets in the home, we have lots of them. Those are good as well. But it is a little unique.