New research from the University of Nebraska-Lincoln shows military service could have a significant impact on whether women end up in science, technology, engineering and math (STEM) careers. The study is called "Collaborative Research: Soldiers to Citizens... to Scientists? How Military Service and GI Bills Shape STEM Trajectories.” NET News talked with Regina Werum, a professor of sociology at the University of Nebraska-Lincoln to discuss its findings.

Brandon McDermott, NET News: Looking at census data to see how military service plays into outcomes for STEM careers. What did you find?

Regina Werum: We're using data from the American Community Survey or ACS. It's collected by the Census Bureau every year, and people often call it census data. Our analyses show several things. First, veterans are more likely to earn a stem degree and work in STEM occupations than are civilians. This applies especially to women who are veterans. The advantage we see for veterans in STEM occupations works for those with and without college degrees. So across a broad range of occupations and skill levels. 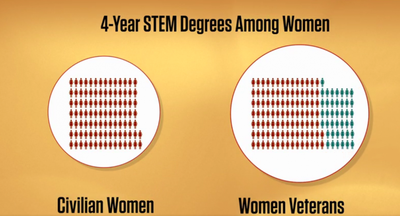 The boost we see for women veterans entering STEM fields holds across ethnic boundaries and is strongest for Latina and white women. This is important because when we look at stem occupations, there is a persistent or even growing gender segregation trend, especially in some STEM fields. The vast majority of job growth in STEM is in fields that remained heavily male-dominated. It's a highly competitive sector where the U.S. wants to stay in the lead (and) we cannot do that if we can't meet demand for workers with those skills.

McDermott: So women who have served in the military are more likely than men to end up in the STEM fields. How does this compare to civilian women and men?

Werum: Women veterans are more likely than civilian women as well as more likely than any men -- civilian or military -- to earn STEM degrees. For instance, by one measure 41% more women veterans than civilian women earn STEM degrees. This is important because for decades, both government and private sectors have encouraged efforts to broaden and diversify the STEM workforce. And even though there seems to be broad consensus on this goal, ongoing efforts to accomplish it, seem to have stalled. Our findings might help pinpoint a way for employers and policymakers to get closer to this goal more quickly.

McDermott: How does military service have a direct impact on these outcomes?

Werum: What we do know is that there is a relationship between military service and stem outcomes. As social scientists, we try our best to establish causality. It makes more sense to expect that military service – which happens when people are young – shapes, occupational choices, than the other way around. But the ACS data we use here is what we call cross-sectional. That means we don't have longitudinal data over time. It makes it hard to nail down whether military service has what you call a "direct impact." But our analyses do take into account many other factors known to drive career choices. The relationship we found between being a veteran and going into STEM is robust -- no matter how we analyze the data.

McDermott: And you say there's a caveat. Can you tell us about that? 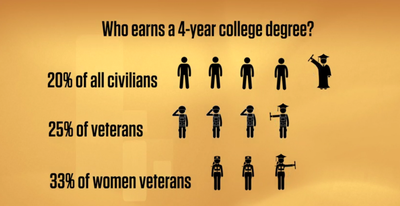 Werum: Well, there's several in addition to the data limitation. What we do know is that to the public generally that stem only means engineers and computer scientists. In fact, STEM is much broader, and many stem occupations do not necessarily require a four-year college degree or more. So how do we decide which fields count? It may seem obvious to include math and physics, biology, computer science, but what about nurses, physicians, high school math teachers, statisticians? So in our study, we use four different STEM definitions; some were narrow and some broader. That 41% boost in STEM degrees for women veterans is based on a STEM definition used by the Department of Defense. Comparing results across STEM definitions suggests that this boost may be partially related to the historically strong concentration of women in the military who serve in medical fields. So that raises a new set of questions: which specific STEM degrees and occupations do veterans pursue after they leave? Do women veterans largely enter female or male-dominated STEM fields? Knowing the answer might help us explain and address persistent gender segregation across fields.

McDermott: And when it comes to the military, is this gendered effect about selection or exposure?

Werum: Another great question and it relates to your earlier one about causality and impact. We can't yet answer this question definitively. What we do know, based on research about STEM recruitment, retention and trajectories for other populations, we think it's likely a combination of both. That is women who select into the military, may already be predisposed towards STEM fields. And even those who are not may discover their talent and interests once they're in the military and have practical experiences and exposure. So this exposure may have a two-pronged effect on both diving into STEM and on staying in STEM. But to answer it conclusively, we need more analyses.