A University of Nebraska-Lincoln English professor says she’s discovering more evidence that Nebraska author Willa Cather’s longtime friend and partner, Edith Lewis, was much more of a collaborator than earlier thought. Melissa Homestead is working on a book about Lewis and her contributions to Cather’s writing and joined Jack Williams of NET news to talk about it.

NET News: First of all, give us a primer on who Edith Lewis was and her connection with Willa Cather and Nebraska.

Melissa Homestead: Well, Edith Lewis was born in Lincoln, Nebraska in 1881. She was raised here in Lincoln and in Kearney and then she moved to New York City after she graduated from college. She was an editor at a magazine and then an advertising copywriter. She and Willa Cather met here in Lincoln in 1903 and they lived together in New York City from 1908 until Cather’s death in 1947. The evidence of the working drafts of Cather’s novels and fiction that we now have make it clear that Edith Lewis was editing Cather’s fictional prose.

NET News: You kind of just touched on this, but in your research, you contend that Lewis and Cather were truly collaborators and that Lewis’ edits sometimes even changed the narrative and direction of Cather’s work. Tell us about that.

Homestead: Well, they’re interesting, just little bits. Say, in Cather’s novel The Professor’s House, Godfrey St. Peter, the professor of the title, is up late at night. In an original draft, he hears factory whistles in the college town he lives in, which isn’t placed anywhere specific, but it seems to be Illinois. And Edith Lewis changed it to the church bells of the local Catholic Church, which then links it to all sorts of other things in the novel. The factory whistles just go away and it becomes linked to other characters and to themes in ways that it wasn’t before. 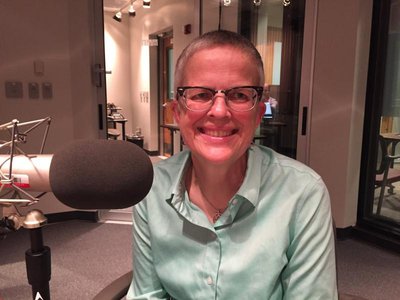 NET News: Why do you think Lewis’ efforts have never been brought to light? Did she want to stay in the background?

Homestead: I think she did kind of want to stay in the background because Cather was a certain kind of artist, a high artist, someone who had distinction. It wouldn’t have been helpful to have someone who was writing advertising copy for Woodbury’s Facial Soap known as your behind-the-scenes collaborator in that context, and I think Edith Lewis understood that. She was somebody who in her own professional practice, when you edit a magazine or when you write advertising copy, your name appears nowhere, so that was something she was used to in her professional practice.

NET News: Do you think this help from Lewis diminishes Cather’s reputation as an author or does it simply help us understand her process a bit more?

Homestead: I don’t think it should diminish her reputation. Certainly no one was all that concerned when the working draft of T.S. Eliot’s long modernist poem The Wasteland was brought to public view and we discovered that his friend Ezra Pound, also a poet, had gone in there and quite extensively marked up the poem and made it into something quite different. So, I don’t have any problem. I don’t think it diminishes Cather’s reputation at all. I do think that women artists are more vulnerable to that kind of diminishment, but I don’t think they should be.

NET News: Was Cather still the driving creative force in this relationship and was Lewis more of a polisher and maybe an editor rather than a true collaborator?

Homestead: We don’t really know about the origination of ideas. We don’t have that evidence necessarily. But I do think that it’s hard to separate the beautiful, polished prose that we know as Cather’s prose from ideas. I think that’s maybe somewhat of a false distinction. I’m certainly not claiming that Lewis wrote the fiction, but it’s also true a lot of the fiction reflects their experiences together. So things they did together are transformed into things that characters do in that way. And then there’s evidence that Lewis was also helping research Cather’s historical fiction. So she has a novel set in 19th century New Mexico, Death Comes For the Archbishop and she also has one set in 17th century Quebec, Shadows on the Rock, and Lewis was involved in both the travel experiences that led Cather to write that fiction and in looking for information and helping Cather to get the materials that she needed to write.

NET News: Did Cather ever refer to Edith Lewis’ help, either in speeches or letters or anything like that?

Homestead: There are some letters where she talks about how important Edith Lewis was to helping her with problems of language, so that’s the only evidence that I’ve found of her saying something directly. For one thing, all of these type-scripts were used by her publishers, so they went to her publishers with someone’s handwriting all over them that was not hers. But that’s also kind of normal. If you talk to any librarians who are custodians of literary manuscripts of all sorts of authors, having somebody else's hand on materials is actually pretty normal.

NET News: Did anything about your research surprise you when it comes to Edith Lewis’ contributions to Cather’s writing?

Homestead: No, I don’t think it really surprised me. It was more finding confirmation of things that I suspected and also finding other materials, not just the editorial materials, but materials documenting their life together that I sort of imagined them backwards for the fiction, and there they were substantiated in other documents.