A new documentary feature film, "The Art Of Dissent", has loads of unearthed propaganda footage from Communist run Czechoslovakia between 1953 and 1989. It focuses on the themes of love, tolerance and intellectualism, 30 years after the Velvet Revolution. The film was directed, written, narrated, filmed and co-edited by James Dean Le Sueur with associate producer, Mariana Čapková.

"The Art Of Dissent" was a co-production with Czech TV and FRMOL in Prague. The executive producer, NUTech Ventures at the University of Nebraska-Lincoln, owns the rights to the film. 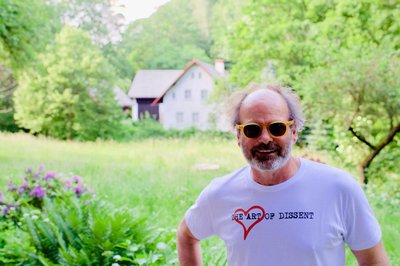 Brandon McDermott, NET News: So the film is called The Art of Dissent and it focuses on the communist control over Czechoslovakia leading up to the Velvet Revolution in 1989. Tell us about why you're putting this film together.

James Le Sueur, film-maker and history professor at UNL: Well, the idea of the film came to me and my partner, Mariana Čapková, about three years ago. What I did was I went to Czech TV, it's the major broadcaster for the Czech Republic. I asked them for permission to begin to work with their archives. What I've done is essentially pulled archives from Czech TV that has given us unparalleled, never-seen-before footage, from behind the Iron Curtain. That's really the beauty of our film.

So we take the film interviews that I was doing in Prague, and other places, we filmed in in England as well and some in the United States, we took those interviews and merged in with the archives. So we have both living testimonials, witnesses to history, but also we have this incredible archival footage. It is, without bragging too much, is the most in- depth look at those archives ever done by any filmmaker in the world.

Listen to three cuts of music from "The Art of Dissent." It features Mark Clinton on piano and Professor Diane Barger on clarinet, as well as Professor Hans Sturm on bass and UNL undergraduate student Claudia Holm on violin.

McDermott: There was a bunch of footage, you're talking 1953 to 1989. Poring over all this footage, what did you see that stood out to you? How do you think it's going to impact viewers? 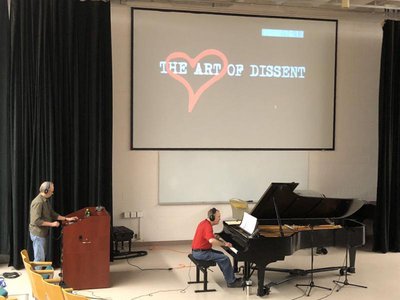 Le Sueur: I think just seeing the film, seeing the footage, is going to impact people because this stuff has really not been seen before, not in a major documentary film.

Our film is going to be almost two hours long. It's conceived as a major feature film, feature documentary film and the archives that we've used for it – many of these things have just not been seen since they were originally broadcast.

Some of them have never been broadcast because of course, some of these are films that the communist state was capturing, like, for example of protesters, we with film of protesters, they didn't broadcast, but they broadcast what we call today “fake TV,” or “fake news.” Which is kind of funny, because you see, we've done that in the movie, we show what they broadcast, and what they actually captured, and they’re not the same films. Because the propaganda of the Communist government and Czechoslovakia was pretty, pretty strong. The TV component of it was pretty essential. 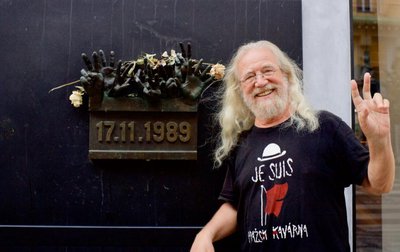 Jaroslav Hutka, a Czech musician, was interviewed by Le Sueur for the film. (Photo by James Le Sueur)

McDermott: You've already alluded to this, but 1968 was an interesting time in America with the assassination of both Martin Luther King Jr. and Robert Kennedy, as well as the Vietnam War, which was ramping up in 1968. Did the Soviet invasion of Czechoslovakia not get as much global attention because of this backdrop?

Le Sueur: I think it got a lot of global attention. One of the problems with the history of Czechoslovakia is that it has a really complicated history. It has both independence after 1918, and then the Nazi occupation during the Second World War, and then a brief moment of liberation, then there was a communist, there are debates on what to call this, some people call it a “coup,” some people call it an election, but the Communists took power in 1948.

So the history of Czechoslovakia seems to go forward fast and backward fast and that's part of the film – where we have a lot of references, direct references to time. 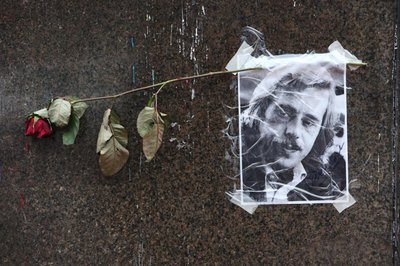 Václav Havel (in photo) was a dissident and former president of the Czech Republic. His role in the Velvet Revolution and leader on the world stage has a central role in the documentary. (Stock photo)

I just pulled this really cool quote of Václav Havel in the Civic forum in 1989, saying “the students have restored time in history to our country.” You know, and this is one of those kind of “goose bump moments,” because that's what they're doing. They're putting time back into Czechoslovakia.

I think that there are lots of comparisons – but of course there are some intentional comparisons that are dropped in, but I'll say I don't mention names, but it’s obvious. But I also think that Americans really do understand this because our independence movement was founded by intellectuals. It's a literary thing.

Le Sueur is currently in Prague editing the final cut of the movie and recording the voice-overs. It's expected to be finished this month. He hopes to enter it in fall film festivals around the world.