If you thought bathroom humor was something exclusive to modern times, think again. That’s what a group of University of Nebraska students found during the excavation of an ancient public restroom earlier this year in a Roman town in what is now southern Turkey. NET’s Jack Williams spoke with UNL art history professor Michael Hoff, who led the excavation, about the find and why is was so unique.

NET News: Give us an idea of the point in time we’re talking about and the setting.

Michael Hoff: It was in a latrine which was located in between two large public structures, so it was meant to be frequented by a number of men at any given time. The date we think is maybe the late third, early fourth centuries.

NET News: What did you find there?

Michael Hoff: We have found up to this point a number of mosaics over the years, but all those mosaics were of images that were geometric or floral in design. This one, however, was figural, so it had human figures on it and nicely placed, so that it had inscriptions, so that we knew exactly what the mythological scenes were. And as we were looking at the images, it became clear that these were not just normal mythological scenes, but rather were riffs or puns upon well-known ancient scenes. We’ve been in the game long enough to be able to recognize the ancient artistic images and we could tell immediately that these were variations on a theme and it became clear that it was meant to be humorous. Considering the fact that we are in a latrine, where you are sitting there doing something that may not necessarily be a pleasant thing, but it’s a natural thing, a normal thing. Back in antiquity, these settings were also considered to be somewhat unnatural and so as a way of trying to propitiate the gods and the spirits who governed the unnatural side of the world, sometimes humor is the best way to kind of keep the spirits at bay and so that’s probably what the origin of the humor in these mosaics was all about. 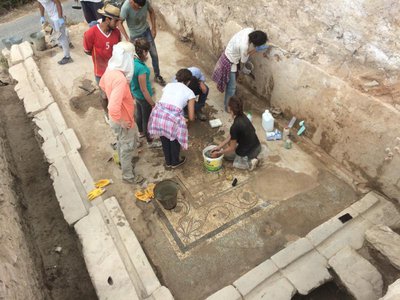 NET News: You’ve done many of these excavations. What made this mosaic different? What made it special? Was it simply the humor involved here?

NET News: What does it say about the quality of these works, that they’ve been there, buried for as long as they have been? Give us an idea of the quality of work here.

Michael Hoff: It’s what we call a high-res mosaic. Mosaics are kind of like pixels, so the larger number of tesserae, which are the little cubes that constitute a mosaic, the larger cubes, you’re not going to get a very high-resolution scene, but the smaller the cube, the finer detail that you’ll achieve and that’s what we have here.

NET News: Your team also found several thousand old coins at this site, but they were from a different period. Where do you think they came from and how did they get there? 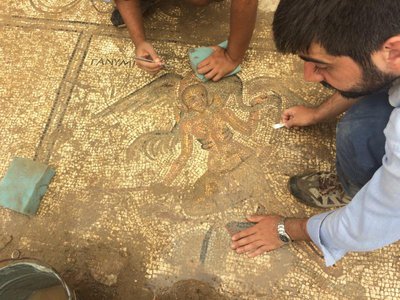 Michael Hoff: The coins that we found were two separate deposits of silver and gold coins, mainly silver coins, over 3000 in number. They probably were in two bags, whether they were cloth or leather, we don’t know. But they were filled with these coins that all seem to date to the early 17th century. This was a time when the Mediterranean coast was being plagued by pirates and it’s very possible that in the 17th century, somebody, maybe a pirate affiliated with these Barbary Coast pirates, brought two bags of booty up to this ruined Roman building, probably with overhanging bushes and trees all around it, but recognize it as a potentially good hiding place for these bags of coins and then bury them underground. And then something happened to this guy and he never came back to reclaim his booty.

NET News: What happens next? There has to be more to uncover at this site. Do you have plans to go back anytime soon?

Michael Hoff: Yes, oh absolutely. We’re going to be going back every year. Imagine an ancient community, the size and area of Wahoo, Nebraska with a squad of Nebraska students coming at it with picks and shovels, so you have some idea about how long it’s going to take to excavate the entire town. It’ll take several centuries.