Trump Campaigns for Reelection in Omaha

President Donald Trump brought his campaign to Omaha Tuesday night, alternating praise for what his administration has done with attacks on Democratic challenger Joe Biden.

The president arrived around 8 p.m. and immediately remarked on the enthusiastic crowd on hand to greet him at the outdoor rally at Omaha’s Eppley Airfield. “That’s a lot of people. That’s -- look at that. That’s incredible. I hope the fake news media is turning their cameras way, way back there,” Trump said.

Trump said he was told the crowd was 29,000, although Omaha police said they had no official estimate. Soon after his speech began, he began tearing into Biden, and the crowd responded with a chant to “Lock him up!”

“If Biden wins, China wins and China will own the U.S.A. If Biden wins he will do bad things. By the way he’s not a good guy, just so you understand,” Trump said.

Trump predicted if Biden wins, he would be eclipsed by more radical Democrats. 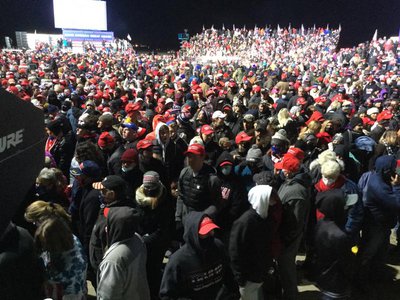 Part of the crowd at Trump rally (Photo by Fred Knapp, NET News)

“They have an extreme agenda. He’s just a vehicle. He’ll be there for about four weeks or so and then you’ll have Kamala – Kamala,” Trump said, mispronouncing the first name of Sen. Kamala Harris, Biden’s running mate, as the crowd booed her name.

Trump also predicted a Biden administration would destroy the suburbs and defund the police, something Biden has said he opposes.

The president praised his administration’s record on agriculture. He said when Ag Secretary Sonny Perdue told him Chinese retaliation for his trade policies cost farmers $28 billion, he turned around, imposed that amount of tariffs on China, and gave the money to farmers.

“Nobody else is going to do that… in fact some people say our farmers do better now than they did when they actually had to farm,” Trump said, with a chuckle.

Reaction to the subsidies has been mixed, with farmers expressing gratitude for the help, but also saying they’d rather get their income from the market rather than government payments.

Trump expressed support for Gov. Pete Ricketts and most of the Nebraska congressional delegation, including Representatives Don Bacon, Jeff Fortenberry and Adrian Smith. He also praised Republican Sen. Deb Fischer, saying “She is my favorite senator from the state of Nebraska, by far.”

Left unmentioned was Sen. Ben Sasse, who recently criticized Trump for cozying up to dictators, among other criticisms.

Trump also accused the media of exaggerating the coronavirus pandemic. “You notice the fake news now, right? All they talk about is COVID, COVID, COVID, COVID, COVID, and we’ve made such progress it’s incredible. Excuse me, I’m here – I’m here,” said the President, who recently recovered from the disease.

And he pointed to the difference between his position speaking on the stage chilly night, and the crowd, which was huddled together, many without masks. “At least you’re down there with each other. I’m up here and the wind is blowing,” Trump said. 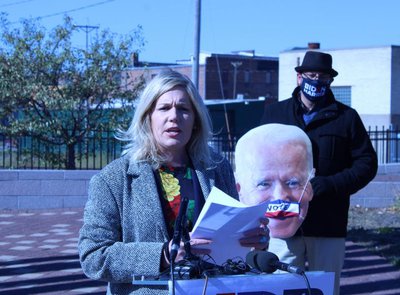 At a news conference earlier in the day, Nebraska Democratic Party Chair Jane Kleeb called the rally a “reckless” event by a “chaotic” president.

“They’re telling everybody just come and get on a shuttle and masks aren’t mandated. I mean, it is a real concern -- not only for us as the public, because now those folks who go to the event will then be out in the public, in our workplaces, our schools, our environment. It’s also risky for press that needs to cover it in order to make sure that you guys are covering the President when he’s here, which is obviously a very big deal. But the president doesn’t care about people,” Kleeb said.

Cases of COVID-19 have been setting record numbers in Omaha and in Nebraska. But at the rally, the president predicted that areas of the Midwest where cases are “heated up” right now would see a drop in cases.

“They’ll go down very quickly They’ll be down within two weeks, they’re figuring. They’ll go down, just like they did in Arizona, Texas, Florida and so many others,” he said.

And Trump predicted a vaccine would be available soon.

“We’re rounding that beautiful turn and it’s going to be very good. The vaccines all going to make it go away a lot faster, and they’re going to be great,” he said.

And he ended with a recitation that, while the electorate will judge, definitely resonated with the friendly crowd.