By Lauryn Higgins, University of Nebraska-Lincoln

A nationwide training program is focused on truck drivers as a means to stop sex trafficking. That training is now taking place in Nebraska.

900 people are purchased for sex every month – and that’s just in Nebraska. Research by Creighton University’s Human Trafficking Initiative finds of those 900 individuals being sold for sex, 70 percent have at least one indicator of being trafficked.

“Anytime someone is being forced into something and they don’t have anything to gain or any type of option out of it, that is human trafficking,” said Lt. Monty Lovelace of the Nebraska State Patrol. 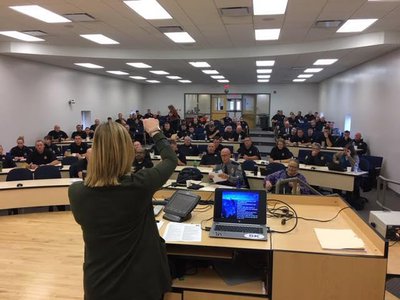 Kylla Lanier, the co-founder of Truckers Against Trafficking, leads a presentation on the non-profit's motor vehicle enforcement training for officers in Iowa. (Photo courtesy Iowa Department of Transportation)

Lovelace is well aware of the signs of what trafficking looks like. He has been working with the Nebraska State Patrol for 18 years and focused on child exploitation cases since 2001.

But his most recent work has been with Truckers Against Trafficking, a non-profit national organization based in Colorado that deals with the issue of sex trafficking. The organization launches its Nebraska chapter this month with a day-long training for all Nebraska State Patrol officers who overlap or work with commercial vehicles in Grand Island.

The group enlists truckers to call out suspicious activity they see and equips them with the necessary tools to do so. Truck stops and their employees have also proven to be valuable partners in the effort to identify and stop sex trafficking.

“The core mission of Truckers Against Trafficking is to educate, equip, empower and mobilize members of the trucking and travel plaza industry and now the busing industry, to recognize the signs of human trafficking and to know what to do when they see it," said Kylla Lanier, the organization's co-founder. "To this end, we have created trucking and busing-specific training videos, wallet cards with red flag indicators of trafficking for each of these industries and steps to take once they suspect it has happened.”

Truck stops are one of many places trafficking is occurring. Spencer Swift, a trucker who has logged over 720,000 miles on the road, much of that time in Nebraska, has been offered sex at truck stops a few times.

“I have seen suspicious activity and been propositioned at a couple of truck stops and a Walmart,” Swift said.

Lovelace says it’s this vulnerability of truckers that traffickers play into. 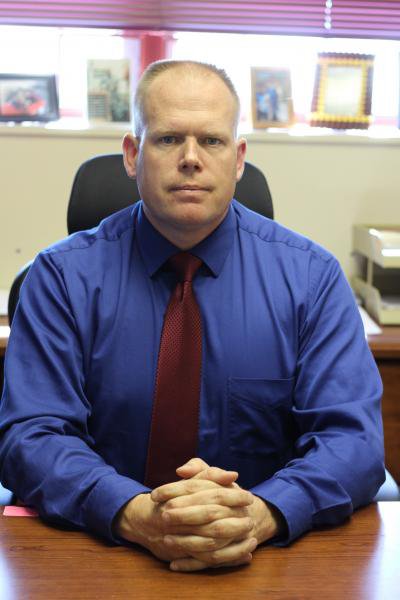 “Traffickers know that they’re out on the road, that they’re by themselves and that they may be lonely or in need of companionship and it makes them a target," Lovelace said. "So, while we like to point out that there are a lot of professional drivers out there that can help us, there’s also drivers out there that are vulnerable and can fall victim to participating, and I’m very careful to say fall victim to, rather to make the choice to engage in illegal sex trade or acts.”

Lovelace says they’ve increased law enforcement operations and the task force is growing to meet the demand, but it’s truckers who are the eyes and ears of the road. They’re able to give them leads and help track down as many victims as possible.

The partnership with Truckers Against Trafficking also works with weigh stations and scale houses in Nebraska to provide them with materials to hand out to any truckers who pass through. This includes small fliers and cards with information that outline specific signs for truckers to look for that show someone might be a victim of trafficking. Lanier has worked with other states to implement this same program.

“This model is basically a list of suggestions or strategies to work with the trucking and busing industries and really close loopholes to human traffickers,” Lanier said.

Nebraska is implementing this model by training all law enforcement officers with sessions starting this month. The training will be led by Lanier and a survivor of sex trafficking who will share her experiences.

“If more drivers, if more law enforcement personnel, more truck stop employees, if more bus drivers, whether that’s school bus drivers, transit bus drivers, motor coach drivers, trucking, if they are equipped to recognize this issue, they’re going to report it, and the more reports that come in, the more investigations can be done, the more victims will be recovered, and perpetrators will be arrested,” Lanier said.

Lovelace knows there is only one way to end trafficking and that is to decrease the demand for it. He also knows it is unlikely to ever happen. Putting in place programs with clear goals and objectives that engage law enforcement and truckers to reduce the number of victims could make a difference, though.

“This fight is a marathon, it’s certainly not a sprint," Lovelace said. "It’s something you can certainly go out and do as much as you can in a day, but it’s more than that, it's ensuring you have long term plans in place that continue to address the issue.”

And the issue ultimately comes down to the victims who are affected by this crime. For Lovelace and Lanier that is what drives them to continue to do the work they do.

“So, that is our hope for the state of Nebraska that you will have less human trafficking," Lanier said. "That you will have more victims getting the recovery and help they need, so they can go on to live lives as survivors and overcomers, and that you would put these traffickers and these buyers of commercial sex behind bars so that they can recognize this is unacceptable in our society.”

Editor's Note: This story was edited slightly to clarify the role truck stops play in the fight against human trafficking.