Exports contributed $6.5 billion dollars to Nebraska’s economy last year. Trade is especially important for the state’s cattle, corn, and soybean farmers. But what does Nebraska have to gain or lose from the Trans-Pacific Partnership free trade deal?

The U.S. is one of 12 nations in the Trans-Pacific Partnership, or TPP. Even though it’s come under fire in the presidential campaign, the White House is still pushing for Congress to approve the trade deal. So is Japanese diplomat, Ken Shimanouchi.

The former Japanese Ambassador to Spain and Brazil has recently been travelling the U.S. to promote trade. In an interview in Omaha following an event at the Omaha Chamber of Commerce, Shimanouchi touted the TPP as the biggest trade deal ever.

“It covers 40 percent of the world’s GDP,” Shimanouchi said. “It’s not just about trade but it covers other areas: intellectual property rights, e-commerce, and state-owned enterprises."

But there has been backlash against the TPP, and not just in the United States. In Japan, agricultural interests have long been protected by high tariffs. The tariff on U.S. beef in Japan stands at 38 percent, but the TPP would bring the tariffs down to around 9 percent over time. That worries Japanese cattle producers.

NPR’s special project A Nation Engaged: listen to NET Radio all week for more stories from NPR about how candidates and voters think about trade. 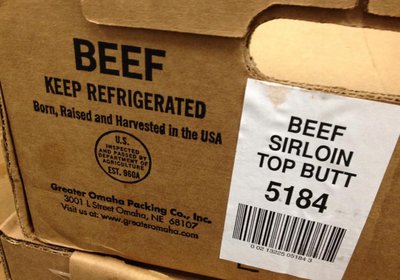 Frozen beef is the top Nebraska export. All of the state’s top export products are related to agriculture. (Photo by Grant Gerlock, NET News)

“Japanese agriculture is not as competitive as U.S. agriculture,” Shimanouchi said. “However, the TPP negotiations have changed the mentality of Japanese farmers. The younger farmers are thinking about exporting high quality Japanese products overseas."

“In all the parties to the agreement there’s unhappiness about certain parts of the agreement, but overall it’s beneficial for everybody,” he said.

One remaining question about the TPP is where China fits in. The nation with the world’s second-largest economy is not a party to the trade agreement, and the U.S. and other nations have long complained about competing against state-subsidized companies and against Chinese currency manipulation.

Shimanouchi says the trade agreement would be better with China on board, but if that doesn’t happen, the United States and Japan should set the trade agenda with their own agreement.

“Both the United States and Japan have to ratify the TPP for it to come into effect,” Shimanouchi said. “If either side does not approve it, that’s it. And it would be extremely unfortunate because as I say, somebody else will jump with joy and start writing the rules in a language other than English."

Beef is the state’s top export, followed by soybeans, corn, and farm machinery. No wonder, then, that the TPP has support from farm commodity groups like the Nebraska Corn Growers and Nebraska Cattlemen.

But not all farm groups are pro-TPP. Nebraska Farmers Union president, John Hansen, says even with more free trade agreements in place the U.S. still had a $540 billion trade deficit last year.

Trade balance is important for commodities like beef, Hansen says. The TPP would also decrease U.S. tariffs on imported beef. If that led to an increase in beef imports from countries like Australia, it would have a negative impact on prices for American farmers.

“It’s like the baseball player who brags about how many runs they’ve scored, notwithstanding the fact that the other team has scored substantially more runs and that’s why you lose game after game,” Hansen said. “In fact, we have a more positive balance of trade with countries that we do not have a trade agreement with. We’d be better off if we did nothing than we did something that’s destructive.”

It looks more and more likely that nothing will happen with the TPP at least until after the election in November.

Nebraska’s Congressional delegation voted in June 2015 to allow the Obama administration to finalize the TPP (Senate vote, House vote). But now it needs to be ratified by Congress to take effect. And since the final details of the agreement came out, none of Nebraska’s representatives has publicly come out in support of the deal.