The entire state of Nebraska is in some form of drought right now, with 90% of land moderately dry or worse.

Some farmers have taken to social media to document their withering crops and pastures. Researchers at the University of Nebraska's National Drought Mitigation Center say those kinds of tweets could be used to detect drought and its impacts on communities.

Kelly Helm Smith has been working at the center since it opened in 1995. At the time, scientists tracked drought by using clipping services to collect envelopes of newspaper articles, poring through them for stories of dry fields. After the arrival of social media platforms like Twitter, curious searches for #drought started to become fruitful.

"It started to seem like almost an extension of scanning news stories, you know, 'Let's see what people are saying about drought,'" she explained. "It's a whole different ballgame with all this stuff coming from kind of the grassroots level ... anybody can publish anything. The world has changed a lot."

Now her team is looking to fine-tune a method for using Tweets to track emerging drought patterns in real time. From 2017 to 2018, they collected small batches of posts and analyzed them to see how people were documenting their concerns. 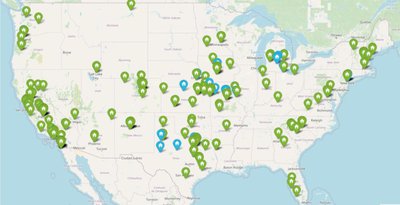 This map features tweets using the hashtag #drought from across the country in July of 2018 and sent to agencies across the country. "Blue markers are tweets that used #drought18, a hashtag used by a higher proportion of agricultural producers than the rest of the tweets," researchers wrote.

"For each state, we got a sense of what their normal rate of tweeting about drought is, and we factored in how much drought they were actually experiencing, and also what the news coverage of drought was," she said. "And then we kind of looked at the unaccounted for part of that conversation."

The results suggested there's much to be learned from how people respond online to dry conditions, and what their needs are.

“Looking at groups of tweets about drought grouped by state kind of lets you tune into the different conversations that people are having in different places," she explained. "You know, in Iowa, they may be talking more about corn. In Nebraska, they're talking about corn and soy and cattle in Montana is a little more cattle. In other places like New Mexico, it might be water supply."

In Florida, residents in dryer areas were firing off tweets about how a lack of rain might impact the behavior of local alligators.

Part of developing the method means weeding out disinformation and tweets using the phrase "drought" when they’re really talking about other things. To a degree, the team is already doing that privately and sharing among water and drought management agencies nationwide.

"It ends up being a tool for the people in a, in a particular locality, one more thing for them to look at," Helm Smith said. "Because really, local interpretation is very important."

We could someday see a public database of drought updates, penned by communities across the country. The data could also lead to a sharper drought warning system.

"To be able to do larger searches without using the word 'drought' and not the hashtag 'drought', and related terms like dry field, crunchy corn, all those kinds of things that you would look for in a larger search, then we would be able to make publicly visible maps," she said.

Findings from the team's pilot project were recently published in The Bulletin of The American Meteorological Society.