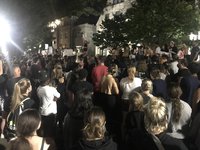 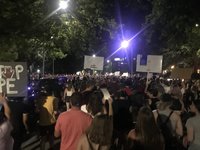 For the third night in a row, protestors lined the streets and sidewalks outside of University of Nebraska-Lincoln’s Phi Gamma Delta, or Fiji Fraternity. The protest is about a sexual assault reported at their house early Tuesday morning.

“I was ashamed to be a part of this campus knowing Chancellor (Ronnie) Green isn’t doing anything about it,” he said. “I mean, they shut it down temporarily, but that’s not all that needs to happen, so ashamed is probably the first thing that I felt.”

“There’s such a thing like a rape counselor,” she said. “Someone that helps you deal with it, and stands by your side as you deal with the whole process. I think we should have more of those that are paid for by the university and not from the survivors themselves.”

The investigation involves a 17-year-old female and a 19-year-old male, and UNL’s Police Department has confirmed the accused is a member of Fiji. The department won’t release either name to protect the ongoing investigation. UNL PD said their role is limited to finding facts and presenting cases to county attorneys.

The department urged people to be patient with the investigation.

Fiji was temporarily suspended from campus on Wednesday, August 25. The move follows the fraternity's suspension in 2017 from the university and Interfraternity Council, for charges relating to sexually harassing comments during a women’s march and repeated behavior violating the student code of conduct.

Chancellor Ronnie Green released a video addressing the alleged sexual assault reported to the university. Additionally, he released his second statement on the situation to the student body late Thursday afternoon.

To our students, faculty and staff:

"Sexual assault is heinous and should never happen. I wish we lived in a world where it didn’t.

We have taken a number of steps on our campus to prevent sexual assault, to help ensure victims feel comfortable coming forward, to support survivors and to investigate and address allegations of sexual misconduct.

This week, sexual assaults were reported to our UNL Police Department. And they immediately began investigating each of them. My heart breaks at the thought of any young person facing that trauma at the beginning of their collegiate experience, or at any time they are a member of our UNL family.

I know that our UNL Police Chief, Hassan Ramzah, also takes this very seriously and uses a trauma-informed approach in working with the victims and thoroughly investigating each case as he’s doing right now.

We all wish that resolution of these cases could come swiftly. But often, it’s not as simple as “locking them up.” The guarantee of due process is part of our Constitution and core to who we are as Americans.

Our law enforcement officials, our Title IX officials, are bound by clear legal guidance and process. As a university, we have a responsibility to follow that defined process and protect the rights of all involved — even while we move as quickly as we can.

And I know that the end of that legal process sometimes just doesn’t feel like justice. I get that. I understand many of you are angry. I’m angry too.

We will always work harder and to do better to help prevent sexual assault. And I hope all of you will as well. If you see something, say something. Stick together. Be safe. Take care of one another.

And if you’re a young man who somehow thinks this is cool — think again. It is unacceptable. No means no. And if you violate that, and we can prove it — you have no place on our campus.

This message includes safety and victim resources available to our UNL community. Please make sure you are aware of all of the safety measures available to you. And if you are a victim of sexual assault or harassment, there are people here to help you.

Protestors echo a message to ban the fraternity from UNL’s campus forever, which has led to a petition with more than 260,000 signatures as of late Thursday evening. The petition can be found here.

Many people have taken to social media to express their distaste for the situation.

TW// Max Helm, a Fiji at the University of Nebraska-Lincoln, r*ped and assaulted a 17 year old girl and left her on the lawn. There is a case building against him and she was examined at the hospital and found roofies and torn areas of her body. DO NOT LET THIS BE FORGOTTEN!

// rape , sexual assault
Last night, a woman was raped at a University of Nebraska Lincoln frat party by Max Helm, a member of FIJI, a frat known to rape and sexually assault women, as far as leaving them naked & bloody on the lawn. The frat was suspended in 2017 for similar 1/?