Diabetes and pre-diabetes impacts more than 600,000 Nebraskans. This so called “hidden crisis” is the focus of two new programs on NET Television: the PBS special “Blood Sugar Rising” and “Beating Diabetes,” which looks at diabetes in Nebraska. In this NET News Signature Story, part of the "Beating Diabetes" program, NET producer Mike Tobias looks at the battle against diabetes in our state.

Fifteen years ago Stephanie Schriner of Grand Island was a marathon runner recovering from an accident. Her doctor told her she had another problem. Diabetes.

“It really runs in my family on both sides so it wasn't a big shock there,” Schriner said. “You can pick your friends but you can't pick your genes.” 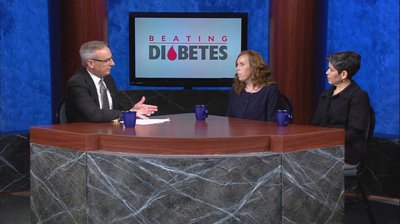 A lot of Nebraskans are living with diabetes. About 11 percent of our population, 175,000 people, have diabetes. Another 36 percent have pre-diabetes, with higher-than-normal blood sugar levels. Most, more than 90 percent, have Type 2 diabetes. And Type 2 is the focus of this story, the type of diabetes that tends to happen later in life and is related to diet and lifestyle: modifiable risk factors.

“Emphasizing lifestyle changes. So what you eat, physical activity,” said Virginia Chaidez, an assistant professor with the University of Nebraska-Lincoln College of Education and Human Sciences. “Those types of things are definitely things that we have some control over, so we can modify those things to decrease our risk.”

First, activity. Emily Knezevich is a certified diabetes educator and associate professor with Creighton University’s School of Pharmacy and Health Professions. She said 150 minutes of exercise weekly is recommended. But if that’s not possible, just try and move more.

“Any type of movement, parking at the end of the parking lot when you go into the grocery store, taking the stairs instead of the elevator,” Knezevich said. “Those are all just easy things to move a little bit more, burn a little bit more calories and help towards your weight loss goals.”

On a weekday afternoon we caught up with middle and high school kids logging miles on a Fremont bike path. They’re taking part in an afterschool program called “R-U-N,” with a running component called Marathon Kids. Exercise, nutrition education and more.

Running the program, and with the kids twice a week is Beth Nacke. “This is a really important time to start developing those lifetime habits of healthy eating and regular physical activity,” said Nacke, a UNL Extension educator in Dodge County. “We may not be able to prevent it altogether. Diabetes may be developing down the road, but we can certainly delay it if we can adopt those healthy lifestyle behaviors.”

As for diet, experts say read labels, don’t drink your calories and make small, sustainable changes. “We hear a lot about low carb, no carb diets,” Knezevich said. “I think it'd be hard to commit your life the rest of your life with no carbs. So you need to think about something that you can do over the long run. It's a marathon, not a sprint.”

Ponca Tribe of Nebraska Registered Dietitian Sara Pfeifer holds Diabetes Awareness Month lunch-and-learns. We dropped in on one for a dozen or so tribe members in Niobrara meeting room. There’s education, health screenings exercise and a demonstration on how to make “Three Sisters Mash.” A recipe from a Native American cuisine cookbook, it features corn, beans and squash. A recipe that’s part of her bigger message about healthy eating.

It’s important information for Pfeifer’s audience. Diabetes is twice as common for Native Americans. One of a number of populations nationally and in Nebraska where diabetes is more frequent.

“African Americans, Hispanics, Native Americans. We see higher rates there,” Chaidez said. We also see an association with poverty, lower education, lower income. So these things are going to create barriers for having free time to do things that would improve their health.”

“After having eaten a certain way for all of your life and then trying to eat more healthy. That's always a hard one for everybody. Everybody that has it,” said Gloria Hamilton from Niobrara. We met her at the Ponca Tribe lunch-and-learn.

“It's pretty tough. It's pretty tough,” Schriner said. “When I was in denial, my answer would be, ‘It's nothing.’ But now that I really understand it or I'm starting to understand it, and I realize this is for the rest of my life, I've got to do this and that makes it, it can be depressing. It can be a downer. There's no cure for it. You just have to learn to live with it.”