How does a small town not just survive, but thrive? Ord started taking an innovative approach a couple decades ago. That approach is featured in NET Television’s new series on innovation and creativity, “What If…” produced and hosted by Mike Tobias.

This story is part of the new NET Television series on innovation and creativity in Nebraska, "What If..." It premieres Thursday, June 13 at 8 and 8:30 pm CT on NET. You can watch stories and learn more about the project at netNebraska.org/WhatIf.

Watch the "What If..." story on Ord economic development on the NET web site or NET YouTube channel 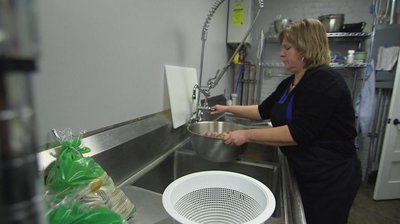 Melanie Boden works in the kitchen of her business, Jubilee Catering (All images by Justin Cheney, NET) 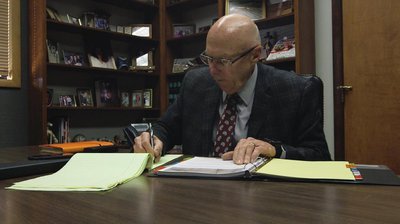 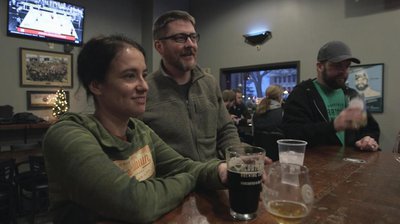 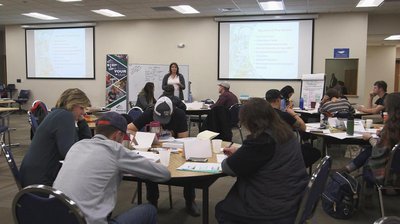 Alone one morning in her catering business kitchen, Melanie Boden cleans, seasons and puts large pans of small potatoes into commercial ovens. “This is one of my favorite recipes to do,” she explained, “because it is very, very simple and so tasty. People just love these potatoes.”

This is a story about Boden’s roasted potatoes. Beer. Leadership training. A lawyer. And how all this helps a small rural town thrive and survive.

First, the town. Ord sits on the east edge of Nebraska’s Sandhills. A couple thousand people live here. One is Bob Stowell. Stowell was born just east of Ord. He left for the U.S. Military Academy at West Point, the Vietnam War and law school. He came back in 1972 to practice law, and because this is where he and his wife wanted to raise a family. A path few others were following in Ord and other small, rural towns.

“As we went through the mid-80s ag crisis lot of people really suffered financially and in the 90s we had a lot of people leaving the community because they were looking for some place to where they could make a better living and could thrive,” Stowell said.

Stowell puts it bluntly. Ord was hemorrhaging people two decades ago. But he was determined to stop the bleeding. Stowell started getting people together, getting organized. They raised money. Got grants. Got a local sales tax passed. Hired a full-time economic development director.

But the most innovative thing they did might be the Synovation Valley Leadership Academy.

Seated at round conference room tables, a dozen or so participants are talking about time management. A few years ago Stowell and others brought in leadership coach Denise Poskas, Dr. Dee for short. The goal? Develop a program from scratch customized for the Ord area. The result was leadership training with a heavy dose of personal growth.

“We designed a leadership program that fit what we needed and is based primarily on personal growth,” Stowell said.

In five years about 120 people have done some or all of the four levels of this nine-month program. In Ord’s school it’s required for eighth graders and a high school elective. Stowell’s law office uses it. A local construction company sends all of its employees. It’s a big part of Ord’s culture. But how does leadership and personal growth training translate to economic development?

“The way that I look at it is it's all about inner growth so that you can have positive ripple effects in your life, your family, and your community with that, too,” said Melani Hagge, an Ord native, UNL law school student and Synovation Valley Leadership Academy participant.

“You have to have leaders that will step into new roles. They'll perhaps see themselves with more courage. Self-confidence,” Stowell said. “Leadership is, I believe, the beginning of everything in terms of sustaining rural communities and certainly any community.”

So back to Melanie Boden’s kitchen, where she’s dicing bacon. Boden used to be a nurse. A safe job that paid the bills. Then Ord started leadership training. Boden signed up for the first class.

“As a piece of that class, we did a lot of soul-searching, and thinking about the things that really got us excited,” Boden recalled. “Cooking for people was something that I just kept coming back to.”

Jubilee Catering was born. She’s working on just a few hours sleep this day, prepping for two events. With no regrets. “I really enjoy pleasing people. I enjoy people liking what I do, and I like feeding them,” she said.

“Out of this program we see many more entrepreneurs which is powerful,” Poskas said.

Stowell talks about other signs all the things Ord is doing is working. School enrollment is up. City property values are going up because of new development. Family income is up. The number of people in their early 30s is increasing.

“There's all sorts of new businesses and stuff going up all the time and they were starting to get quite a few more younger families coming back in the area now,” said Orrin Petska, Ord agribusinessman and Synovation Valley Leadership Academy participant.

Which brings us to beer and Scratchtown Brewing Company’s taproom on Ord’s town square. Caleb Pollard moved to Ord a decade ago, recruited by Stowell to be the town’s economic development director. Part of the package was a job for Caleb’s wife at the hospital.

“We were looking for communities that had an ‘it’ element, and that ‘it’ being signs of progressive attitude and forward thinking to community survival, first and foremost,” Pollard said.

Pollard caught the entrepreneurship bug helping other businesses get started. Already making beer, he connected with another home brewer who had returned to Ord and a third partner with sales experience. Together they created Scratchtown Brewing Company.

“I wanted to take my love of brewing and my love of fermentables and my interest in starting a company and do it here in Ord,” Pollard said, “and do it in a way that was both meaningful as well as maybe a little bit of a leading edge in an industry that was not out here until we started Scratchtown.”

Pollard said they looked at expanding into other communities, but instead decided to “double down” on what they’re doing in Ord. Because of what’s happening here. As Pollard put it, Ord changed its future when they decided to do something about it.

“I think that active attitude towards self-determination has had a lasting 20-year impact on this community that is very hard to find anywhere else in the state,” Pollard said.