The Nebraska Boat Builder Who “Won the War for Us”

The Higgins Boat replica being packed at Behlen Manufacturing in Columbus for shipment to France. (Photo by Mike Tobias, NET News)
After landing in a Higgins Boat, soldiers wade toward a beach on D-Day. (Department of Defense photo)
Workers build a Higgins Boat in a Higgins Industries plant in New Orleans. (Library of Congress photo) 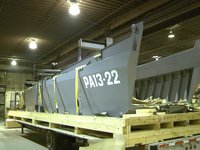 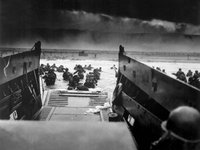 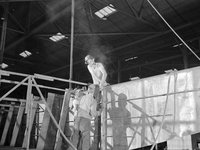 A Nebraska native, and the boats he built for the military, was honored June 6, 2015 on the anniversary of D-Day, with a new memorial on the beaches of Normandy, France. Andrew Jackson Higgins was an unlikely war hero. 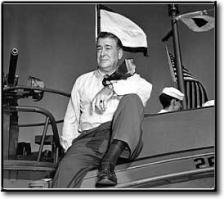 VIDEO: Watch a video segment on Andrew Jackson Higgins and the new Higgins Boat memorial in France, from the June 2015 episode of NET's "Nebraska Stories," which premieres June 19 at 7 pm CT on NET Television. 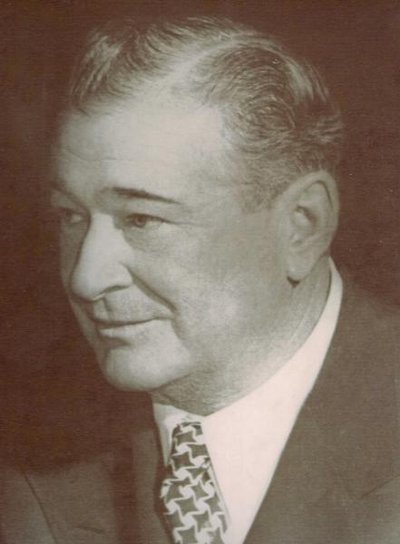 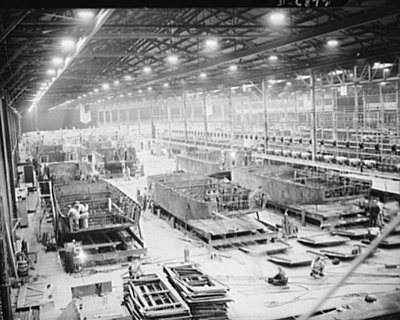 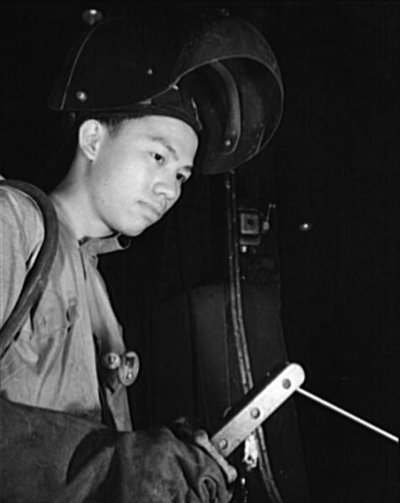 A welder, described as an American of Chinese origin, helps build a Higgins Boat. "Higgins hired thousands and thousands of people. Didn't care what the skin color was," says historian Jerry Meyer. (Library of Congress photo) 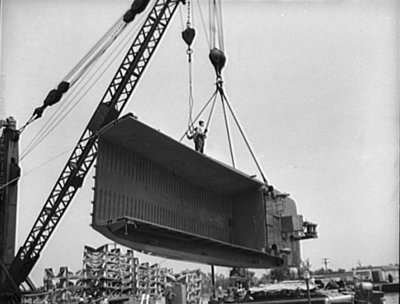 A finished Higgins Boat is loaded for railroad shipment. (Library of Congress photo) 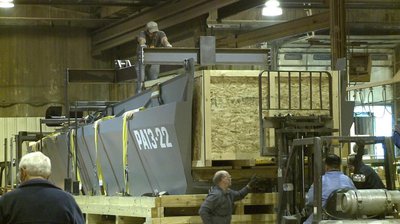 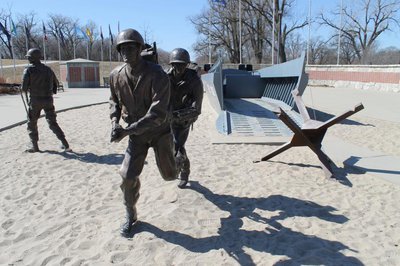 The Higgins Boat Memorial in Columbus, which is similar to what is being dedicated in France. (Photo by Mike Tobias, NET News)

Platte County Museum site on Higgins and the memorial in Columbus

More than 100,000 soldiers landed on the beaches of Normandy, France on D-Day, June 6, 1944. Most scrambling ashore from LCVPs, military jargon for landing craft vehicle, personnel. Those long, flat boats with doors on the front that fold down. Later Gen. Dwight Eisenhower said these boats and their builder “won the war for us.” That shipbuilder was Columbus, Nebraska native Andrew Jackson Higgins.

“If he hadn’t designed and built those LCVPs, those Higgins Boats, we couldn’t have gone over an open beach. The whole strategy of the war would have been different,” historian Jerry Meyer said.

Meyer is the Nebraska National Guard’s historian. But it was when he was teaching history at Columbus High School that he first started doing research on Higgins. What started as a project for his students eventually led to the Higgins Memorial in a Columbus park.

Meyer calls Higgins “an interesting character.” A youth from Columbus, then Omaha who was part entrepreneur, part problem child. He left or was kicked out of four schools, never graduating from high school. After a stint in the Nebraska Army Guard, Higgins moved to the Gulf Coast, eventually starting a lumber business in New Orleans in the 1920s. For this, he needed boats to get wood out of shallow water swamps; thus, the genesis of the Higgins Boat.

“He doesn’t have an engineering background, but yet he can see things,” Meyer said. “He would wake up in the middle of the night, sketch something, and then in the morning he would give his architects or engineers a plan and say, ‘make this happen.’ He’s a lead, follow or get out the way type of person. I’ve seen students like that. They may not always be book smart but boy they can make things happen, and I think that was Mr. Higgins essence.”

By the time the United States entered World War II in 1941, boat building had become Higgins’ primary business and he was already making them for the military. He quickly expanded and created massive factories to support the war effort.

“The assembly lines were working 24-7. The whole floor was moving,” Meyer said. “None of his plants were on water either, so when the boats went out the end they went onto a rail car and they rode the rails down to the industrial canal or Lake Pontchartrain, and they would spray paint them as they were going down the rail. It was all about efficiency of operation and Mr. Higgins was on a grand scale.

“It wasn’t about making money, it was about investing it back into the people,” Meyer added. “Because if you look at Higgins’ work force, you have men and women, blacks, whites, paid by their skill level. If you have a skill level 5 welder (who is) a woman, (she) gets paid higher than a skill level 3 male welder. Almost scandalous in the ‘40s what he did. But he took care of his people. He built hospitals, he built schools, he built housing for them. To make that many boats in really four years of the war, that’s astronomical what they did.”

“That many” was more than 20,000 military boats, mostly the famous landing craft. Two more Higgins Boats were built after their creator died in 1952. One replica for the memorial in Columbus, a display that includes statues of three soldiers charging from the boat, and another statue of Higgins.

Earlier this year, a second Higgins Boat replica was shipped to France. Higgins and his boats will be honored at one of the places where they made a difference, Normandy’s Utah Beach. Packing this display at Behlen Manufacturing in Columbus for shipment to France and dedication on the anniversary of D-Day wasn’t easy. Neither is raising money for this memorial, similar to what’s already in Columbus. But members of the Columbus committee behind this effort said it’s worth the effort.

“I think it’s both the opportunity to honor a native son in Andrew Jackson Higgins, but it’s also even more important to be able to honor the veterans from World War II,” said Columbus businessman Dennis Hirschbrunner, one of the Higgins Memorial committee members.

“I think the most important thing is if Higgins hadn’t of been born here, and his family hadn’t lived in Nebraska, they thought maybe he would have different values or he’d ended up doing something else,” said sculptor Fred Hoppe, creator of the statues that are part of memorials in Columbus and France. “And just the way this thing ties back to Columbus, it just has special meaning for everybody involved.”

The story of Andrew Jackson Higgins also has special meaning for Meyer, who has spent years studying and then giving presentations on the boat maker.

“His whole story is just one big story of doing what he loved for his country, and I think that’s what makes him really kind of a bigger than life character to me,” Meyer said. “He put everything on the line for this country and now today we’re just really discovering what he did. He was global and to think that his boats were used in all theaters of war, all amphibious operations used them. And he was a household name. Back in the 1940s, during World War II, everybody knew who Higgins was.”

Now visitors to one of the great battlefields of World War II, Normandy Beach in France, will also be able to discover Higgins, and the impact his boats had on D-Day.

On the night of June 6, 1944, President Roosevelt came on the radio to tell Americans that the greatest battle of their time had begun. He led our country in prayer. America held her breath and her people lifted their eyes to heaven for those who were hitting these beaches, an ocean away.

Along this coastline, the future of civilization hung in the balance. Young soldiers were given the assignment to land in the face of a ruthless, well-trained Nazi enemy. As their Higgins boats opened, machine guns fired and mortars fell from well-concealed German bunkers. Some soldiers drowned before making it ashore. Others died instantly in the hail of gunfire. As General Omar Bradley said, “Six hours after landing we had ten yards of beach.” But somehow, inch by inch, these brave young men, fighting through the storm of bullets, managed to secure the beachheads.

Last year I was privileged to represent America at the 70th anniversary of the great battle. President Obama and President Holland spoke movingly about what D-Day meant and continues to mean. As President Holland said, “France will never forget.” A number of veterans made it to the ceremony. Most were over 90—and all in good cheer. One of them said to me, “I haven’t been here in 70 years. Much better reception this time!”

Something else happened to me while I was last here. I met a historian, a retired officer in the British military, Major Timothy Kilvert-Jones. He gave an extraordinary overview of D-Day with an absolute command of the details of the battle. I was so impressed with the major’s speech that I invited him to Nebraska last summer to give a presentation to our community. While in Columbus, Nebraska, we visited the Andrew Jackson Higgins World War II Memorial at the entrance of that community. When he saw the Higgins Boat and the statue of the troops, Major Kilvert-Jones simply said, “This belongs on Utah Beach.”

Back home, the original monument was the idea of high school kids: students in Mr. Jerry Meyer’s Columbus High School social studies class. I want to thank all those noble, hardworking people of Nebraska who I represent in the United States Congress. And I want to thank Major Kilvert-Jones for recognizing the meaning of this monument and conceiving the idea of it on Utah Beach.

I think this effort is worthy of the World War II generation—the Greatest Generation, as we call them today. We reflect fondly and appropriately on that great generation. We admire their courage. We are nostalgic for their values. We want what they had: purpose, determination, and a can-do spirit.

So, let’s do it again. Let’s attack the disquiet that is affecting so many of our countries. We live in an age of deep anxiety. We long to rediscover our narrative, to recover the source of our strength. If we retranslate the ideals of the Greatest Generation for our time, perhaps we can reclaim that legacy.

Chaos and disorder are not inevitable in this century. Let’s defeat them, along with the imperialism of despair. As members of the community of responsible nations, let’s elevate the values of courage, compassion, and commitment. As we reflect on the agony and pain of war, let’s not be afraid of grace and beauty—goodness and truth. Given the complexities of our time, perhaps we must become the “next” great generation.