The Music Never Stops for Bobby Layne and His Orchestra

Two by two, couples glide across the dance floor at the Pla Mor Ballroom in Lincoln. Most have been here before, sometimes decades before. The music sounds familiar because the Bobby Layne Orchestra has been playing here for decades as well.

Bobby Layne has spent a lifetime traveling the country and beyond making music. He does it with style. He puts on his bow tie and jacket, and leads his orchestra on a musical journey to places like New York, New York and Tuxedo Junction. 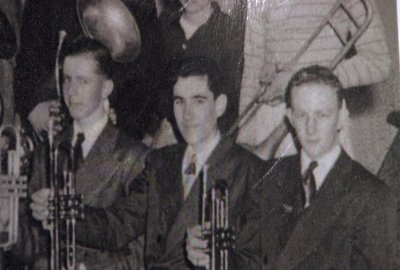 "Every town had a ballroom that was the social gathering place," Layne said. "They did everything there, weddings, anniversaries, funerals, so forth."

For 65 years, Bobby Layne has been leading the orchestra that bears his name in those ballrooms all across Nebraska.

"We had one at Utica, Nebraska, which called the Flying V Ballroom. It was big," Layne said. "Gosh, the Turnpike here in this town was so beautiful. Peony Park in Omaha, Nebraska. That was so elegant. If you took your date there you had to wear a coat and a tie or they wouldn’t let you in. Very classy."

Layne’s musical career started with playing the trumpet at Waverly High School. He’also learned the saxophone. After playing in the 43rd Army Band for six years, he returned to Nebraska, ready, in his words, to “get serious” about his music. Getting bookings for his new young band, though, proved difficult. 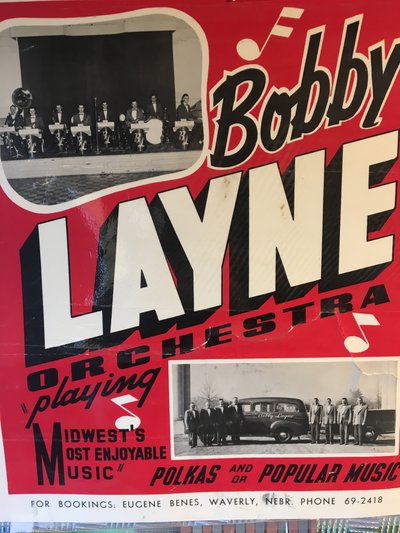 A poster with photos of the Bobby Layne Orchestra promotes an upcoming show. (Photo by Dennis Kellogg, NET News)

"You come there and they’d say, “Come back when you grow up,” but I did grow up and things just kept getting better. You had to prove yourself," Layne said.

They did that. Soon, they weren’t just playing Nebraska ballrooms, but shows from coast to coast, sometimes 15 to 20 nights a month. They shared the stage with greats like Tony Bennett and Bob Hope.

"We were the backup band for all of the Lawrence Welk stars on the road," Layne said. "We would do shows, play their music."

The orchestra may have Layne’s name on it, but many others also help create their smooth sound. Trudy DuMay has been the lead singer on thousands of songs during her more than four decades beside Layne. And many of those in the band have been making music together for years.

"I’ve been surrounded by wonderful musicians," Layne said. "You become a family because you’re traveling together and working together. Gee whiz, I don’t know how many musicians we’ve had through the years, but we still keep in touch. It’s a wonderful thing."

You’ll recognize plenty of songs from the big band era, but the orchestra actually plays a variety of music.

"We do everything from Brown-Eyed Girl to Glen Miller’s In The Mood," Layne said. "Memories from the Broadway show Cats is one of my favorites. There’s a lot of good, classy stuff out there now that we enjoy playing." 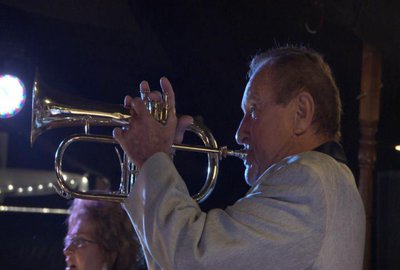 Bobby Layne has learned to play the trumpet and saxophone and also sings during performances. (Image by NET)

You can tell Layne enjoys what he does, but as a bandleader, he also takes his job seriously…

"You have to make sure things are sounding right. If everybody’s out of tune or if somebody’s too loud, it’s your job as a bandleader to control the sound that you’re getting. And when everything is just right, it feels good," Layne said.

Layne knows what he’s talking about. He’s been named the national bandleader of the year. And he’s among the longest-serving bandleaders in the country. He’s 85 years old, and can’t wait until the next time he gets to take the stage and play his music.

"It gets in your blood. You’re at home, you’re thinking of a song that you like, and you miss getting the sax out and playing your part on it. It’s in your blood, and you enjoy it," Layne said.

Layne’s career is like a favorite song you never want to end, and he doesn’t plan on ending it anytime soon…

Watch this "Nebraska Stories" feature on the Bobby Layne Orchestra:

Editor's Note: This story is part of our "Best of 2019" Signature Story report. The story originally aired and was published in February.