The Goofy Fun of Cosplay Balances Deeper Themes for Nebraskans 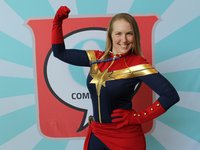 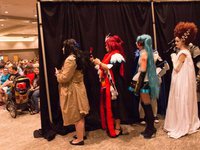 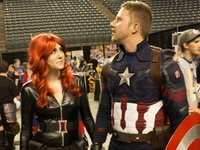 There's a bizarre sense you've been transported into a three-dimensional comic book after spending just a few minutes walking around Omaha’s ComicCon. It’s a mash-up of pop culture look-a-likes. 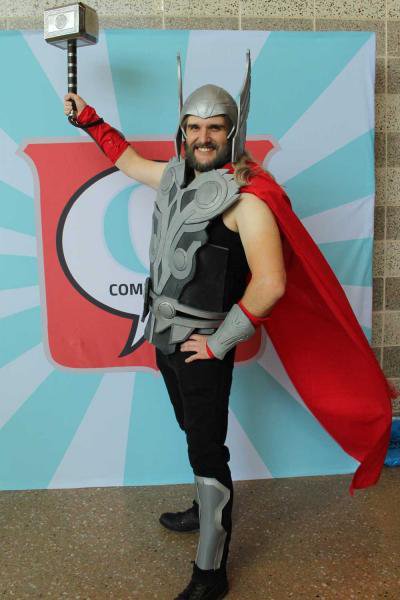 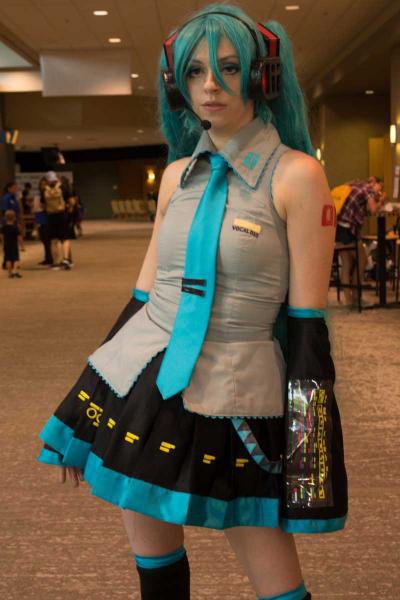 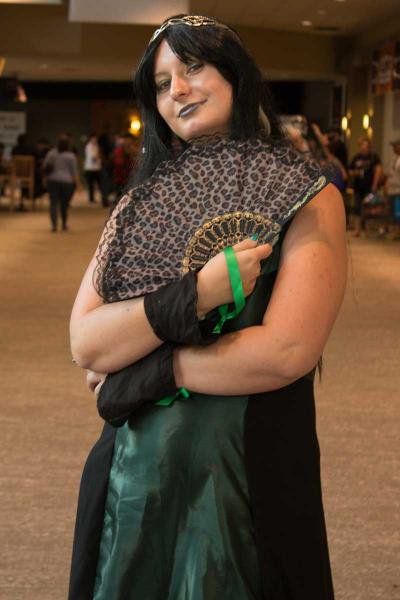 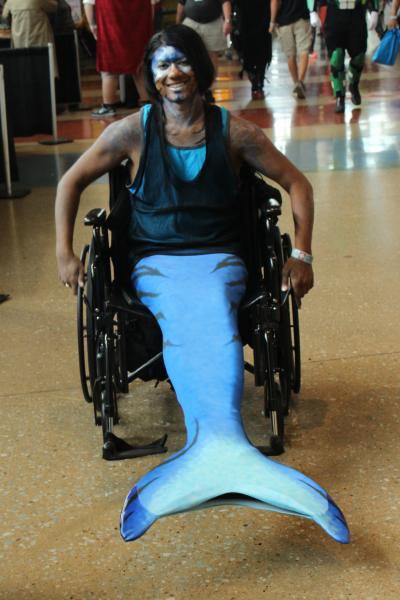 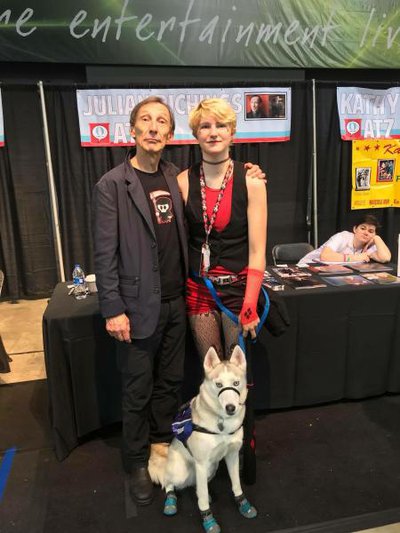 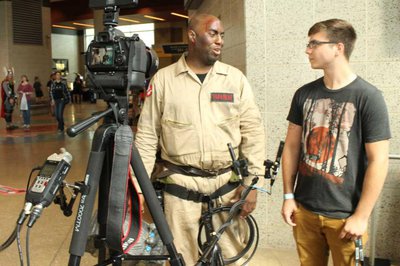 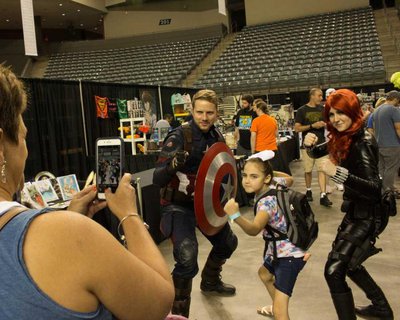 Kylie in her "superhero pose" with Brandon Wolfe and Natalie Hatfield.

The bearded bulked out Thor, brought to life by craft beer barkeep Mark Davis, wields a convincing silver hammer. (It has its own name: Mjölnir.)

There’s a female version of the shape-shifting Loki, a few Wonder Women, Harry Potters, and the entire back catalog of Batman villains.

Participants and visitors find an especially welcome sense of inclusion at these events.

“Whether I am in cosplay or out of cosplay, I know I belong,” explained Harley Wallace (in the role of DC Comics villainess Harley Quinn). “I don’t have to worry about people judging me for being weird because everyone else is doing it too!”

Cosplay, participants will tell you, goes beyond costume party dress-up to a form of performance art. Blending the nerdiest of hobbies…comic books, model-making, Japanese animation and theater arts…created a distinctive and even hip mixture.

“I think people finally realized super-heroes are cool. Anime is cool,” “Papa Bear” English said. “There are so many of us now that we can’t be contained. The nerds are taking over!”

A steady stream of fans made their way to his booth on the convention floor getting selfies with a star in the cosplay world. Dressed tamely in a brown Ghostbusters jumpsuit today, English said he was hooked after attending his first event, taken in by the level of creativity and craftsmanship shown by role players.

Embracing “the creative process of it, trying to make that living 3-D art” he built a second career out of designing striking hand-crafted costumes. Now he travels as a featured guest at “cons” around the country.

Moderating a panel earlier in the day on diversity, he said his message was “be inclusive. Don’t try and gate-keep and keep people out because they don’t look a certain way or they don’t fit a specific mold.”

The topic resonates with him because he knows many have a mental image of a typical cos-play participant and it would not be his look.

He’s an African-American with the build of a defensive end.

“The whole point of cosplay is to express yourself the way you see fit,” English explained. “When we get into things like ‘oh, this character doesn’t look that way or that character is not a specific race’ it puts up barriers and what we want to do is build bridges.”

As the kid who” always struggled with being the weird kid and the outcast,” Harley Wallace of Fremont found that refuge in cosplay. He arrived today in black combat boots, skull fishnet leggings, and red and black shorts. Tiny playing card diamonds adorn his temples. On this day he’s Harley Quinn, the potentially psychotic girlfriend of the Joker.

Wallace is transgendered, and “not straight,” identifying as male after being raised female.

Growing up he fought against classmate’s expectations.

“They made their own assumptions about me based on things that they saw.”

In addition to sharing a name with the comic book villainess, both Harleys dealt with a world where they felt out of place.

He said taking on the other Harley’s identity “helps to remind me that whatever I am going through and no matter how toxic individuals in my life can be, I am better and I am stronger than what they make me out to be.”

As Jennie Eischeid said with a shrug, “we understand shunning.”

At the Omaha ComicCon, she not only fit in but found plenty of admirers of her precise adaptation of the Japanese hologram pop star, Hatsune Miku.

“When we come together, we may not have been on the same life path, but we’ve had similar experiences,” she said. Cosplay fans “just come together and enjoy our differences because that’s what makes us awesome.”

"A lot of Con goers are the oddballs, and I mean that in the most loving way, because I consider myself an oddball."

Marvel Comics icons Captain America and Black Widow were in the house.

Like any superheroes, this pair has frail human alter-egos. Captain America is Brandon Wolfe, a teacher and college student. With a square jaw, clean cut hair and the familiar red, white and blue uniform, he makes a convincing stand-in for the comic book version. “I have my actual metal aluminum shield,” Wolfe said, and then stopped himself to correct a detail no one familiar with the Marvel Universe would miss.

“Excuse me, it’s made of Vibranium. I broke out of character there.”

Black Widow, some will be surprised to know, works as a bank teller in her day job.

“I love it. It’s brought me out of my shell,” Hatfield said.

There were no signs of a shy girl under the scarlet wig cascading down her black patent-leather jumpsuit strapped with weapons. (As Hatfield described it, “Scarlett Johansson’s version mixed up with the Marvel Comics’ version.”)

That is no longer a problem when she gets into one of several costumes she’s collected. Her Instagram account is edging towards one thousand followers 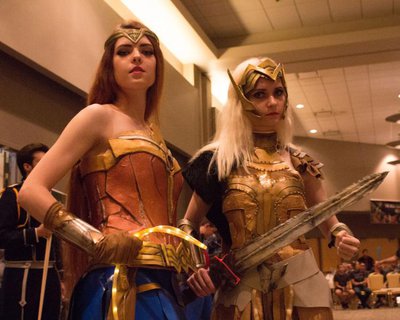 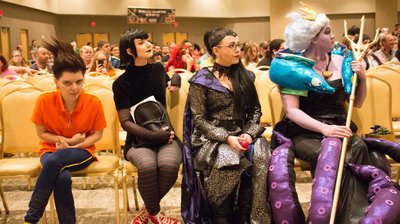 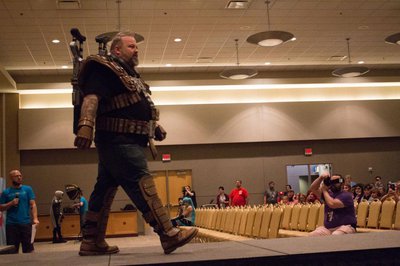 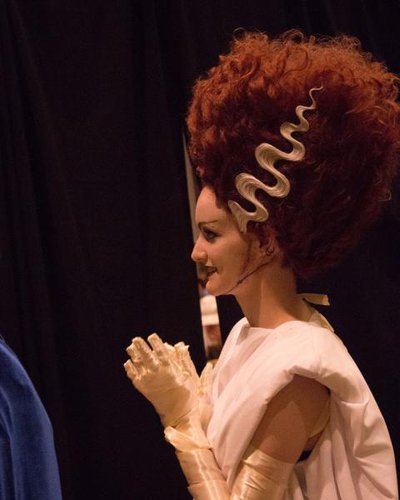 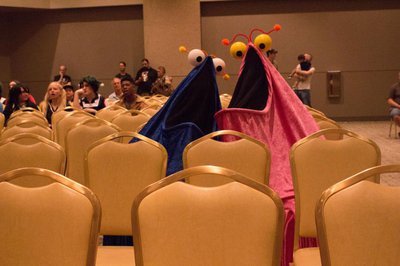 During ComicCon, the couple’s super-magnetism drew in fans like young Kylie from Louisiana, in Omaha for a hospital visit. Once the tiny, tough girl pulled herself out of her wheelchair Captain America urged the girl to “strike your best superhero pose!”

Kylie delivered with fists and a fierce look for the benefit of her mother’s camera. She beamed at the chance to get her photo taken with comic book royalty, telling a bystander the Captain was her sister’s favorite superhero.

“Embodying the character really comes into play when interacting with kids or special needs or things like that because it just makes their day," he said. The pair has done several visits to children in hospitals in the state.

Among most fans and role players there is a growing acceptance of diversity and an expectation of tolerance. Incorporating characters of the wildly successful Black Panther storyline in Marvel movies gave African-Americans new standing in the cosplay community.

“We love running into Black Panthers,” Wolfe said. “We want more big name characters who may not be comfortable in the community" to participate.

At conventions, he has seen “everybody regardless of what your body type is or what you look like” playing the parts of their favorite characters. “There are tons of people who will dress as a female character or vice-versa and it’s totally fine because we all love the character so why not.”

At one point another black cosplayer emerged from a group of more traditional costumed characters.

Lincoln artist Jared Sloger, rolled past in a wheelchair. The brilliant aqua blue fishtail encasing his legs led the way.

“This tail I am in? I can actually swim in it,” he says smiling beneath aqua-colored makeup covering arcing across his face. The costume was of Sloger’s own design.

“I go by AOKI, so it’s a Mer-Tiger, so half dolphin, half tiger type of character, so it’s my own creation,” he explained to a curious passerby. “I am also involved in the Mer-Folk community here in Nebraska.”

To be clear, a community of mermaids and mermen exists in Nebraska. Solger doesn't require a wheelchair for mobility. There is just no other way to circulate at the convention while encased in Spandex from the waist down.

Having a self-created character, according to Solger, is dismissed by some traditional cos-players. On rare occasions, race has been an issue.

As the hobby’s popularity grew, “Poppa Bear” Edwards acknowledges those who used to get bullied were a little too quick to pile on newcomers and outsiders, those who don’t seem to fit in. It’s something he talks about in his panel discussion on diversity.

“It’s disappointing to see people who went through (bullying) turn around and say ‘You aren’t a part of our group because you don’t do things the way we do it in the convention scene.’"

The sense of inclusion runs deep here, according to “Poppa Bear” English.

“All the things that divide us in our daily lives, politics and religion and things like that, none of that matters. Here we are all connected by our fandoms.”

The costume contest at the conclusion of Omaha ComicCon puts the joy of the participants on stage.

A full house at the MidAmerica Center ballroom appreciates the craftsmanship and theater as Dr. Who, and Optimus Prime and the Bride of Frankenstein compete on the level playing field of the runway.

Papa Bear was all smiles, judging contestants as they danced, pranced, and prowled their way down the runway before a screaming crowd.

The exuberance of an appreciative crowd of fans amplified the point he made to a visitor earlier in the afternoon.

“At the end of the day we are just playing dress up so let’s not be serious here. Let’s have fun. That’s the number one thing. Let's have fun!”