‘That Is Something You Really Never Want to See Happen:’ Nursing Home Residents Face the Challenges of Social Isolation

Calls for social distancing and quarantining during this coronavirus pandemic can sometimes have a greater impact on senior citizens. Experts say social isolation for the elderly can lead to depression and sleep problems.

Earlier this month, Geri DeGroff of Yutan, Nebraska, received a call from her mother’s physician. Her mother, who is 90 and suffers from dementia, was failing. The doctor urged DeGroff to go to the nursing home in nearby Wahoo. But when DeGroff called the nursing home, she was told it was not an end-of-life situation. She was not allowed to see her mom.

Situations like Degroff’s are playing out across the nation, as nursing homes have closed their doors to families, friends, volunteers and non-essential staff, to protect residents from COVID-19. One Washington state nursing home has been tied to 129 confirmed cases of coronavirus and at least 37 deaths. 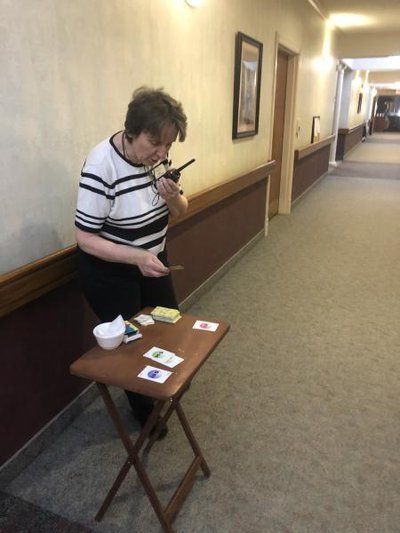 Mary Gomez, at Ambassador Health of Nebraska City, calls out Bingo numbers for players who sit in their doorways. Gomez offers the game in 30-minute shifts as she moves down the hallway to reach more residents. (Courtesy photo)

The restrictions on all visitors many nursing homes were already adopting became the official nationwide guidance on March 13. The Centers for Medicare & Medicaid Services (CMS) also advised facilities to cancel all communal dining and group activities.

“That is something that you really never want to see happen. It’s such an important piece of their social life,” said Stephanie Farmer, director of customer relations at Ambassador Health, which operates skilled nursing facilities in Nebraska and Iowa. “Mealtimes are times for them to socialize, to catch up, to talk about family, and to reminisce.”

“It’s hard that we have to follow all these rules, but it’s important that we realize the rules are designed to help us. And they’re as hard on the staff as they are on us,” she said. “The staff still come in here with a good attitude and a smile.”

DeGroff appreciates how stressful the situation must be for everyone who works at her mom’s nursing home. She believes the measures are well-intentioned, but the no visitation rule has been difficult for her mom. Neither DeGroff nor the caretaker hired to sit with her mom during the day have been allowed to visit. These had been her mother’s lifeline.

“I don’t want anyone in the nursing home to be ill. On the other hand, I’m concerned about my mom passing away.”

It’s challenging for families to accept the new rules.

“It was their normal to see their loved one every single day,” said Jessica Crunk, interim director at Ambassador Health of Nebraska City.

But shutting the elderly away to protect them can lead to other health problems.

To combat loneliness, staff, friends, and family of residents at nursing homes are using technology like Skype and FaceTime to engage their loved ones. The Ambassador has iPads for resident use, but Crunk says a lot of their residents arrive with their own gadgets. VanderVeen has a GrandPad. 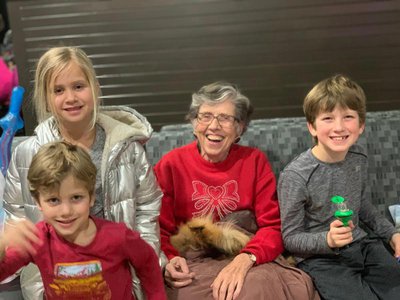 Fern Jansa and three of her great-grandchildren. Now they visit her outside the window of her rehabilitation facility. (Courtesy photo)

Then there’s Fern Jansa, 86, who uses a flip phone, so she can’t access remote video-conferencing technologies.

So Jansa’s granddaughter and her family needed to get creative. They surprised Grandma Fern one evening outside her window at South Haven Living Center, in Wahoo. Jansa was so delighted the family decided to make it a regular party.

“They’ve done this darn near every day now when it ain’t been raining,” Jansa said. “It’s so much fun. You just look for them to come at night. You don’t know which way they’re coming, what window they’re going to be in, but here’s the kids and them and laughing, so it does add some excitement. Some happy excitement.”

Staff at Ambassador Health have also innovated to keep their residents happy, organizing hallway concerts and Bingo, where residents listen or play while sitting in the doorways of their rooms.

For those whose loved ones suffer from dementia, however, it’s tough to find a workaround to the new restrictions. Without touching her mom, DeGroff says it’s hard to reach her.

DeGroff’s mom recently took another bad turn and was taken to the hospital. Her mother had lost weight. She was 94 pounds. Reunited at the hospital, DeGroff wrapped her arms around her mother’s frail shoulders and wondered what the next right step was. If she sent her mother back to the nursing home, she wouldn’t be allowed to see her again.