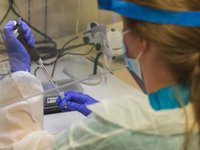 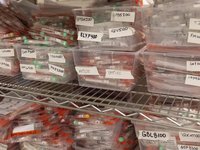 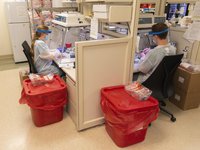 As the coronavirus pandemic worsens in some parts of the country, new cases in Nebraska continue to decline. But the state is far from meeting its goal of 3,000 COVID-19 tests per day.

It promised 540,000 total tests for the state, and officials estimated reaching 3,000 new tests per day within five weeks. 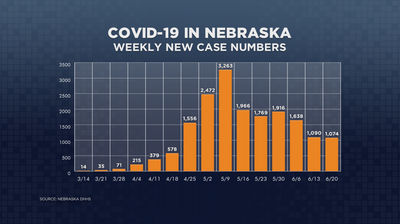 The number of new COVID-19 cases per week has been declining. (Graphic: Joe McMullen, NET Nebraska)

"Hopefully we’ll go much faster than five weeks," Newman said. "Hopefully something like two to three."

The state’s online data dashboard shows an average of about 2,500 tests per day last week – and that’s all testing in the state, including private initiatives like through Bryan Health.

A Department of Health and Human Services spokesperson says there were an average of 1,200 Test Nebraska tests per day over the past week.

Gov. Ricketts says the state is equipped to collect and process 3,000 tests daily, and has had that capacity since the end of May — almost exactly five weeks after the announcement.

Nomi Health Chief Operations Officer Josh Walker says they’re ahead of schedule in delivering the tests to Nebraska. And he says getting to this point is an impressive accomplishment.

"Even a five week time frame is an incredibly fast time frame to do what we’ve all collectively done," Walker said. "I think that should be applauded."

Walker also says the state's contract doesn't require a certain number of tests per day, but Nomi and the other companies involved have worked to help Nebraska reach its goal.

Gov. Ricketts says they aren’t reaching 3,000 tests per day for a couple of reasons. For one, they can’t fill all the available slots outside of Omaha and Lincoln. This week Test Nebraska will be in areas including Fremont, North Platte, and Valentine.

"One of the issues we run into also is when we sign up people for Test Nebraska, we’ve got scheduling slots. We found I think about a 15% rate of not showing up," Ricketts said at a news conference last week. "So that also takes us down. We don’t want to promise a slot to someone who doesn’t show up."

The number of tests isn’t the only metric.

Dr. Ali Khan is Dean of the College of Public Health at the University of Nebraska Medical Center. One number he’s paying attention to is the positivity rate – that’s the percentage of all tests that are positive for COVID-19.

"It concerns me in that we have not yet gotten the positively rate below three to 5% so it's still 7 to 9%," Khan said. "So we're clearly still not testing enough people in Nebraska."

Nebraska’s positivity rate has been going down steadily; it was 5.9% last week.

Reporting in The New Yorker and the Salt Lake Tribune has raised questions about the accuracy of the tests, which are sourced from Co-Diagnostics, Inc.

The positivity rate for Test Nebraska is about half the rate of other testing initiatives in the state. The concern is that the tests miss positive cases — but officials attribute that to testing everyone, not just those with symptoms or in higher-risk groups.

"We have a lot of confidence in the FDA," Walker said. "And the FDA has reviewed and approved and looked at with scrutiny Co-Diagnostics and their testing."

A representative of Co-Diagnostics declined an on-the-record interview, but said in a statement, "Co-Diagnostics stands behind the quality of our technology platform, and performance of our testing products."

Another important factor is contact tracing. When a Nebraskan tests positive for COVID-19, public health officials investigate who that person has been in contact with recently, because they’re at higher risk for infection.

Dr. Khan says an average of more than 150 new cases per day over the past two weeks is a red flag.

And, he says, it’s not impossible to reach zero new cases per day.

Dr. Khan says the fight against the coronavirus pandemic includes all of us, not just the government:

"If everybody started to wear a mask we would also markedly decrease the number of cases within our community."