Nebraska lawmakers began debate on proposed changes to taxes and school funding, amid questions about whether any plan has enough support to advance. And lawmakers gave first-round approval to a bill aimed at women who change their mind after taking the first of two pills for an abortion.

The bill seeks to drive down property taxes by increasing school aid. That’s funded by new taxes on previously exempt goods and services, including car and home repairs, pop, and candy, and increases the existing sales tax by half a cent. Linehan said that would leave Nebraska still competitive with neighboring states.

Sen. Ernie Chambers focused his fire on that tax increase. “I’m concerned about the poor…To so casually say you’re going to raise the sales tax by a half percent and that makes Nebraska competitive with other states – what do I care about other states? I live here. The poor people I see live in this state. Is it competitive for the poor people?” he asked. “You all don’t care about the poor, because you’re not poor. You don’t have to go to the store and count pennies to see if you can buy the bread.”

Supporters of the plan said it would increase the earned income tax credit to offset the effects on poor people.

Sen. Tom Briese said it’s time for lawmakers to act.. “It really is decision time for this body. We have to decide if we’re going to stand with Nebraskans demanding and deserving property tax relief, or are we going to stand in the way?” he said.

The proposal would direct most of the additional school aid to largely rural, small and midsized school districts. But senators representing the largest districts, which educate most of the state’s students, said they were concerned changes in the school aid formula would hurt their districts. Among them was Lincoln Sen. Kate Bolz. “I think that the changes in the maximum levy will result in a significant decrease in funding for Lincoln Public Schools. I’m told that that will be estimated at $16 million from current law, or $3 million from the current year,” she said.

Sen. Mike Groene, supporting the plan, said the larger districts would lose some authority to levy property taxes, but the idea was to replace that with more state money.

Sen. John McCollister said he favored moving ahead with the bill for now, but wouldn’t support it in the end unless it’s improved. “I think the plan that we’ve developed isn’t the best plan. There are some alternative plans that are more sustainable, easier to understand, and are scalable. So I think… we need to develop something a little better,” he said.

Senators reached the 3-hour time limit for Tuesday’s debate without reaching a first-round vote. Linehan said afterwards that the effort is not over, and she’ll continue to try and round up enough support to advance the bill in some form. 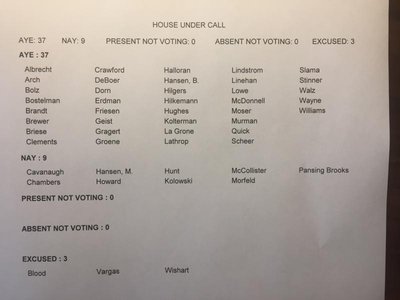 This was the vote on LB209, the abortion bill.

Also Tuesday, lawmakers gave first-round approval to an abortion-related bill. Sen. Joni Albrecht’s LB209 would require abortion providers tell a woman seeking an abortion if she changes her mind after taking the first of two abortion-inducing drugs, she can get information on medical assistance on the Department of Health and Human Services website.

Albrecht said the proposal calls for informed consent. “It’s a woman’s right to have complete medical information regarding a medical abortion process. So it’s important that we give all women the information that they need to make that truly informed choice. LB209 would be life-changing for those women who want a second chance at choice,” she said.

Opponents argue there’s no scientific evidence that giving a woman progesterone after she takes the first pill increases chances she’ll remain pregnant, and the bill requires abortion providers give inaccurate information. “This bill is not about informed consent,” Chambers said. “It is, as all these so-called consent bills are, an assault on a woman’s right to get an abortion.”

Senators voted 37-9 to give the bill the first of three approvals it would need to be sent to Gov. Pete Ricketts for his signature.