A new play opening tonight at the Lied Center in Lincoln is a combination of sharing stories of trauma and a full theatrical production. The people sharing their stories say they found healing in the 10 month process of shaping the play.

Barbara doesn’t want to give her last name, but she does want to tell her harrowing story. She grew up in Chicago and had two abusive parents who would beat her. She witnessed murders as a young child, including one of a person very close to her. And she was placed in a psychiatric ward in her teens where she was molested. She’s come a long way since then. Now she’s part of a new play called “Shadows and Light Within: Untold Stories" in the Johnny Carson Theater at the Lied Center in Lincoln. At rehearsal for the production, Barbara says she spent a long time grappling with her trauma and blaming herself. She says she was a flower in a potted plant.

“Whatever I learned in Chicago – the struggles that I went through to get where I'm at now – I went through there now it was time for me to move on into a new pot,” Barbara said. 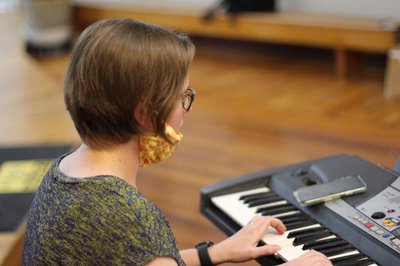 Performers practicing at a rehearsal in Lincoln. (Photo by Brandon McDermott, NET News)

She moved to Lincoln with her daughter and has reinvented herself, finding the support she needed to cope with her past.

“It takes only one person to believe in your dreams with you and just encourage you,” Barbara said.

“It’s allowed all of us, I think, to gain a perspective on ourselves in relation to others, that kind of transcends the norm,” Ray said.

“Maybe I had a different lived experience, but I can understand your perspective and your point of view more deeply because of this ability to be able to bring it forward and show it,” Ray said.

Melodee Landis is a retired educator and was one of the coaches helping share stories of trauma. She says working with the survivors helped shape the production from the beginning.

“That was an incredible, incredible experience and amazingly enlightening and I think it really helped build the empathy that hopefully heals,” Landis said.

She said this play will touch many, whether they have experienced trauma or not.

“Seeing certain things together will have a power that I think will really impact them,” Landis said.

Elizabeth Dewey is one of the survivors sharing her story. She grew up in the foster care system and says it’s taken her many years to come to grips with her pain. She knew now was the time to share it.

“Because I wanted to help other people, I wanted to tell my story and have people know that it's going to be okay,” Dewey said. 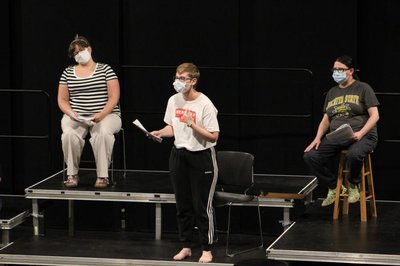 A performer practices lines at the Lied Center in Lincoln. (Photo by Brandon McDermott, NET News)

Dewey says living in the foster care system, caseworkers and system workers didn’t focus on the most important part of their job: caring for the child.

“As a kid, I felt like nobody listened until finally somebody did,” Dewey said. “But it wasn't good enough.”

Dewey says this process has helped her understand her past better and even grow closer to her mother.

“So doing this process helped me understand that, she's a person too and she has her own trauma and her own pain,” Dewey said.

At rehearsal at the Lied, Barbara watches the performers warm up on stage.

“I believe this is healing for a lot of us because there's some people that don't even talk about it. Our mind could take us to a crazy place when we don't talk about it,” Dewey said.

She says she had to embrace her trauma before she could fully let it go. When she moved to Lincoln, she found a great group of people, from her counselor to non-profits, who helped her.

“They became my mechanic,” Dewey said. “They gave me the tools. They didn't display the tools and do the work on me. They allow me to do the work myself.”

Barbara says in life, you take what fits you and Lincoln, Nebraska is a perfect fit for her.