Genetic engineering has revolutionized the sugar beet industry. But an upcoming decision from the U.S. Department of Agriculture on which foods must carry GMO labels has many farmers wondering whether they’ll need to ditch their biotech seeds.

Colorado farmer Steve Kelly brushes aside a small mound of dry yellow dirt to reveal a sugar beet seed that’s no larger than a peppercorn. It seems insignificant, but the seed is different from what he planted more than 20 years ago.

Now all but 5 percent of sugar beet seeds in the U.S. are genetically modified, or GMO.

Industry experts say GMO has revolutionized sugar beet farming, but an upcoming decision from the U.S. Department of Agriculture has many farmers, Kelly included, wondering whether they’ll have to return to conventional seed. 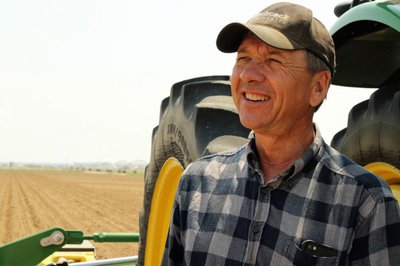 GMO foods must be labeled by 2020 under a federal regulation. Beet sugar looks molecularly identical to any other refined sugar, but if the USDA decides it and all the products its used in get a GMO label, sugar cane will get a leg up because it’s a non-GMO crop — hurting sugar beet farmers and possibly raising consumer prices.

Consumers may be unfamiliar with the sucrose-rich tubers; they’re not found in the produce aisle. But it’s likely you’ve eaten it: 55 percent of all sugar produced in the U.S. is from beets — refined into white granulated sugar — and it’s used to make everything from candy to bread.

Major companies like General Mills and Hershey have already replaced beet sugar with sugar cane in a number of products as a part of their “non-GMO” advertising to try to appeal to the 39 percent of Americans who, according to the Pew Research Center, believe GMO foods are unhealthy.

But a 2016 report from the National Academies of Sciences, Engineering and Medicine suggest there’s a consensus from the scientific community that GMO foods are safe. And many in the sugar beet industry fear GMO labels will reinforce current misconceptions and push consumers away.

Rebecca Larson is the chief scientist with the Western Sugar Cooperative, an organization that’s collectively owned by more than 800 sugar beet farmers in Montana, Wyoming, Colorado and Nebraska. She said it’s “just not fair” if uninformed consumers will see a GMO label and assume that means the product is unsafe or “better for the environment and therefore more sustainable.”

“We as a community need to go out and educate about how that can be completely the opposite,” she said.

But opponents to GMOs argue that labeling will give consumers more transparency about how a food was grown. Farmers use herbicides, namely glyphosate, on GMO crops, which Patty Lovera from the nonprofit group Food and Water Watch believes are bad for the environment and people’s health.

“There are farmers and farm workers involved in handling these chemicals. There’s runoff into our bodies of water,” she said, but didn’t have specifics on the sugar beet industry itself.

Since adopting GMO sugar beets, Kelly said he’s used less herbicide on his fields in Greeley. The conventional sugar beets he used to grow required a cocktail of three different herbicides that had to be sprayed three to four times a year, “and a lot of times it didn’t work,” he said.

If the USDA decides to label sugar beet products as GMO and farmers returned to non-GMO beets, the effects may be felt at the grocery store.

A 2014 study found that if consumers prefer products without a GMO label, the cost of food will rise as companies purchase more non-GMO ingredients, which tend to cost more because they have lower yields.

Plus, ditching GMO seeds would require Kelly to hire workers to help weed his fields.

“It wouldn’t be feasible probably for us now,” he said.

The decision from the federal government is expected later this year.