More Nebraskans started getting arrested for pot possession when Colorado legalized the drug according to a new study by researchers at the University of Nebraska at Omaha.

January 1st, 2014 was the first day people could legally buy pot in Colorado for recreational use. In the year that followed, more people in Nebraska were arrested for marijuana-related crimes than the year before. If you keep an eye on the news, you know that’s not necessarily new information, but now the research backs it up.

Ryan Spohn is the director of the Nebraska Center for Justice Research, and the author of a new study which shows between 2013 and 2014, Nebraska’s marijuana arrest rate increased by about 11 percent. 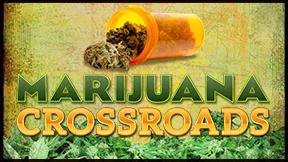 Watch this NET News documentary "Marijuana Crossroads" on the impact of the legalization of marijuana in Colorado on Nebraska.

Legal Pot Next Door: First Marijuana Dispensary on the Border Eyed by Nebraskans

Marijuana is decriminalized in Nebraska, but that doesn’t mean there are no consequences for possessing it. Anything under an ounce is considered a minor infraction, punishable by a fine of up to $300 for first time offenders. Anything over an ounce could result in jail, fines, or both.

The counties with the largest increases in pot arrests were generally located along or near the Colorado border, and along Interstate-80.

Banner County, in Nebraska’s panhandle, had the largest one year increase in arrest rates, going from under 4 percent to more than 22 percent.

Spohn said the numbers aren’t necessarily indicative of people consuming more or less marijuana, since the scope of the study was limited strictly to arrest records.

“We don’t have information on actual use of marijuana, actual amounts,” Spohn said. “You always have what criminologists call ‘the dark figure of crime’ where you don’t know what people are actually doing, you only know what are reflected in arrest rates. So some of our numbers could be due to actual changes in individuals’ behavior, some could be due to changes in the emphasis of policies of local law enforcement agents.”

Spohn said in the future, he hopes to interact more directly with law enforcement officers and county prosecutors, to find out if in fact their policies towards marijuana enforcement have changed. Spohn said some agencies have cooperated with individual press outlets, but there is no standard metric in place.

The results of Spohn’s study will be distributed to state legislators.

For more stories from KVNO News, visit their website.