The University of Nebraska-Lincoln has been a part of two studies that looked at differences in the views of men and women economists on a wide variety of public policy issues in both the United States and Europe. The authors of the study were Ann Mari May and Mary McGarvey of UNL and David Kucera of the International Labour Organization in Geneva, Switzerland. The study looks at the ideals and principles of both male and female economists.

The research found opinion gaps in how the government should react in protecting the environment and whether or not focus should be on market solutions or government intervention.

Brandon McDermott, NET News: So there appears to be several articles over the past few months in the New York Times, The Economist and The Washington Post that highlight potential problems of gender equity within the economics profession. Is this a trend you see continuing and, if so, why is this important?

Ann Mari May, Professor of Economics, University of Nebraska-Lincoln: It is important in a larger sort of public policy sense. In my research, I'm interested in questions of inclusion in the profession – because it's often argued that women need to be at the table when policy is being developed, when it's being debated and discussed – and that sort of presumes that the opinion of a woman at the table might be different than that of the guy sitting next to her. We don't know if that's true or not. One goes through extensive training in getting a Ph.D. and years and years of education and it is the same education for men and women graduate students and so we don't know. It hadn't been tested before we started looking at this issue. 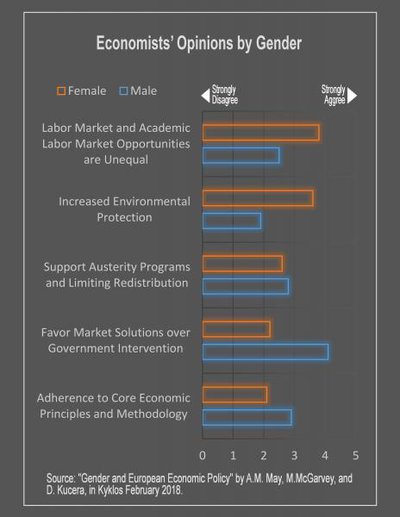 McDermott: Where does your research fit into this topic?

May: So it's part of an overall project – this part looks at European faculty in 18 different European Union universities and countries. They all offer doctoral programs and so it was a very large survey of faculty. In that survey, we didn't know what we'd find. We didn't know if there would be a difference in views in the EU as there was in the U.S. or not. What we found was that there was a difference in the views of faculty – male and female faculty – on all five areas that we examined.

McDermott: Your research found that women are less likely than their male counterparts to favor market solutions over government interventions and more likely to favor environmental protection policies. What other differences did you find?

May: The largest difference in the European study was on that issue of market intervention. So, it's important to remember that economists or sort of weaned on market economics. This is what is taught in graduate schools – free markets are the epitome, everything else is sub-optimal – that is sort of presumed to have a very high place in the thinking of most economists.

We saw that women were less likely to believe in the power of the market in resolving all problems and more likely to see the need for government intervention than their male counterparts. One of the areas where we saw the largest difference – in the U.S. study – was in the area of gender equality and gender equity. This was the largest gap in our study in the U.S. Men were far more likely to see the gender wage gap – for example – as a result of skills and choices and women were much more likely to view this as a lack of equal opportunity.

McDermott: Looking at the research what in the findings of your study do you find most interesting between what women and men economists believe?

May: We went into another great amount of curiosity and then once we did the U.S. study, we were interested to find (out) ‘well, maybe that's just the U.S. and maybe it's not true in Europe and maybe economists in Europe have more of a consensus between men and women.’ We did find that even though all five categories showed a statistically significant difference in views, oftentimes the differences were smaller in Europe than they were in the U.S..

McDermott: How did the research in Europe and America differ – I know you've kind of touched on this already – but Americans are typically seen as more conservative than Europeans.

May: When we developed this study questions, we had to address policy issues that were relevant to the U.S. and policy issues that were more relevant to Europe. In Europe there's a wider range of policies that are implemented and debated than in the U.S., which made for more challenge and more fun in developing the survey. So, we asked a broader set of questions for the European study than for the U.S. study.

McDermott: All this research – why is this important for policy making?

The majority of associate professors, all the way down the line – higher education and in economics – it's dominated by male views. Those are the people then that move in and out of serving on boards, providing expert opinions and testimony. So, you start to see the cumulative effect of having only one sort of set of voices represented and maybe excluding another.