Students Across Nebraska Are Learning to Spot Unsafe Drinking Water

The more than 13 million American households who get their drinking water from private wells aren’t required by state or federal environmental agencies to test their water, sometimes leaving dangerous contamination unchecked for years. Now high school students and other community members are learning to test their own water.

“Who better to manage their own natural resources, then the people consuming them, if they’re trained, if they’re educated?” asks Christopher Olson, who teaches students across the state about water quality.

Olson, a graduate student at the University of Nebraska, works with the “Know Your Well” program, which has trained over 100 students how to collect water samples and then test them for pollutants. Those results are analyzed by environmental scientists and sent back to participants if red flags appear.

Addison Dorn, a senior at Freeman Public Schools in the southeastern town of Adams, Nebraska, braved a cold Midwestern night to collect water samples from her family’s well. The next day, she and her classmates tested this and other samples they gathered for contamination, like too many nitrates.

“It usually gets in well water around here because of fertilizers,” Dorn said. “Nitrogen is found in fertilizers, so when there's a lot of rain, or irrigation, that can sometimes seep into your groundwater, which will go into your well.”

Some studies have connected drinking polluted water over a long period of time to fatal health complications like cancer and blue baby syndrome. It’s been estimated around a quarter of wells in agricultural communities aren’t safe to drink from because of high nitrate levels.

But Tony Jensen, Freeman’s agriculture teacher and Future Farmers of America sponsor, didn’t see many people testing their wells. “I don't think a lot of people realize that you should get tested as often as you should, so it’s kind of that educational component for the community,” he said.

So he signed the school up for a citizen science program through the University of Nebraska-Lincoln’s Water Science Laboratory.

But he thinks that attitude can shift if students are given hands-on opportunities to learn how science impacts their everyday lives.

“I grew up in the seat the entire time, in front of a blackboard or whiteboard, twiddling the pencil with no hands-on experience. And I really struggled with that academically,” Olson mused.

Having grown up attending urban public schools in the San Francisco Bay Area, he never expected to find himself in a classroom again, let alone teaching a science program in rural Nebraska schools. These days, the challenge is deeply personal to him.

“I really disliked academia, and I didn't want to go to school anymore...I don't want that issue for these other students.”

But Mary Skopec, who runs the University of Iowa’s Lakeside Laboratory, says citizen science didn’t always go hand in hand with such democratic ideals. It was historically practiced by those privileged enough to do it without outside financial support: think Sir Isaac Newton or Charles Darwin.

“I think of the British guy with his pipe, walking around looking at birds...naturalists that have been observing major phenomena for forever,” she said.

That’s changed over the past few decades. 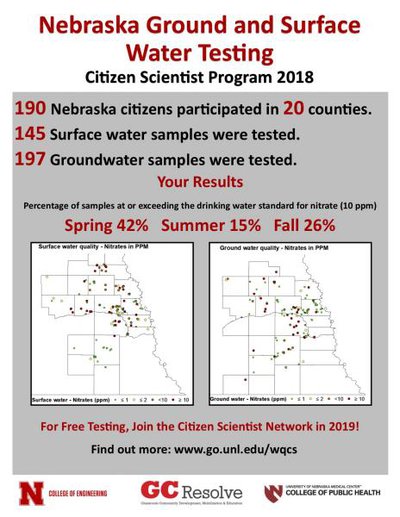 Heafer participated in this citizen program administered by the University of Nebraska. This year, the program was even more popular after flooded communities reached out for testing kits. (Photo courtesy of GC Resolve)

“There’s been this strong upswing in folks who wouldn't identify as scientists who care about the environment, who care about seeing things get protected and get better.”

Skopec supervised a similar program in Iowa for ten years, which trained the public to test local streams and creeks. At its peak, Skopec’s team had 5,000 volunteers.

“After a few years, word of mouth was so strong that we didn't have to advertise at all,” Skopec said. “We had to limit how many training sessions we could have, just because we didn't have the staff and resources to cover all the people that wanted to be trained.”

In the past few decades, national citizen science organizations have taken root, boasting projects across the country. Harry Heafer, who lives just south of Lincoln, has participated in a few over the years.

He said rural projects play a critical role in tracking statewide drinking water quality since neither state nor federal agencies require well owners to regularly test their water. And even if they did, it would be a fool’s errand to task often short-staffed offices to consistently track quality.

“And even now, the city-county Health Department likely has records when the well’s first put in, but after that, there's no record of what happens to the water.”

Now that the Environmental Protection Agency has reversed the Obama-era Waters of The United States Rule by removing most small bodies of water from federal oversight, Heafer thinks citizen-led initiatives are more important than ever in areas like eastern Nebraska. He mentioned his concerns around the environmental impacts of the newly operational Costco chicken plant.

“People should be getting their water tested now, so they have a baseline before all this manure starts getting added to fields, and have more possible improper or over application,” he said.

Heafer’s nitrate levels were already unsafe when he moved into his home thirty years ago--over 10 parts per million. But through volunteering for various well testing programs, he’s watched levels climb to 18 parts per million over the years. He eventually warned his neighbors, some of whom have young children.

That’s exactly the kind of conversation the “Know Your Well” program hopes to inspire, by teaching students to be aware of water issues and raise them within their communities.

Back at Freeman High, Addison’s friend Rae Ann Hartwig showed her how to mix a well sample with a reactant in a sample tube. The pinker it turns, the higher the nitrate content.

“Everything's getting mixed and then you just let it sit, and then color development will happen over time,” she recited.

Addison Dorn analyzes a sample taken from her family's irrigation well. The sample measured between 10 and 14 parts per million, which is not considered safe to drink. (Photo by Christina Stella, NET News)

A few minutes later, the group is surprised to see the tube turn cotton candy pink. Thankfully, Dorn won’t be drinking from that well: it’s used for irrigation. But Hartwig is still quick to reassure.

“But don’t worry! Her iron levels are safe!”

Olson is delighted in these kinds of scenes, especially in a classroom setting.

“There's a lot of distrust between the general public and the professional scientists,” he said.

“And one of the most useful tools to bridge that gap is citizen science...the knowledge of science should not be hoarded and stored within government, or within upper echelons of professional science.”

Mary Skopec has also found that communities are less likely to discuss solutions, such as working to use fertilizer more precisely or installing a home filtration system, if they can’t see evidence of the issues themselves.

“And I think that's really, really powerful because most people hated science when they went through in school, because they saw it as a test, right or wrong answer, as opposed to a process of good gathering and understanding information.”

“The answers are more nuanced...it’s not a ‘gotcha’ moment.”

Editor's note: This story is part of our "Best of 2020" Signature Story report. The story originally aired and was published in February.