Construction is one area of expected job growth in Nebraska in the next three years. (photo by Mike Tobias, NET News) 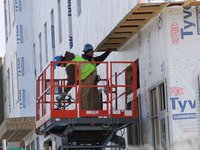 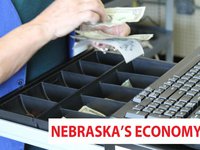 Nebraska can expect steady economic growth in the next three years. That’s according to a report from the University of Nebraska-Lincoln’s Bureau of Business Research. But what businesses will be winners and losers in the near future? NET News Senior Producer/Reporter Mike Tobias talks one-on-one with Eric Thompson, a UNL economist and director of the Bureau of Business Research.

MIKE TOBIAS, NET NEWS: Eric, your long-range forecast predicts that Nebraska will add more than 32,000 jobs through 2017, which would be roughly a one percent increase. You believe many of these will come in the construction industry. 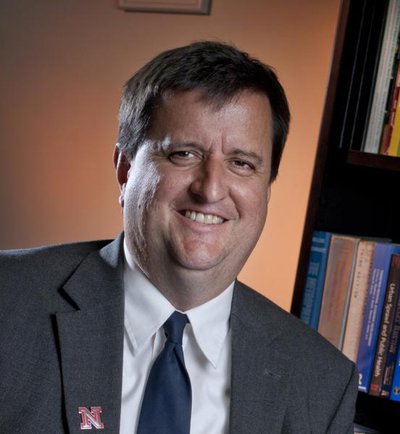 BY THE NUMBERS: PREDICTIONS FOR NEBRASKA

(for the next three years)

Labor force information/data from the Nebraska Department of Labor

ERIC THOMPSON, UNL ECONOMIST AND DIRECTOR OF THE UNL BUREAU OF BUSINESS RESEARCH: The construction industry is expected to be the fastest growing industry in terms of employment over the next three years, and really a lot of that is a bounce back from the Great Recession. So during the Great Recession, Nebraska lost thousands of construction industry jobs. We haven't got those back yet; in fact we're still way below the levels we were back in 2007. So we're expecting over the next three years that we’ll start to get more of that employment back. Not getting back to where we were, but recovering quite a few of those jobs.

TOBIAS: In this latest study, health care is another growth area.

THOMPSON: Yes. Health care continues to grow as incomes grow, as our population grows, the health care industry grows along with it. I wouldn't say the growth will be exceptional, but it will continue to be strong, certainly with the aging of the population here in Nebraska and throughout the country, that's supportive of growth in health care employment as well.

TOBIAS: Talk about other areas where you see potential growth in the next three years?

THOMPSON: We should add a few manufacturing jobs, although probably only a thousand or so over the three-year period. One area of strong growth should be the transportation industry. That’s another industry where we lost a lot of jobs during the Great Recession, and that hasn’t really sprung back yet. We’re anticipating with the national economy continuing to recover that Nebraska transportation employment will finally grow again, and that will be one of our faster growing industries. Another area where we’ve had some job growth recently is retail employment. With the bounce back in the economy there’s been a lot of retail sales growth. You see that in some of the sales tax numbers as well, and that’s supported some employment growth. Finance would be another sector; it hasn’t had a lot of growth over the last four or five years, again with that Great Recession, but seems to be coming back now in the banking sector, in the real estate sector, and even a little growth in the insurance sector. One area where we’re not expecting much growth is in state and local government employment. That area has been very stable in recent years. We do expect some increase, but I guess the habits learned during the Great Recession of really keeping a lid on spending, and on employment at the state and local level, that seems to have become somewhat of a more permanent phenomenon.

TOBIAS: Let’s come back to manufacturing for a second, because in that area you talk about “two cross-cutting trends” during the next three years. What are those and why does that matter?

THOMPSON: Well, we’ve had a lot of interesting changes in the global economy in recent years. One of which has been the increase in the U.S. dollar; that's been more over the last six to eight months. Another has been the decline in the value of oil or the price of oil. So these two things will be working sort of at the same time in the Nebraska manufacturing sector. The high value of the U.S. dollar is going to make it more challenging for export businesses. Agricultural is obviously a big export business in Nebraska. Agriculture-related manufacturing is a big export industry in Nebraska. So the rising U.S. dollar, which has occurred because the U.S. economy is a bit stronger than economies around the world, that's going to be challenging for agriculture and some of our export businesses. At the same time, that falling value or price for oil and gasoline should eventually benefit our economy, as consumers have more money to spend on other goods and services since they don't have to spend as much on gasoline. So those two cross-cutting currents will be competing with each other in our manufacturing sector over the next three years, and I think the net outcome will be just a little bit of job growth. Not strong growth, but at least improvement.

TOBIAS: Talking a little more about agriculture, after reaching a record high of more than $8 billion in Nebraska in 2013, a lot of experts, including yourself in this report, believe ag income will continue to decline in the near future. How will this impact rural job growth?

THOMPSON: Yes, we are experiencing a decline in farm income, although I would characterize it as a decline that's part of a return to normal. So we had record farm incomes. What we're seeing is those farm incomes are retreating now back to about the $5 billion a year level. Now if you take a long-term perspective, that's almost twice of what farm income was 10 years ago. So while farm income is declining, from a longer term perspective it's up rather sharply. So we're still going to have a strong farm sector in Nebraska going forward, much bigger than it was a decade ago, supporting a lot of jobs, supporting a lot of earnings opportunities in agriculture. But it’s going to feel for the next few years like weakness because we're coming from a period of very high profitability, at least in the crop production sector, and a lot of spending associated with that on farm implements and things of that nature, and some of that is going to get cut back and that's going to create some weakness. But for the long run people should feel pretty good about where Nebraska agriculture is.

TOBIAS: There’s actually one area where you’re predicting that there will be a loss of jobs in the next three years, and it’s actually happens to be what I do for a living.

THOMPSON: Yes. There's an industry called information, and it really involves all the different ways people receive information, all the different industries that provide information. So obviously broadcasting is part of that, the newspaper industry is part of that. But it also includes things like web broadcasting. It includes things like movie theaters, which is delivering information in a sense. Book publishers, things of that nature. That industry, because of new technology, was very affected by the Great Recession, and it’s been either steady or losing jobs for years. Now, the job loss seems to have slowed dramatically, and I would characterize the employment in the industry is fairly steady but drifting downward a little bit. At this point it's really just the story of productivity. It's such a competitive industry. People are constantly producing more with less, and because of that even though demand for broadcasting services is growing the employment is trending down.

TOBIAS: So your broad takeaway from all this is steady but kind of modest growth for the next three years?

THOMPSON: Absolutely. Steady but modest growth. One thing we may find a little disappointing is the U.S. economy will grow faster than the Nebraska economy over the next three years. I think to a large part that's because we're in better shape than the rest of the country. They still need to recover. They haven't fully recovered yet in other states from the Great Recession. The Nebraska economy by and large has, so the other states are going to need to grow a little faster than Nebraska over the next three years just to catch up to us. But it also should be said that our population growth continues to be slower than the average state, and ultimately because of that job creation, business growth in our state, is going to be a little slower than the rest of the country. That's an issue we may want to work on, see if we can get our state economy and our population growing faster over the long run.

TOBIAS: Finally, are there any factors, either positive or negative, things that we ought to watching, that could really greatly impact a lot of these projections?

THOMPSON: I think the biggest risks to the Nebraska economy are related to macroeconomic conditions. The U.S. economy is quite strong right now, but has faced some shocks. The rising value of the U.S. dollar has hurt U.S. exporters. Some parts of the country have been experiencing economic problems because they are heavily involved in the oil industry and the price of oil has fallen so much. So if the U.S. economy was to slow significantly, obviously that would affect us here in Nebraska. The rising value of the U.S. dollar also could be problematic for agriculture, our biggest export industry. If the value of the U.S. dollar kept rising and rising, it’s been rising very quickly the last six months, that could be problematic, although I would expect it is going to start a plateau now. On the positive side, I think the biggest things that could happen that would benefit the Nebraska economy is if the federal government would start to address some of the issues it’s been neglecting in recent years. So there’s been broad calls for entitlement reform. There’s been broad calls for tax reform, for legal immigration reform. Those things haven't really been happening. I think they would be big positives for the economy if they did. If we were to get movement in that regard I think the U.S. economy and the Nebraska economy could grow much more quickly. I don't know how likely any of those events are. I really do think the most likely scenario the next three years would be for steady growth in Nebraska and I think finally the U.S economy should recover from the Great Recession in the next few years.