Hundreds of Nebraskans gathered inside the Heartland Events Center on the state fairgrounds in Grand Island Saturday to witness the first debate between U.S. senate candidates Republican Deb Fischer and Democrat Bob Kerrey.

The outcome of the race in November could help determine the balance of power in Washington, with Republicans hoping to flip control of the seat being vacated by Democrat Ben Nelson.

Rural issues were the main subject of the debate. Kerrey and Fischer both said they would have voted for the Senate version of the farm bill, which cuts $23 billion from current farm and nutrition spending. They urged quick action on legislation that has languished in the House of Representatives.

“The Senate passed a bill. The House agriculture committee did as well,” said Kerrey a former U.S. senator and Nebraska governor. “And a relatively small number of people in the House are tying it up. We’ve got to get that farm bill passed.” 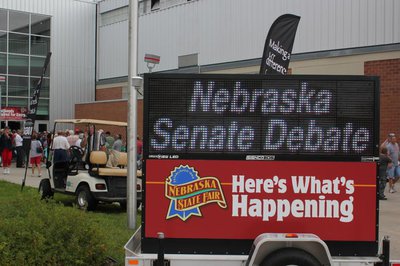 Bob Kerrey and Deb Fischer met for their first debate at the Heartland Events Center in Grand Island. 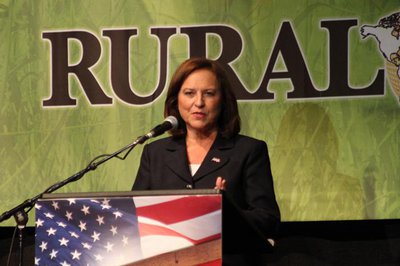 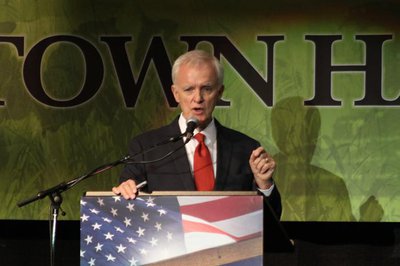 Fischer also argued it would be easier to pass the farm bill if it were divided. The farm bill is stalled in the House over cuts to the food stamp program called SNAP. Fischer said that discussion steals attention away from crop insurance and disaster aid for farmers and ranchers.

“You know, I get tired when people talk about a farm bill, and the billions of dollars in a farm bill, when the farm portion of that bill is less than 20 percent,” Fischer said.

“The bill, actually, is not a farm bill,” Kerrey said. “It’s a food, farm, and jobs bill. That’s what it’s always been. Now, you may want to make it just a farm bill. I think it would be disastrous to do that.”

Throughout the debate Kerrey sought to differentiate himself from Fischer by stressing his intention to broker bipartisan compromise and rise above partisan gridlock. Fischer, who polls suggest has a substantial lead in the race, made clear she intends to stay true to conservative principles, like cutting taxes and spending.

Those differences came out on the issue of immigration. The Latino population in Nebraska grew 77 percent from 2000 to 2010. That has transformed many rural communities, while also raising controversy over policies toward undocumented immigrants.

For Fischer, immigration is a national security issue that starts at the borders.

“Our world’s changed since 9/11,” Fischer said. “We need to implement an e-verify system that’s mandatory for businesses. I don’t support a path for citizenship for anyone who’s entered this country illegally. I don’t support incentives for illegal aliens who are in this country.”

Kerrey endorsed an immigration proposal from Republican presidential candidate Mitt Romney. Part of the Romney plan would create a path to legal status for undocumented immigrants who serve in the U.S. military.

“If you want to change the law, you’ve got to do it in a bipartisan way,” Kerrey said. “At what point are you sure that the borders are secure? At what point are you going to do something about the 11 million people who are here illegally who are causing tremendous problems for law enforcement at the local level? We need compromise here.”

After the debate Fischer supporter Bob Brummels, a farmer from Coleridge in northeastern Nebraska, remained unconvinced Bob Kerrey truly intends to be bipartisan.

“He specifically tried to make the point that he intended to move to the middle and be bipartisan,” Brummels said. “A person’s record speaks for itself. And the biggest point (Fischer) made was when she pointed out that he voted 92 percent of the time with the democrats.

Kerrey supporter Terry Sigler, a retired railroad worker from North Platte, felt Fischer is unprepared to deal with big problems like the deficit.

“I trust that (Kerrey) can get it back together. He’s worked across party lines. He knows Simpson-Bowles. He worked on the 9/11 Commission. We need an experienced person to go back to Washington.”

Fischer and Kerrey shared some common ground in the debate. Both said they support keeping the Renewable Fuel Standard in place requiring the use of ethanol in gasoline. And both expressed support for the state of Nebraska’s process to re-route the Keystone XL oil pipeline.

No more debates between Fischer and Kerrey have been scheduled, although the campaigns are believed to be negotiating future events.