Americans are buying less beef and more pork and poultry. Some ranchers want to pay for more ads, to boost sales at the supermarket. But proposals requiring ranchers to pay more for promotion and research have ignited a food fight in cattle country.

Charles Bassett wants you to buy hamburgers made from his Missouri cows. That’s why the Missouri rancher wants to pay an extra dollar into an industry-created fund every time he sells one of his cattle.

The fund is called a checkoff program – an industry-administered pool of money that is collected from producers for promotion, research, and marketing of a particular commodity. The checkoff functions similar to a tax. If enacted by a referendum of beef producers in the state, the money would be spent by a designated group (likely the Missouri Beef Council) on promoting Missouri beef.

“Me, myself, as an individual producer, as hard as I work and do the best job I can do, I don’t have time to leave my operation and promote my product,” Basset said. “I just don’t have (the time).”

Bassett, like all U.S. beef producers, already pays for a federal checkoff, which is responsible for the famous beef commercials with the slogan “Beef: It’s what’s for dinner.”

The federal Beef Checkoff program is controversial, however. Some ranchers say the funds aren’t transparent enough and some feel their money isn’t always directed to the right place. State organizations that would add to the beef industry’s bureaucracy have taken the checkoff debate out of Washington D.C. and brought it closer to home. 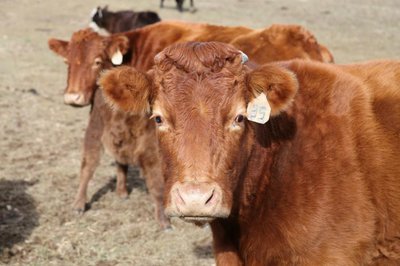 Missouri and other states will hold a referendum of ranchers to ask if they want to create a fund for the promotion of beef raised in the state. (Photo by Kristofor Husted, Harvest Public Media)

“By pooling my resources with other producers in Missouri, we’re able to have a full-time staff working for us every day, promoting our product,” he said.

In all, fourteen states, including Illinois, already have their own state checkoff on the books. Nebraska does not have a state beef checkoff. But many cattle producing states like Missouri, Iowa, and Oklahoma are considering the option.

“We want to stay competitive with our consumers and against our competing protein products out there,” said Nancy Jo Bateman, the executive director for the North Dakota Beef Commission, which is in charge of the checkoff money.

“What the beef industry has seen over the last 30-some years since the national checkoff started, our buying power for programs that help to increase demand for beef has been shrinking dramatically,“ she said.

“We have implemented television advertising during those tournaments and we’ve had tremendous feedback from both our producer base that their dollars are paying for this, as well as consumers who say they are just excited to see delicious looking beef,” Bateman said.

These ads are more important than ever, according to many beef producers, because Americans are buying less beef and buying a lot more chicken. To combat that, many cattle ranchers want the checkoff funds to go toward studying the health benefits of beef and how to lower production costs.

“There are concerns often by state level groups that the national organization may not being doing what would benefit that state the most,” said Gary Williams, a professor of agricultural economics at Texas A&M University. “Then they’ll add a state checkoff.”

Williams said decades of research suggests checkoff programs can be slightly effective, but there are so many other variables that affect demand.

“Foreign demand, oil problems, and wars and weather, all these other things have a whole lot more effect on demand than promotion does,” he said. “It’s a statistically significant impact but it’s relatively small.”

Ranchers in California decided against adding a state checkoff in 2012. Now, some beef producers are lining up against adding required contributions.

Roger Allison, a rancher in Howard County, Missouri, falls in line with the opposition. He said the federal checkoff hasn’t really helped him, so why would the state’s version?

“In the state of Missouri, we've lost over 40 percent of the cattle producers in this state since that period of time,” he said. “Consumer demand – they still say they’re going to increase, it dropped by 31 percent.”

Another reason ranchers oppose a state checkoff, Allison said, is that it’s a venue for large, commercial operations to control promotion at the expense of small farmers.

“Once they get the money, all of a sudden they feel like they got the control over beef producers in this state,” he said.

Ultimately, Missouri farmers will vote in April on whether to add the checkoff. What they decide will help shape the beef industry’s modern evolution.